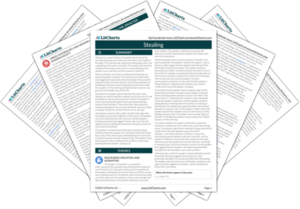 “Stealing” was written by the Scottish poet Carol Ann Duffy, who was Poet Laureate of the United Kingdom from 2009 to 2019. The poem's speaker is a bored, isolated person who feels "sick of the world" and routinely steals things just for the thrill of it. The speaker says that the strangest thing they ever stole was a snowman, which they later kicked apart, and ends the poem by frustratedly declaring that whoever is listening to this story doesn't understand the speaker at all. “Stealing” was first published in Duffy’s 1987 collection titled Selling Manhattan. 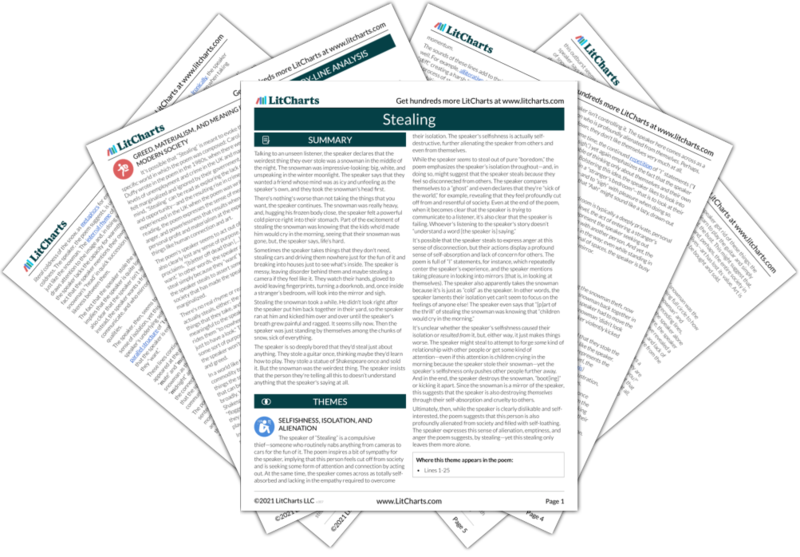 Get the entire guide to “Stealing” as a printable PDF.
Download

The Full Text of “Stealing”

The Full Text of “Stealing”

1The most unusual thing I ever stole? A snowman.

3beneath the winter moon. I wanted him, a mate

4with a mind as cold as the slice of ice

5within my own brain. I started with the head.

6Better off dead than giving in, not taking

7what you want. He weighed a ton; his torso,

8frozen stiff, hugged to my chest, a fierce chill

9piercing my gut. Part of the thrill was knowing

10that children would cry in the morning. Life's tough.

11Sometimes I steal things I don't need. I joy-ride cars

12to nowhere, break into houses just to have a look.

14I watch my gloved hand twisting the doorknob.

15A stranger's bedroom. Mirrors. I sigh like this — Aah.

16It took some time. Reassembled in the yard,

18and booted him. Again. Again. My breath ripped out

19in rags. It seems daft now. Then I was standing

20alone among lumps of snow, sick of the world.

21Boredom. Mostly I'm so bored I could eat myself.

22One time, I stole a guitar and thought I might

23learn to play. I nicked a bust of Shakespeare once,

24flogged it, but the snowman was the strangest.

25You don't understand a word I'm saying, do you?