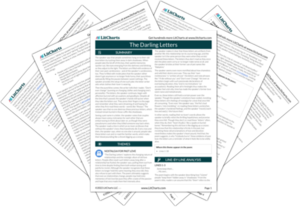 "The Darling Letters," by British poet Carol Ann Duffy, is about the way that relationships may change over time and how people often hang on to emblems of past love long after things have ended. The poem's speaker takes old love letters out every now and then, despite finding their use of cutesy nicknames and fierce declarations of undying love a bit mortifying in hindsight. While the letters read differently now than they once did, the speaker is still drawn to them because they're a reminder of the intensity, hopefulness, and joy of being deeply in love. The poem was published in Duffy's 1990 collection, The Other Country. 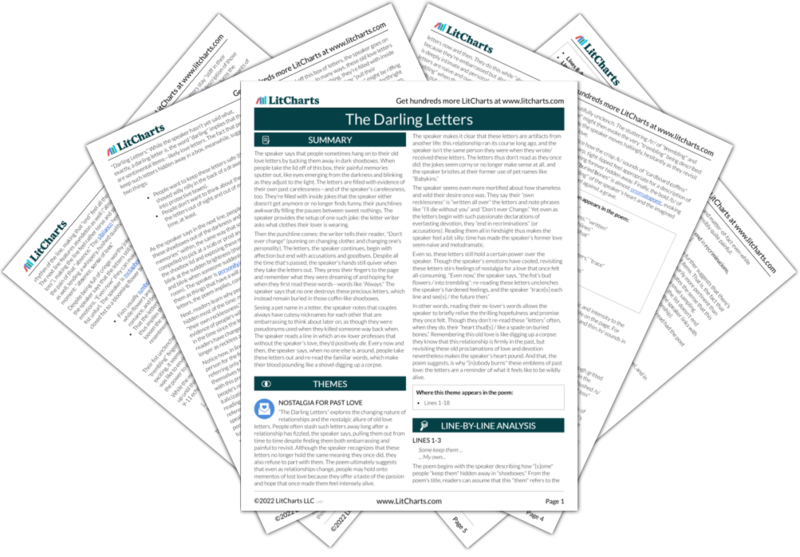 Get the entire guide to “The Darling Letters” as a printable PDF.
Download

The Full Text of “The Darling Letters”

The Full Text of “The Darling Letters”

1Some keep them in shoeboxes away from the light,

2sore memories blinking out as the lid lifts,

3their own recklessness written all over them. My own...

5fall flat in the gaps between the endearments. What

8They start with Darling; end in recriminations,

9absence, sense of loss. Even now, the fist's bud flowers

10into trembling, the fingers trace each line and see

11the future then. Always... Nobody burns them,

12the Darling letters, stiff in their cardboard coffins.

13Babykins... We all had strange names

14which make us blush, as though we'd murdered

15someone under an alias, long ago. I'll die

17we take them out to read again, the heart thudding