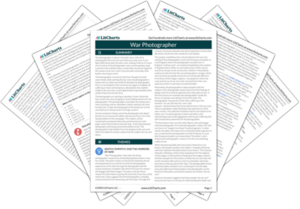 "War Photographer" is a poem by Scottish writer Carol Ann Duffy, the United Kingdom's poet laureate from 2009 to 2019. Originally published in 1985, "War Photographer" depicts the experiences of a photographer who returns home to England to develop the hundreds of photos he has taken in an unspecified war zone. The photographer wrestles with the trauma of what he has seen and his bitterness that the people who view his images are unable to empathize fully with the victims of catastrophic violence abroad. The poem references a number of major historical air strikes and clearly draws imagery from Nick Ut's famous Vietnam War photograph of children fleeing the devastation of a napalm bomb. 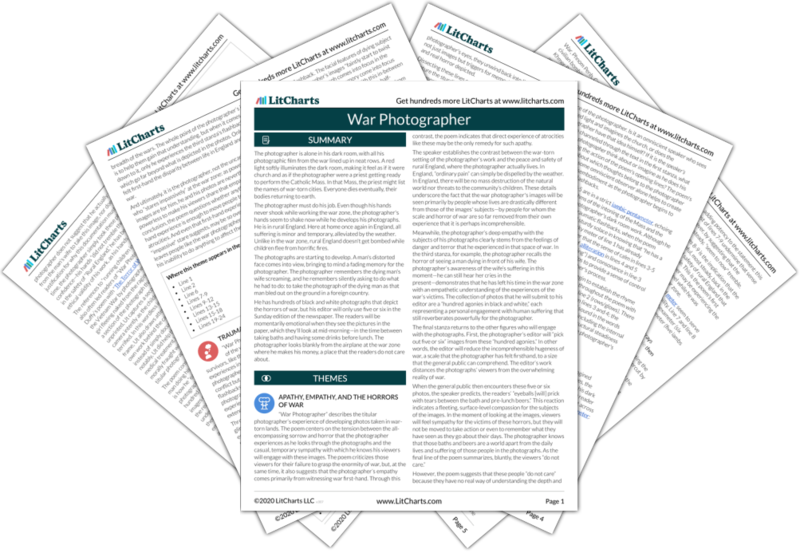 Get the entire guide to “War Photographer” as a printable PDF.
Download

The Full Text of “War Photographer”

The Full Text of “War Photographer”

1In his dark room he is finally alone

2with spools of suffering set out in ordered rows.

3The only light is red and softly glows,

4as though this were a church and he

5a priest preparing to intone a Mass.

7He has a job to do. Solutions slop in trays

8beneath his hands, which did not tremble then

10to ordinary pain which simple weather can dispel,

11to fields which don’t explode beneath the feet

12of running children in a nightmare heat.

13Something is happening. A stranger’s features

14faintly start to twist before his eyes,

15a half-formed ghost. He remembers the cries

16of this man’s wife, how he sought approval

17without words to do what someone must

18and how the blood stained into foreign dust.

19A hundred agonies in black and white

20from which his editor will pick out five or six

22with tears between the bath and pre-lunch beers.

23From the aeroplane he stares impassively at where

24he earns his living and they do not care.