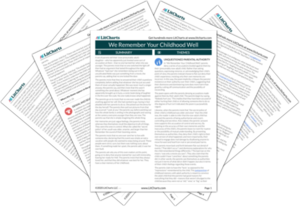 "We Remember Your Childhood Well" is a poem by British poet Carol Ann Duffy, published in her 1990 collection "The Other Country." Told from the perspective of parents responding to the accusations of their presumably grown child, it deals with the vastly different ways in which parents and children may remember the same events. The parents' authoritative tone suggests the harm parents may inflict on their children by refusing to acknowledge their children's point of view, while the poem's ambiguity allows readers to focus less on whose interpretation of events is right and more on the family's inability to communicate successfully. 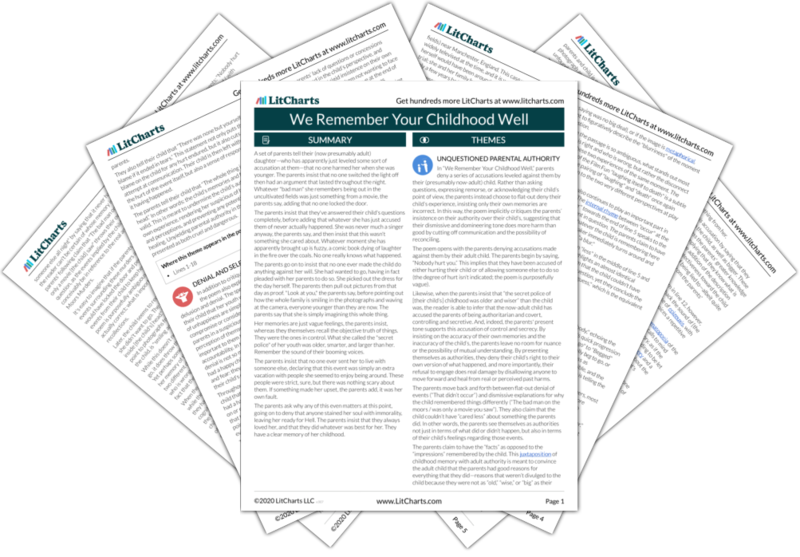 Get the entire guide to “We Remember Your Childhood Well” as a printable PDF.
Download

The Full Text of “We Remember Your Childhood Well”

The Full Text of “We Remember Your Childhood Well”

1Nobody hurt you. Nobody turned off the light and argued

2with somebody else all night. The bad man on the moors

3was only a movie you saw. Nobody locked the door.

4Your questions were answered fully. No. That didn't occur.

5You couldn't sing anyway, cared less. The moment's a blur, a Film Fun

6laughing itself to death in the coal fire. Anyone's guess.

7Nobody forced you. You wanted to go that day. Begged. You chose

8the dress. Here are the pictures, look at you. Look at us all,

9smiling and waving, younger. The whole thing is inside your head.

10What you recall are impressions; we have the facts. We called the tune.

11The secret police of your childhood were older and wiser than you, bigger

13Nobody sent you away. That was an extra holiday, with people

14you seemed to like. They were firm, there was nothing to fear.

15There was none but yourself to blame if it ended in tears.

16What does it matter now? No, no, nobody left the skidmarks of sin

17on your soul and laid you wide open for Hell. You were loved.

18Always. We did what was best. We remember your childhood well.