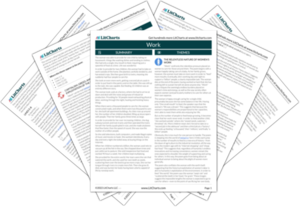 "Work," by British poet Carol Ann Duffy, links the exploitation of women's labor to humanity's exploitation of the earth. The poem follows a woman working tirelessly to provide for her growing brood, taking on new jobs that chart the development of human civilization—from the advent of agriculture and industry all the way up to the internet age. As the woman's children eventually number in the billions, she comes to represent all women throughout history as well as the earth itself. The woman eventually works herself to death, her attempts to provide for her offspring having drained her "to the bone." In this way, the poem becomes a metaphorical warning against both the relentless expectations of care historically placed on women and against environmental destruction caused by capitalist consumption. "Work" first appeared in Duffy's 2002 collection Feminine Gospels. 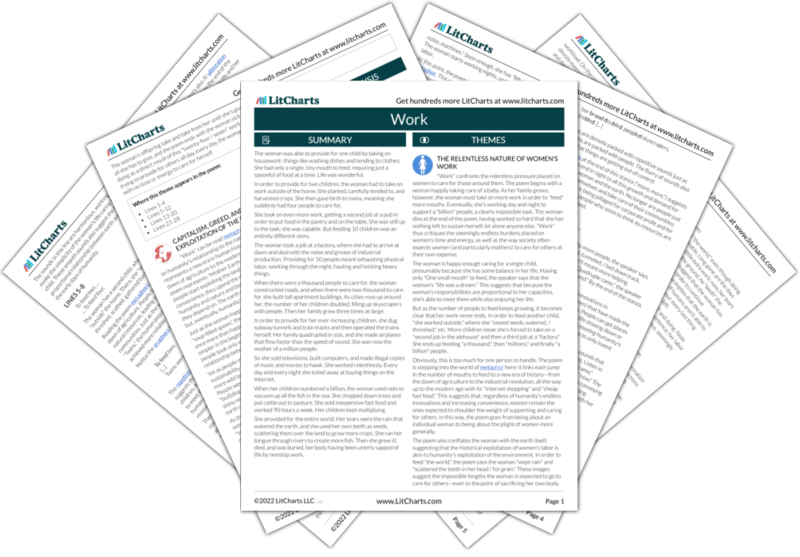 Get the entire guide to “Work” as a printable PDF.
Download

The Full Text of “Work”

The Full Text of “Work”

1To feed one, she worked from home,

3One small mouth, a soup-filled spoon,

4life was a dream.

6she worked outside, sewed seeds, watered,

8Twins were born. To feed four,

9she grafted harder, second job in the alehouse,

10food in the larder, food on the table,

11she was game, able. Feeding ten

12was a different kettle,

16on the night shift, schlepped, lifted.

17For a thousand more, she built streets,

27There was no stopping her. She slogged

28night and day at Internet shopping.

32a 90-hour week. Her offspring swelled. She fed

33the world, wept rain, scattered the teeth in her head

34for grain, swam her tongue in the river to spawn,

35sickened, died, lay in a grave, worked, to the bone,