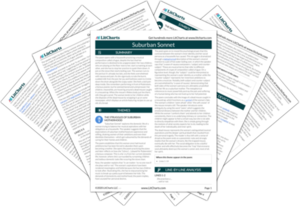 The Australian poet Gwen Harwood wrote “Suburban Sonnet” during the peak of her career in the late 1960s. In this poem, the speaker describes a typical day in the life of a suburban housewife who fruitlessly chases her dreams of becoming a professional musician. Through this exploration of the woman’s internal conflict, the speaker delivers a subversive commentary about the psychological and emotional ramifications of modern motherhood. In doing so, the speaker illustrates the tension between the woman's mundane life and her innermost fantasies while also subverting the traditional sonnet form. 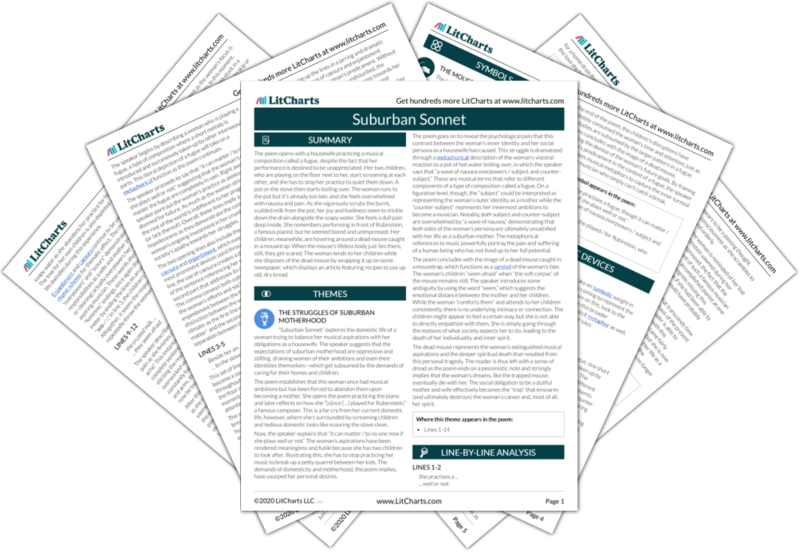 Get the entire guide to “Suburban Sonnet” as a printable PDF.
Download

The Full Text of “Suburban Sonnet”

The Full Text of “Suburban Sonnet”

1She practises a fugue, though it can matter

2to no one now if she plays well or not.

3Beside her on the floor two children chatter,

4then scream and fight. She hushes them. A pot

5boils over. As she rushes to the stove

6too late, a wave of nausea overpowers

7subject and counter-subject. Zest and love

8drain out with soapy water as she scours

9the crusted milk. Her veins ache. Once she played

10for Rubinstein, who yawned. The children caper

11round a sprung mousetrap where a mouse lies dead.

12When the soft corpse won't move they seem afraid.

13She comforts them; and wraps it in a paper