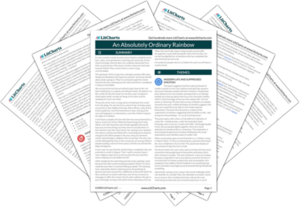 "An Absolutely Ordinary Rainbow" was written by the Australian poet Les Murray in 1969. The poem is set amidst the hustle and bustle of 1960s Sydney, which momentarily grinds to a halt due to the presence of a man openly weeping in a main square. The inhabitants of Sydney are by turns fascinated, moved, and appalled by the crying man. The man, for his part, is an ambiguous figure—someone who on the one hand seems like a kind of prophet or Christ-like savior, but on the other seems to be exactly what he looks like: a person crying, who doesn't have any "words" or "messages" to offer the onlookers. Above all, he seems to represent the ability to deeply feel and openly express emotion—something that the poem implies has been stifled by the busy modern world. 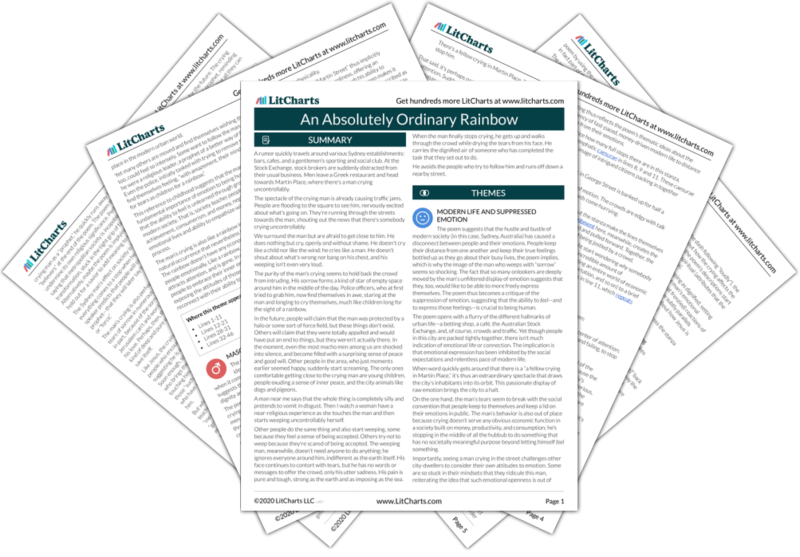 Get the entire guide to “An Absolutely Ordinary Rainbow” as a printable PDF.
Download

The Full Text of “An Absolutely Ordinary Rainbow”

The Full Text of “An Absolutely Ordinary Rainbow”

1The word goes round Repins,

2the murmur goes round Lorenzinis,

3at Tattersalls, men look up from sheets of numbers,

4the Stock Exchange scribblers forget the chalk in their hands

5and men with bread in their pockets leave the Greek Club:

6There's a fellow crying in Martin Place. They can't stop him.

8and drained of motion. The crowds are edgy with talk

9and more crowds come hurrying. Many run in the back streets

10which minutes ago were busy main streets, pointing:

11There's a fellow weeping down there. No one can stop him.

12The man we surround, the man no one approaches

13simply weeps, and does not cover it, weeps

15and does not declaim it, nor beat his breast, nor even

16sob very loudly—yet the dignity of his weeping

17holds us back from his space, the hollow he makes about him

18in the midday light, in his pentagram of sorrow,

19and uniforms back in the crowd who tried to seize him

20stare out at him, and feel, with amazement, their minds

21longing for tears as children for a rainbow.

22Some will say, in the years to come, a halo

23or force stood around him. There is no such thing.

24Some will say they were shocked and would have stopped him

25but they will not have been there. The fiercest manhood,

26the toughest reserve, the slickest wit amongst us

27trembles with silence, and burns with unexpected

28judgements of peace. Some in the concourse scream

29who thought themselves happy. Only the smallest children

30and such as look out of Paradise come near him

31and sit at his feet, with dogs and dusty pigeons.

32Ridiculous, says a man near me, and stops

33his mouth with his hands, as if it uttered vomit—

34and I see a woman, shining, stretch her hand

35and shake as she receives the gift of weeping;

37and many weep for sheer acceptance, and more

38refuse to weep for fear of all acceptance,

39but the weeping man, like the earth, requires nothing,

40the man who weeps ignores us, and cries out

41of his writhen face and ordinary body

42not words, but grief, not messages, but sorrow,

43hard as the earth, sheer, present as the sea—

44and when he stops, he simply walks between us

45mopping his face with the dignity of one

46man who has wept, and now has finished weeping.

47Evading believers, he hurries off down Pitt Street.