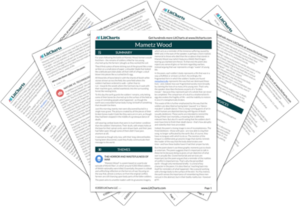 "Mametz Wood" was written in 2005 by British poet Owen Sheers. Mametz is a village in Northern France; the woodland nearby was the site of an especially bloody battle during World War I, in which around 4,000 men from the British Army's Welsh Regiment were killed. Sheers's poem is set many years later, and considers the way that, even a century after the conflict, the land around Mametz Wood is still filled with fragments of the dead soldiers' bodies. The poem is thus a consideration of the horrors of war, and is particularly effective in the way it places natural imagery side-by-side with the frightening and deadly power of human technology. 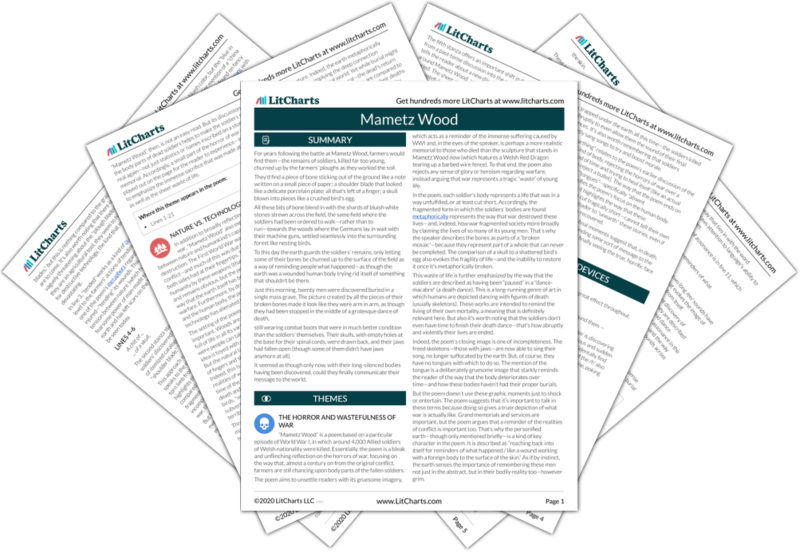 Get the entire guide to “Mametz Wood” as a printable PDF.
Download

The Full Text of “Mametz Wood”

The Full Text of “Mametz Wood”

1For years afterwards the farmers found them –

2the wasted young, turning up under their plough blades

3as they tended the land back into itself.

4A chit of bone, the china plate of a shoulder blade,

5the relic of a finger, the blown

6and broken bird’s egg of a skull,

7all mimicked now in flint, breaking blue in white

8across this field where they were told to walk, not run,

9towards the wood and its nesting machine guns.

10And even now the earth stands sentinel,

11reaching back into itself for reminders of what happened

12like a wound working a foreign body to the surface of the skin.

13This morning, twenty men buried in one long grave,

14a broken mosaic of bone linked arm in arm,

16in boots that outlasted them,

17their socketed heads tilted back at an angle

18and their jaws, those that have them, dropped open.

19As if the notes they had sung

20have only now, with this unearthing,

21slipped from their absent tongues.