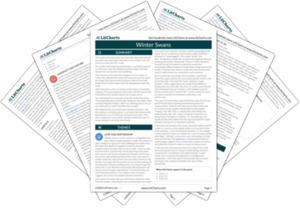 "Winter Swans" is a poem by contemporary British poet Owen Sheers. The premise of the poem is relatively straightforward: a couple who are having difficulties in their relationship go for a walk. It's been raining for days, seemingly reflecting the mood between the two people. While on their walk, the couple encounter some swans on a lake. The beauty and majesty of these swans gently remind the couple of the importance of their love, and by the poem's close, they are holding hands. Sheers's poems are often set in similar natural environments, and he is the anthologist behind A Poet's Guide to Britain—which groups together other nature poems along with some based in cities as well. 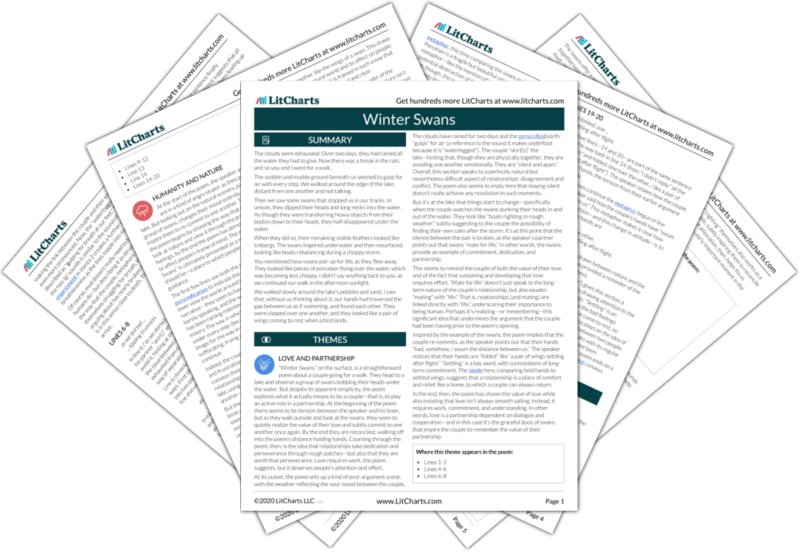 Get the entire guide to “Winter Swans” as a printable PDF.
Download

The Full Text of “Winter Swans”

The Full Text of “Winter Swans”

1The clouds had given their all -

2two days of rain and then a break

3in which we walked,

5gulping for breath at our feet

6as we skirted the lake, silent and apart,

7until the swans came and stopped us

8with a show of tipping in unison.

9As if rolling weights down their bodies to their heads

10they halved themselves in the dark water,

13'They mate for life' you said as they left,

14porcelain over the stilling water. I didn't reply

15but as we moved on through the afternoon light,

16slow-stepping in the lake's shingle and sand,

17I noticed our hands, that had, somehow,

18swum the distance between us

19and folded, one over the other,