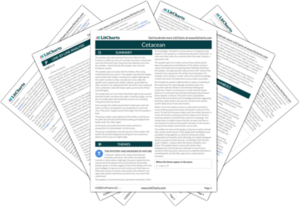 "Cetacean" was written by the contemporary British poet Peter Reading and published in his 2002 collection Faunal. The poem describes a boat trip to "observe" blue whales off the coast of San Francisco, and, for the most part, is relatively unsentimental and spare in its tone. At the same time, the poem conveys a sense of awe and wonder at the sight of the whales, even as the speaker attempts to quantify the experience using mathematical measurements and logical, scientific observations. The whales are gone almost as quickly as they appear, leaving behind an atmosphere of mystery surrounding the natural world. Some interpretations also view the poem as a kind of extended metaphor for the creative process itself, noting that moments of artistic inspiration are at once powerful and fleeting. 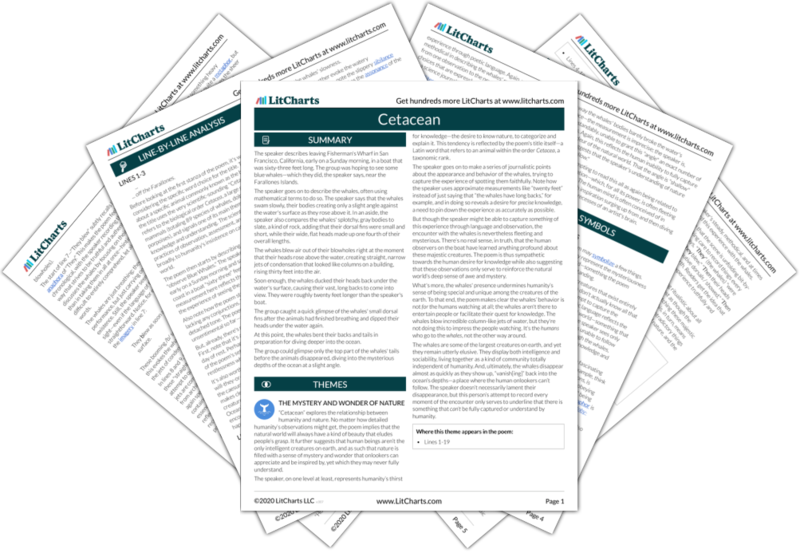 Get the entire guide to “Cetacean” as a printable PDF.
Download

The Full Text of “Cetacean”

The Full Text of “Cetacean”

4      They were swimming slowly, and rose at a shallow angle

5(they were grey as slate with white mottling, dorsals tiny and stubby,

6      with broad flat heads one quarter their overall body-lengths).

7They blew as soon as their heads began to break the surface.

8      The blows were as straight and slim as upright columns

10Then their heads disappeared underwater, and the lengthy, rolling

14showed briefly, after the blows had dispersed and the heads had

18Then the flukes were visible just before the creatures vanished,