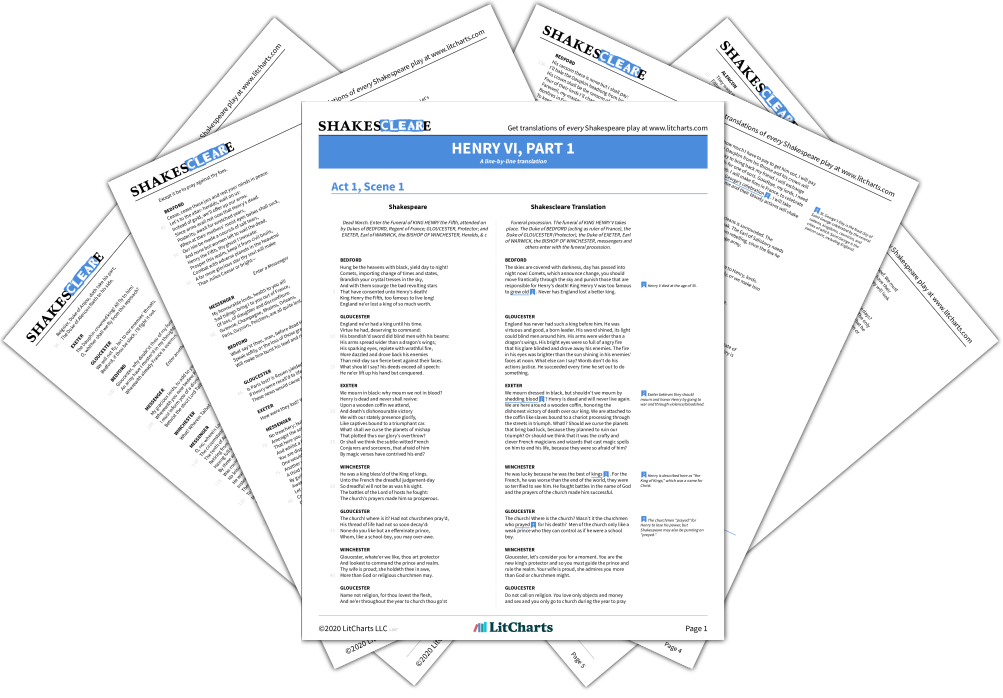 Download the entire Henry VI, Part 1 translation as a printable PDF!
Teachers and parents! Struggling with distance learning? Our Teacher Editions can help.

Enter SUFFOLK, in a discussion with KING HENRY VI, GLOUCESTER and EXETER.

Your wondrous rare description, noble earl, Of beauteous Margaret hath astonish'd me: Her virtues graced with external gifts Do breed love's settled passions in my heart: And like as rigor of tempestuous gusts Provokes the mightiest hulk against the tide, So am I driven by breath of her renown Either to suffer shipwreck or arrive Where I may have fruition of her love.

Noble earl, your wonderful description of the beautiful Margaret has astonished me. Her virtues, which seem to be enhanced with her external appearance have created feelings of love and passion in my heart. And like harsh violent winds your description provokes the largest vessel floating against the tide. So I am out of breath from her glory and am either going to suffer a shipwreck or arrive on shore where I may enjoy her love.

Tush, my good lord, this superficial tale Is but a preface of her worthy praise; The chief perfections of that lovely dame Had I sufficient skill to utter them, Would make a volume of enticing lines, Able to ravish any dull conceit: And, which is more, she is not so divine, So full-replete with choice of all delights, But with as humble lowliness of mind She is content to be at your command; Command, I mean, of virtuous chaste intents, To love and honour Henry as her lord.

Oh please, my good lord, this shallow tale is only an introduction of the praise of her true value. The greatest perfections of that lovely woman, if I had the skill, could make a whole book of beautiful poetry, capable of captivating any dull imagination. What's more, she is so heavenly, so full with a choice of all delights, but she has a modest and lowly state of mind. She is happy to be at your command. And by that I mean she has virtuous, chaste intentions to love and honor Henry as her lord.

And otherwise will Henry ne'er presume.Therefore, my lord protector, give consentThat Margaret may be England's royal queen.

Henry wouldn't want it any other way.

[To GLOUCESTER] Therefore, my lord protector, agree that Margaret may be the royal queen of England.

So should I give consent to flatter sin. You know, my lord, your highness is betroth'd Unto another lady of esteem: How shall we then dispense with that contract, And not deface your honour with reproach?

I might as well agree to praise sin. You know, my lord, that your king is engaged to another respectful lady. How should we deal with that betrothal and not deform your honor in disgrace?

As doth a ruler with unlawful oaths; Or one that, at a triumph having vow'd To try his strength, forsaketh yet the lists By reason of his adversary's odds: A poor earl's daughter is unequal odds, And therefore may be broke without offence.

Like a ruler does with illegal promises, or one that at a jousting tournament swore to try his strength but abandoned the designated combat arena because he saw his opponent was more likely to win. A daughter of a poor earl is a similar case and therefore may be broken off without any damage.

Why, what, I pray, is Margaret more than that?Her father is no better than an earl,Although in glorious titles he excel.

Well, is Margaret any more than a poor earl's daughter? Her father is no better than an earl, although he does have some worthy titles.

Yes, lord, her father is a king, The King of Naples and Jerusalem; And of such great authority in France As his alliance will confirm our peace And keep the Frenchmen in allegiance.

Yes, lord, her father is a king. He is the King of Naples and Jerusalem and holds great sway in France. An alliance with him will confirm our peace with France and keep the Frenchmen loyal to us.

And so the Earl of Armagnac may do,Because he is near kinsman unto Charles.

But the Earl of Armagnac may do the same because he is close to Charles.

Beside, his wealth doth warrant a liberal dower,Where Reignier sooner will receive than give.

Also, his wealth does promise a generous dower, while Reignier would rather receive than give.

A dower, my lords! disgrace not so your king, That he should be so abject, base and poor, To choose for wealth and not for perfect love. Henry is able to enrich his queen And not seek a queen to make him rich: So worthless peasants bargain for their wives, As market-men for oxen, sheep, or horse. Marriage is a matter of more worth Than to be dealt in by attorneyship; Not whom we will, but whom his grace affects, Must be companion of his nuptial bed: And therefore, lords, since he affects her most, It most of all these reasons bindeth us, In our opinions she should be preferr'd. For what is wedlock forced but a hell, An age of discord and continual strife? Whereas the contrary bringeth bliss, And is a pattern of celestial peace. Whom should we match with Henry, being a king, But Margaret, that is daughter to a king? Her peerless feature, joined with her birth, Approves her fit for none but for a king: Her valiant courage and undaunted spirit, More than in women commonly is seen, Will answer our hope in issue of a king; For Henry, son unto a conqueror, Is likely to beget more conquerors, If with a lady of so high resolve As is fair Margaret he be link'd in love. Then yield, my lords; and here conclude with me That Margaret shall be queen, and none but she.

A dowry, my lords! Don't disgrace your king so much as to think that he should be so hopeless, low, and poor to choose money over perfect love. Henry is perfectly able to give his queen money and does not need to look for one who would make him rich. Peasants who are worth nothing try to find their wives in such a way. They're like men in the market, selling oxen, sheep, or horse. But marriage should not be dealt with in negotiations between lawyers, and it's not about who we want but who his grace likes. She will be his companion in bed, after all! And therefore, lords, since he likes her the most, for that reason we should prefer her as well, and so she should be our first choice.  After all, what is a forced marriage but a never ending battle? While the opposite brings joy and is a way to heavenly peace. Then, who else should be matched with Henry, who is a king, than Margaret, who is the daughter of a king? Her unique physical appearance and her birth makes her perfect only for a king. Her brave courage and fearless spirit, which isn't usually seen in women, will be an answer to our hope of giving a child to the king. Henry, a conqueror's son, is likely to breed more conquerors if he is joined in union with a lady of such courage as Margaret. Give up, then, my lords and here I finish by saying that Margaret shall be queen, and no one but her.

Whether it be through force of your report, My noble Lord of Suffolk, or for that My tender youth was never yet attaint With any passion of inflaming love, I cannot tell; but this I am assured, I feel such sharp dissension in my breast, Such fierce alarums both of hope and fear, As I am sick with working of my thoughts. Take, therefore, shipping; post, my lord, to France; Agree to any covenants, and procure That Lady Margaret do vouchsafe to come To cross the seas to England and be crown'd King Henry's faithful and anointed queen: For your expenses and sufficient charge, Among the people gather up a tenth. Be gone, I say; for, till you do return, I rest perplexed with a thousand cares. And you, good uncle, banish all offence: If you do censure me by what you were, Not what you are, I know it will excuse This sudden execution of my will. And so, conduct me where, from company, I may revolve and ruminate my grief.

I don't know if it's because of the power of your account of her, my noble Lord of Suffolk, or because my young days have never been touched with any passion of love's fire, I can't really tell but I am sure that I feel a sharp pain in my chest. I feel passionate alarms of both hope and fear and it makes me sick trying to figure out my thoughts. Therefore, take a ship to France, my lord, and hurry. Agree to any terms and ensure that Lady Margaret will come across the seas to England and here be crowned King Henry's faithful and blessed queen. For your expenses and spending money for the journey, collect taxes from the people. Go, and until you return I will rest here puzzled by a thousand thoughts. And you, good uncle, let go of all your hatred. If you would judge me by your own former recklessness in your youth and not your older age, I know you will forgive me for my sudden change. And so, take me where I may consider and mediate on my melancholy of love alone.

Ay, grief, I fear me, both at first and last.

Yes, I am afraid it is the first and the last melancholy.

Thus Suffolk hath prevail'd; and thus he goes, As did the youthful Paris once to Greece, With hope to find the like event in love, But prosper better than the Trojan did. Margaret shall now be queen, and rule the king; But I will rule both her, the king and realm.

And so Suffolk has won and there he goes, like the young Paris once did to Greece, hoping to find the same outcome in love, but Suffolk will succeed better than the Trojan did. Margaret will now be queen and rule the king but I will rule her, the king and the country.