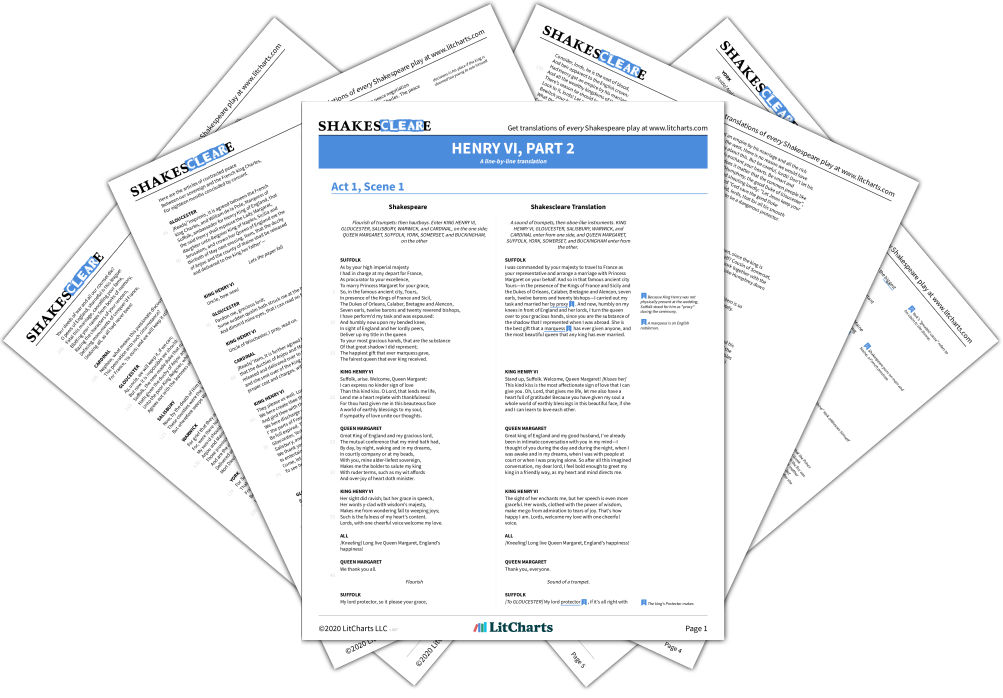 Download the entire Henry VI, Part 2 translation as a printable PDF!
Teachers and parents! Struggling with distance learning? Our Teacher Editions can help.

Enter KING HENRY VI with a supplication, and the QUEEN with SUFFOLK'S head, BUCKINGHAM and Lord SAY

KING HENRY VI enters with a petition, and the QUEEN with SUFFOLK'S head, BUCKINGHAM and Lord SAY.

Oft have I heard that grief softens the mind, And makes it fearful and degenerate; Think therefore on revenge and cease to weep. But who can cease to weep and look on this? Here may his head lie on my throbbing breast: But where's the body that I should embrace?

I have often heard that grief softens the mind, making it deteriorate with fear. So I should think about revenge and stop crying. But who can stop crying and look at this? His head may lie on my heaving chest, but where is the body that I would like to embrace?

What answer makes your grace to the rebels'supplication?

What do you say to the rebels' petition, your grace?

I'll send some holy bishop to entreat; For God forbid so many simple souls Should perish by the sword! And I myself, Rather than bloody war shall cut them short, Will parley with Jack Cade their general: But stay, I'll read it over once again.

I'll send a holy bishop to meet with them. God forbid that so many ordinary people should die violently! Rather than let them die in a bloody war, I'll go myself to negotiate with their general Jack Cade. But wait, I'll read it over once again.

Ah, barbarous villains! Hath this lovely face Ruled, like a wandering planet, over me, And could it not enforce them to relent, That were unworthy to behold the same?

Oh, barbaric villains! How did this lovely face rule over me like a moving planet, but wasn't able to force them to have mercy, since they were unworthy to look at him?

Lord Say, Jack Cade hath sworn to have thy head.

Lord Say, Jack Cade swore that he will have your head.

Ay, but I hope your highness shall have his.

Yes, but I hope that your highness shall have his.

How now, madam! Still lamenting and mourning for Suffolk's death? I fear me, love, if that I had been dead, Thou wouldst not have mourn'd so much for me.

How are you, madam? Are you still sad and grieving Suffolk's death? I am afraid that if I had been dead, love, you wouldn't have grieved so much for me.

No, my love, I should not mourn, but die for thee.

No, my love. I wouldn't have grieved, but I would have died for you.

How now! What news? Why comest thou in such haste?

What's the news? Why are you in such a hurry?

The rebels are in Southwark; fly, my lord! Jack Cade proclaims himself Lord Mortimer, Descended from the Duke of Clarence' house, And calls your grace usurper openly And vows to crown himself in Westminster. His army is a ragged multitude Of hinds and peasants, rude and merciless: Sir Humphrey Stafford and his brother's death Hath given them heart and courage to proceed: All scholars, lawyers, courtiers, gentlemen, They call false caterpillars, and intend their death.

The rebels are in Southwark. Run away, my lord! Jack Cade claims that he is Lord Mortimer, descended from the Duke of Clarence's house, and he openly calls you a usurper and swears that he will crown himself in Westminster. His army is a weary large group of servants and peasants, rough and merciless. The deaths of Sir Humphrey Stafford and his brother have given them strength and courage to carry on. They call all scholars, lawyers, courtiers and gentlemen treacherous parasites, and plan to kill them.

O graceless men! They know not what they do.

Oh, ignorant men! They don't know what they're doing.

My gracious lord, return to Killingworth,Until a power be raised to put them down.

My gracious lord, return to Killingworth, until an army is put together to stop them.

Ah, were the Duke of Suffolk now alive,These Kentish rebels would be soon appeased!

Ah, if the Duke of Suffolk were alive now, these Kentish rebels would be defeated very soon!

Lord Say, the traitors hate thee;Therefore away with us to Killingworth.

Lord Say, the traitors hate you. So come away with us to Killingworth.

So might your grace's person be in danger.The sight of me is odious in their eyes;And therefore in this city will I stayAnd live alone as secret as I may.

Then your grace might be in danger. They hate the sight of me. So I will stay in this city and go into hiding.

Jack Cade hath gotten London bridge: The citizens fly and forsake their houses: The rascal people, thirsting after prey, Join with the traitor, and they jointly swear To spoil the city and your royal court.

Jack Cade has gotten to London bridge. The citizens are running away and abandoning their houses. The rabble, thirsting after their prey, has joined the traitor. They all swear to plunder the city and your royal court.

Then linger not, my lord, away, take horse.

Then let's not stay here any longer. My lord, let's go, take a horse!

Come, Margaret; God, our hope, will succor us.

Come, Margaret. God, our hope, will help us.

My hope is gone, now Suffolk is deceased.

My hope is gone now that Suffolk is dead.

Farewell, my lord: trust not the Kentish rebels.

Trust nobody, for fear you be betray'd.

Don't trust anyone or you may be betrayed.

The trust I have is in mine innocence,And therefore am I bold and resolute.

I only trust my own innocence, and that's why I am brave and determined.