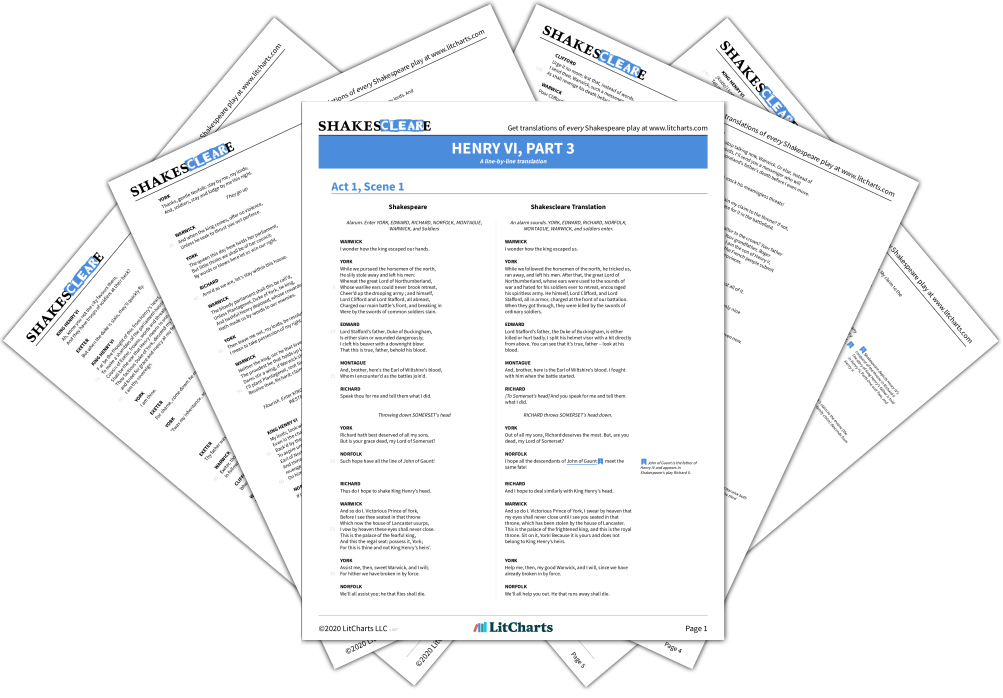 Great lords, wise men ne'er sit and wail their loss, But cheerly seek how to redress their harms. What though the mast be now blown overboard, The cable broke, the holding-anchor lost, And half our sailors swallow'd in the flood? Yet lives our pilot still. Is't meet that he Should leave the helm and like a fearful lad With tearful eyes add water to the sea And give more strength to that which hath too much, Whiles, in his moan, the ship splits on the rock, Which industry and courage might have saved? Ah, what a shame! Ah, what a fault were this! Say Warwick was our anchor; what of that? And Montague our topmast; what of him? Our slaughter'd friends the tackles; what of these? Why, is not Oxford here another anchor? And Somerset another goodly mast? The friends of France our shrouds and tacklings? And, though unskilful, why not Ned and I For once allow'd the skilful pilot's charge? We will not from the helm to sit and weep, But keep our course, though the rough wind say no, From shelves and rocks that threaten us with wreck, As good to chide the waves as speak them fair. And what is Edward but ruthless sea? What Clarence but a quicksand of deceit? And Richard but a ragged fatal rock? All these the enemies to our poor bark. Say you can swim; alas, 'tis but a while! Tread on the sand; why, there you quickly sink: Bestride the rock; the tide will wash you off, Or else you famish; that's a threefold death. This speak I, lords, to let you understand, If case some one of you would fly from us, That there's no hoped-for mercy with the brothers More than with ruthless waves, with sands and rocks. Why, courage then! What cannot be avoided 'Twere childish weakness to lament or fear.

Great lords, wise men never sit and cry about what they've lost. They cheerfully try to figure out how to make up their losses. So, what if the mast was blown overboard, the cable broke, the anchor was lost, and half of our sailors were drowned in the flood? Our captain is still alive. Is it right that he should abandon the wheel and like a fearful little boy add water to the sea with his tears, giving more strength to the sea that has too much water already, while, as he moans, the ship is dashed to pieces on the rock when it could have been saved by hard work and courage? Ah, what a shame that would be! Ah, what a terrible mistake this would be! Maybe Warwick was our anchor—who cares? Maybe Montague was our sail—get over it! And our slaughtered friends were the rigging—let's move on! Isn't Oxford another anchor? Isn't Somerset another mast? Aren't our French allies our ropes? And although we don'st have much skill in battle, why shouldn't my son little Ned and I for once be allowed to take charge as captains? We won't sit and cry at the wheel, but we'll keep to our path and avoid the rocks and dangers, even if the rough winds tries to shipwreck us. We'll do better by attacking the waves than speaking gently and sweetly about them. And isn't Edward only a merciless sea? And Clarence only a deceitful quicksand? And Richard only an uneven deadly rock? All these are the enemies of our poor ship. Maybe you can swim, but that will only keep you alive for a while! Step on the sand and there you will quickly sink. Sit upon the rock, the tide will wash you off, or else you will starve. That's three ways to die. I speak all this, lords, to make myself clear that if one of you wants to desert us, you won't get any more mercy from those brother than you'd get from merciless waves or quicksand or rocks. Take courage then! It's childish weakness to fear and cry about what you can't avoid.

Methinks a woman of this valiant spirit Should, if a coward heard her speak these words, Infuse his breast with magnanimity And make him, naked, foil a man at arms. I speak not this as doubting any here For did I but suspect a fearful man He should have leave to go away betimes, Lest in our need he might infect another And make him of like spirit to himself. If any such be here—as God forbid!— Let him depart before we need his help.

I think a woman with such a brave spirit as my mother has could fill a coward's fearful heart with courage with her words, inspiring him to defeat an armed man with his bare hands. I don't say this doubting any of your bravery, because if I did suspect that any of you were fearful, I'd make you leave immediately to prevent you from infecting anyone else with your cowardice in our time of need. If that applies to anyone here—God forbid!—he should leave before we need his help.

Women and children of so high a courage, And warriors faint! Why, 'twere perpetual shame. O brave young prince! Thy famous grandfather Doth live again in thee: long mayst thou live To bear his image and renew his glories!

Can you believe it, incredible courage from women and children, and weakness from warriors! This shame will last forever. Oh, brave young prince, your triumphant grandfather, Henry the Fifth, lives again in you. Live long and be like him, just as glorious in victory!

And he that will not fight for such a hope.Go home to bed, and like the owl by day,If he arise, be mock'd and wonder'd at.

And anyone who won't fight for such a hope as that, go home to bed. Like an owl who is seen awake during the day, if you're a coward, you'll be mocked and treated like a strange creature.

Thanks, gentle Somerset; sweet Oxford, thanks.

Thanks, gentle Somerset. Thanks, sweet Oxford.

And take his thanks that yet hath nothing else.

And take thanks from me since I have nothing else yet to give.

Prepare you, lords, for Edward is at hand.Ready to fight; therefore be resolute.

Get ready, lords. Edward is near. He is ready to fight and so be bold.

I thought no less: it is his policyTo haste thus fast, to find us unprovided.

I thought this would happen. It's his strategy to hurry so quickly and find us unprepared.

But he's deceived; we are in readiness.

But we've got him this time because we are prepared.

This cheers my heart, to see your forwardness.

It makes me happy to see your confidence.

Here pitch our battle; hence we will not budge.

Let's have the battle right here. We will not move from this spot.

Brave followers, yonder stands the thorny wood, Which, by the heavens' assistance and your strength, Must by the roots be hewn up yet ere night. I need not add more fuel to your fire, For well I wot ye blaze to burn them out Give signal to the fight, and to it, lords!

My brave followers! Here's this army like a thorny wood. By the help of God, and the help all of your strength, men, we will cut these men down on the field like trees in a forest before the night is over. I don't need to add any more fuel to your fire, because I know that you're burning to tear these men down. Give the signal to fight, and go for it, lords!

Lords, knights, and gentlemen, what I should say My tears gainsay; for every word I speak, Ye see, I drink the water of mine eyes. Therefore, no more but this: Henry, your sovereign, Is prisoner to the foe; his state usurp'd, His realm a slaughter-house, his subjects slain, His statutes cancell'd and his treasure spent; And yonder is the wolf that makes this spoil. You fight in justice: then, in God's name, lords, Be valiant and give signal to the fight.

Lords, knights, and gentlemen, my tears will contradict whatever I would say. You see, my tears drip down my cheek with every word I speak. Therefore, I'll say nothing else but this: Henry, your king, is our enemy's prisoner, his throne has been usurped, his country has been made a slaughter-house, his people have been killed, his laws have been spoken, and his money has been spent. And over there is the wolf behind it all. You fight on the side of justice. Then, in God's name, lords, be brave and give the signal to fight.

An alarm sounds. A signal is heard telling the soldiers to retreat to their own sides. There is fighting across the stage. All exit.