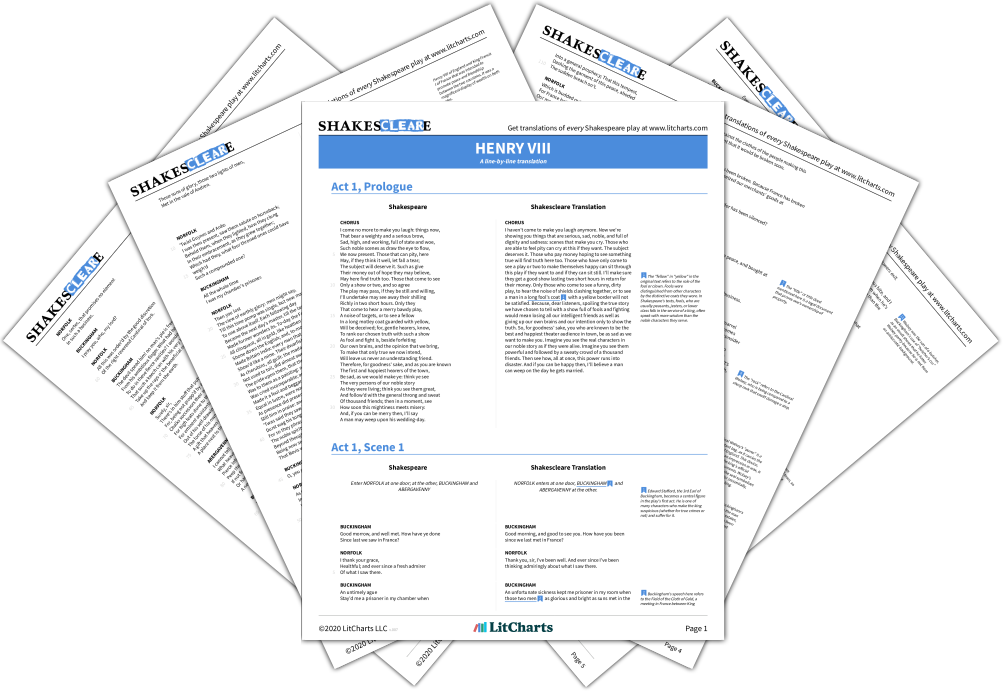 Download the entire Henry VIII translation as a printable PDF!
Teachers and parents! Struggling with distance learning? Our Teacher Editions can help.

Noise and tumult within. Enter Porter and his Man

There are loud noises inside. The PORTER and his SERVANT enter.

Stop this noise now, you jerks. Do you think the court is a public amusement park? You rude slaves, shut your mouths.

Good master porter, I belong to the larder.

Mister porter, I work in the kitchen.

Belong to the gallows, and be hanged, ye rogue! is this a place to roar in? Fetch me a dozen crab-tree staves, and strong ones: these are but switches to 'em. I'll scratch your heads: you must be seeing christenings? do you look for ale and cakes here, you rude rascals?

Work in a noose and be hanged, you rogue! Is this somewhere to roar? Get me a dozen wooden poles, and strong ones. These ones are just twigs compared to those. I'll scratch your heads. You insist on seeing baptisms? Do you expect beer and cake here, you rude jerks?

Pray, sir, be patient: 'tis as much impossible— Unless we sweep 'em from the door with cannons— To scatter 'em, as 'tis to make 'em sleep On May-day morning; which will never be: We may as well push against Powle's, as stir em.

Please sir, calm down. It's impossible—unless we blast them away from the door with cannons—to make them go away, as impossible as making them sleep on May-day morning. That will never happen. We might as well be pushing against St. Paul's cathedral, they'll be just as hard to move.

How got they in, and be hang'd?

How did they get in, damn you?

Alas, I know not; how gets the tide in? As much as one sound cudgel of four foot— You see the poor remainder—could distribute, I made no spare, sir.

I don't know. How does the tide get in? I didn't spare my four-foot long staff in hitting them. You see what's left of it.

You did nothing, sir.

You did nothing, sir.

I'm not a hero like Samson or Sir Guy or Colbrand. I couldn't mow them down in front of me. I didn't refrain from hitting anyone's head, young or old, man or woman, anyone with an unfaithful wife or anyone cheating with someone else's wife. If I did, let me never see meat again, and I wouldn't make that bargain in exchange for a cow, God bless it!

Do you hear, master porter?

Are you listening, mister porter?

I shall be with you presently, good master puppy.Keep the door close, sirrah.

I'll be with you soon, mister dog. Keep the door closed, you.

What would you have me do?

What do you want me to do?

What should you do, but knock 'em down by the dozens? Is this Moorfields to muster in? or have we some strange Indian with the great tool come to court, the women so besiege us? Bless me, what a fry of fornication is at door! On my Christian conscience, this one christening will beget a thousand; here will be father, godfather, and all together.

What would you do except knock them down by the dozens? Is this a public field to meet in? Or do we have some strange Indian with a huge tool visiting court to make the women attack us like this? Bless me, what a fornicating mob is at the door! On my Christian conscience, this one baptism will cause a thousand more. Here are the future fathers and godfathers all gathered together.

The spoons will be the bigger, sir. There is a fellow somewhat near the door, he should be a brazier by his face, for, o' my conscience, twenty of the dog-days now reign in's nose; all that stand about him are under the line, they need no other penance: that fire-drake did I hit three times on the head, and three times was his nose discharged against me; he stands there, like a mortar-piece, to blow us. There was a haberdasher's wife of small wit near him, that railed upon me till her pinked porringer fell off her head, for kindling such a combustion in the state. I missed the meteor once, and hit that woman; who cried out 'Clubs!' when I might see from far some forty truncheoners draw to her succor, which were the hope o' the Strand, where she was quartered. They fell on; I made good my place: at length they came to the broom-staff to me; I defied 'em still: when suddenly a file of boys behind 'em, loose shot, delivered such a shower of pebbles, that I was fain to draw mine honour in, and let 'em win the work: the devil was amongst 'em, I think, surely.

The presents will be all the bigger, sir. There's a fellow kind of near the door. I think he's a smith from his face, because his face looks as hot as the dog days of summer. Everyone standing around him is in the southern hemisphere. They don't need to burn in hell because they're already in it. I hit that dragon three times on the head and three times his nose was discharged at me. He stands there like a bomb ready to blow us up. There was a dumb clothes-seller's wife near him who shouted at me until her hat, which looked like a decorated bowl, fell off her head, for starting such a fire in the country. I missed the meteor-like man once and hit that woman. She cried out "clubs!" and I could see about forty people with clubs run to help her. They were the best hope in the Strand, where she was. They attacked. I defended myself. Finally they were hitting me and I kept defying them. Suddenly, a group of boys behind them threw such a number of pebbles that I had to let them win the battle. The devil was fighting with them, for sure.

These are the youths that thunder at a playhouse, and fight for bitten apples; that no audience, but the tribulation of Tower-hill, or the limbs of Limehouse, their dear brothers, are able to endure. I have some of 'em in Limbo Patrum, and there they are like to dance these three days; besides the running banquet of two beadles that is to come.

Those are the boys who make such noise at a play and fight for bitten apples. No audience except the worst ones at Tower-hill or the similar ones at Limehouse can stand them. I have some of them locked up and they'll stay there for three days. And the noise will be worse when the officials meant to keep the peace arrive.

Mercy o' me, what a multitude are here! They grow still too; from all parts they are coming, As if we kept a fair here! Where are these porters, These lazy knaves? Ye have made a fine hand, fellows: There's a trim rabble let in: are all these Your faithful friends o' the suburbs? We shall have Great store of room, no doubt, left for the ladies, When they pass back from the christening.

Lord, what a crowd is here! It's still growing, too. They're coming from everywhere as if this were a fair! Where are those porters, those lazy good-for-nothings? You've done well, fellows. You've let in a nice crowd. Are these all your good friends from town? No doubt we'll have plenty of room left for the ladies when they come back from the baptism.

An't please your honour, We are but men; and what so many may do, Not being torn a-pieces, we have done: An army cannot rule 'em.

Your honor, we're only human. And we've done what two men can do without being torn to pieces. An army couldn't stop them.

As I live, If the king blame me for't, I'll lay ye all By the heels, and suddenly; and on your heads Clap round fines for neglect: ye are lazy knaves; And here ye lie baiting of bombards, when Ye should do service. Hark! the trumpets sound; They're come already from the christening: Go, break among the press, and find a way out To let the troop pass fairly; or I'll find A Marshalsea shall hold ye play these two months.

I swear if the king blames me for it, I'll knock you over immediately. And I'll fine you for neglecting your jobs. You're lazy good-for-nothings. You lie here drinking when you should be working. Listen! The trumpets are sounding. They've already come from the baptism. Go on, make a break in the crowd to let them pass. Or I'll find a jail to hold you for two months.

Make way there for the princess.

Make room for the princess.

You great fellow,Stand close up, or I'll make your head ache.

You i' the camlet, get up o' the rail;I'll peck you o'er the pales else.

You in the camel-hair cloth, get on the fence or I'll throw you over it.