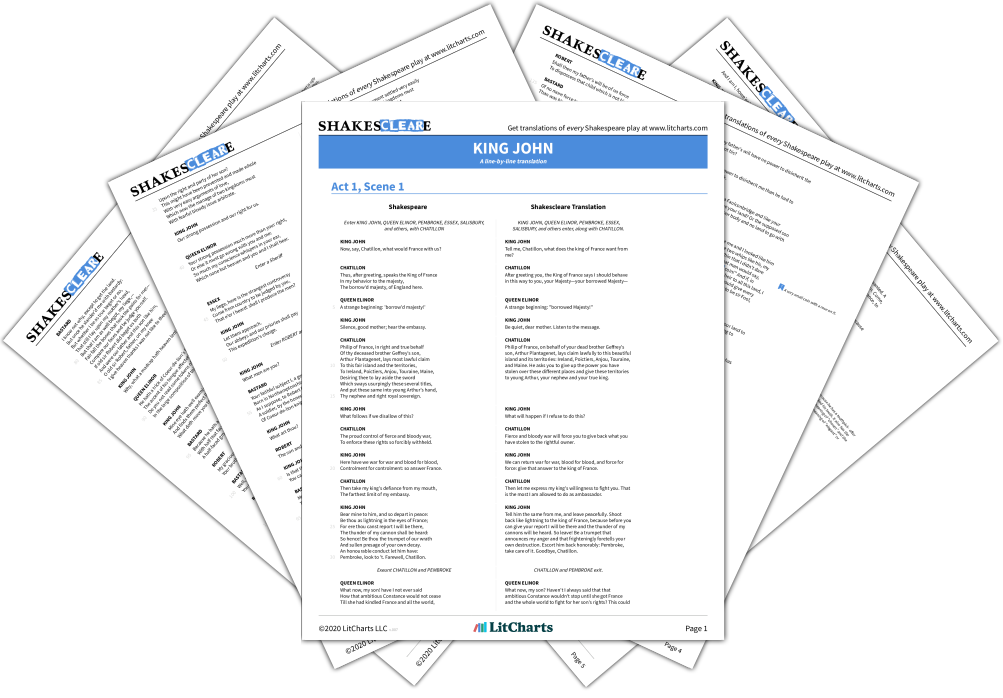 Download the entire King John translation as a printable PDF!
Teachers and parents! Struggling with distance learning? Our Teacher Editions can help.

It is too late: the life of all his blood Is touch'd corruptibly, and his pure brain, Which some suppose the soul's frail dwelling-house, Doth by the idle comments that it makes Foretell the ending of mortality.

It's too late. His blood is too infected and his pure brain, which is where some people think the soul lives, shows that he's going to die by the meaningless comments it makes.

His highness yet doth speak, and holds belief That, being brought into the open air, It would allay the burning quality Of that fell poison which assaileth him.

The king still speaks and believes that if he were brought outside, the open air would calm the burning of the deadly poison that attacks him.

Let him be brought into the orchard here.Doth he still rage?

Have him brought into the orchard here. Is he still talking crazily?

He is more patientThan when you left him; even now he sung.

He's calmer than when you left him. He was singing just now.

O vanity of sickness! fierce extremes In their continuance will not feel themselves. Death, having prey'd upon the outward parts, Leaves them invisible, and his siege is now Against the mind, the which he pricks and wounds With many legions of strange fantasies, Which, in their throng and press to that last hold, Confound themselves. 'Tis strange that death should sing. I am the cygnet to this pale faint swan, Who chants a doleful hymn to his own death, And from the organ-pipe of frailty sings His soul and body to their lasting rest.

Oh, that's the nonsense of sickness! Fierce extremes come one after the other, without him realizing it. Death, having preyed on the outer parts of the body, invisibly leaves them and now attacks the mind, which he stabs and wounds with many troops of strange delusions that, as they crowd and push towards that last fortress, confuse each other. It's strange that death would sing. I am the cygnet of this pale weak swan that chants a sad hymn about his own death and, using his weakness as an instrument to accompany him, sings his body and soul to eternal sleep.

Be of good comfort, prince; for you are bornTo set a form upon that indigestWhich he hath left so shapeless and so rude.

Take comfort, prince. You were born to give shape to the shapeless and rough mess he's left behind.

Enter Attendants, and BIGOT, carrying KING JOHN in a chair

BIGOT enters with servants carrying KING JOHN in a chair.

Ay, marry, now my soul hath elbow-room; It would not out at windows nor at doors. There is so hot a summer in my bosom, That all my bowels crumble up to dust: I am a scribbled form, drawn with a pen Upon a parchment, and against this fire Do I shrink up.

Oh good, now my soul has elbow-room. It wouldn't leave from windows or doors. There's so hot a summer in my chest that all my intestines crumble into dust. I am a scribbled shape drawn with a pen on parchment and I shrivel up in the fire.

How fares your majesty?

How are you, your majesty?

Poison'd,—ill fare—dead, forsook, cast off: And none of you will bid the winter come To thrust his icy fingers in my maw, Nor let my kingdom's rivers take their course Through my burn'd bosom, nor entreat the north To make his bleak winds kiss my parched lips And comfort me with cold. I do not ask you much, I beg cold comfort; and you are so strait And so ingrateful, you deny me that.

Poisoned—bad food—dead, abandoned, thrown away. None of you is willing to ask the winter to come shove his icy fingers in my mouth or let my kingdom's rivers run through my burned chest or beg the north to make his cold winds kiss my dry lips and comfort me with cold. I don't ask you much, I beg for cold comfort. And yet you're so greedy and ungrateful that you deny me that.

O that there were some virtue in my tears,That might relieve you!

Oh, I wish my tears were medicine that could help you!

The salt in them is hot. Within me is a hell; and there the poison Is as a fiend confined to tyrannize On unreprievable condemned blood.

The salt in them is hot. There's a hell inside me. The poison is like a devil locked up in there. It's torturing my blood as if the blood were sinners in Hell who would never be forgiven by God, condemned to suffer forever.

O, I am scalded with my violent motion,And spleen of speed to see your majesty!

Oh, I'm sweating after rushing here to see you, your majesty!

O cousin, thou art come to set mine eye: The tackle of my heart is crack'd and burn'd, And all the shrouds wherewith my life should sail Are turned to one thread, one little hair: My heart hath one poor string to stay it by, Which holds but till thy news be uttered; And then all this thou seest is but a clod And module of confounded royalty.

Oh cousin, you've come to shut my eye. The rope of my heart is cracked and burned, and all the sails of my life's boat now hang by one thread, one little hair. My heart has one poor string to set its course with, which will only hold until you tell your news. Then all you see here will just be a lump and a mess of disordered royalty.

The Dauphin is preparing hitherward, Where heaven He knows how we shall answer him; For in a night the best part of my power, As I upon advantage did remove, Were in the Washes all unwarily Devoured by the unexpected flood.

The Dauphin is preparing to come here, where God knows we'll fight him. Tonight I moved most of my army to a more strategic position and they were all drowned unexpectedly in the marshes.

You breathe these dead news in as dead an ear.My liege! my lord! but now a king, now thus.

You say this dead news in an ear that's just as dead. My king! My lord! Just now he was a king, now he's this.

Even so must I run on, and even so stop.What surety of the world, what hope, what stay,When this was now a king, and now is clay?

I too must run on like this and stop like this. What certainty is there in the world, what hope, what security, when this was a king until just before now, and now is clay?

Art thou gone so? I do but stay behind To do the office for thee of revenge, And then my soul shall wait on thee to heaven, As it on earth hath been thy servant still. Now, now, you stars that move in your right spheres, Where be your powers? show now your mended faiths, And instantly return with me again, To push destruction and perpetual shame Out of the weak door of our fainting land. Straight let us seek, or straight we shall be sought; The Dauphin rages at our very heels.

[To KING JOHN's body] Are you gone? I only stay behind to take revenge for you; then my soul will accompany you to heaven just as it was always your servant on earth. Now, now, you nobles like stars that now move in your proper trajectories, where is your army? Show your new loyalty and come back with me now to push destruction and eternal shame out of the weak door of our fainting country. Let's attack immediately, or we will be attacked immediately. The Dauphin is biting at our heels.

It seems you know not, then, so much as we: The Cardinal Pandulph is within at rest, Who half an hour since came from the Dauphin, And brings from him such offers of our peace As we with honour and respect may take, With purpose presently to leave this wa r.

It seems you don't know as much as we do, then. The Cardinal Pandulph is inside sleeping. Half an hour ago he came from the Dauphin and brings from him offers of peace that we can accept with honor and respect. He wants to stop fighting at once.

He will the rather do it when he seesOurselves well sinewed to our defence.

He will do it more willingly when he sees us well-prepared to defend ourselves.

Nay, it is in a manner done already; For many carriages he hath dispatch'd To the sea-side, and put his cause and quarrel To the disposing of the cardinal: With whom yourself, myself and other lords, If you think meet, this afternoon will post To consummate this business happily.

No, in a way it's already done because he's sent most of his army to the seashore, and given his cause and demands to the cardinal to negotiate for him. If you think it right, you and me and other lords will hurry to the cardinal this afternoon to end this business well.

Let it be so: and you, my noble prince,With other princes that may best be spared,Shall wait upon your father's funeral.

Very well. And you, my noble prince, will attend your father's funeral along with the other noblemen we can spare most easily.

At Worcester must his body be interr'd;For so he will'd it.

His body must be buried at Windsor; that's what he wanted.

Thither shall it then: And happily may your sweet self put on The lineal state and glory of the land! To whom with all submission, on my knee I do bequeath my faithful services And true subjection everlastingly.

It will be taken there then. And may you yourself happily take on your inherited power over this country! [Kneels] I promise you on my knee to serve you obediently and always to be a faithful subject.

And the like tender of our love we make,To rest without a spot for evermore.

And I make the same promise of pure love that will go on forever.

I have a kind soul that would give you thanksAnd knows not how to do it but with tears.

My soul thanks you, and I'm the sort of person who doesn't know how to thank you except by crying.

O, let us pay the time but needful woe, Since it hath been beforehand with our griefs. This England never did, nor never shall, Lie at the proud foot of a conqueror, But when it first did help to wound itself. Now these her princes are come home again, Come the three corners of the world in arms, And we shall shock them. Nought shall make us rue, If England to itself do rest but true.

Oh, let's be as sad as we need to at this time, since it has given us a lot to be sad about. This England never did and never will lie at the foot of a proud conqueror, except when it has first helped him by wounding itself. Now that its nobles have come home again, let the three corners of the world come to fight us, and we'll destroy them. Nothing will hurt us if England just stays faithful to itself.