The Merry Wives of Windsor

The Merry Wives of Windsor 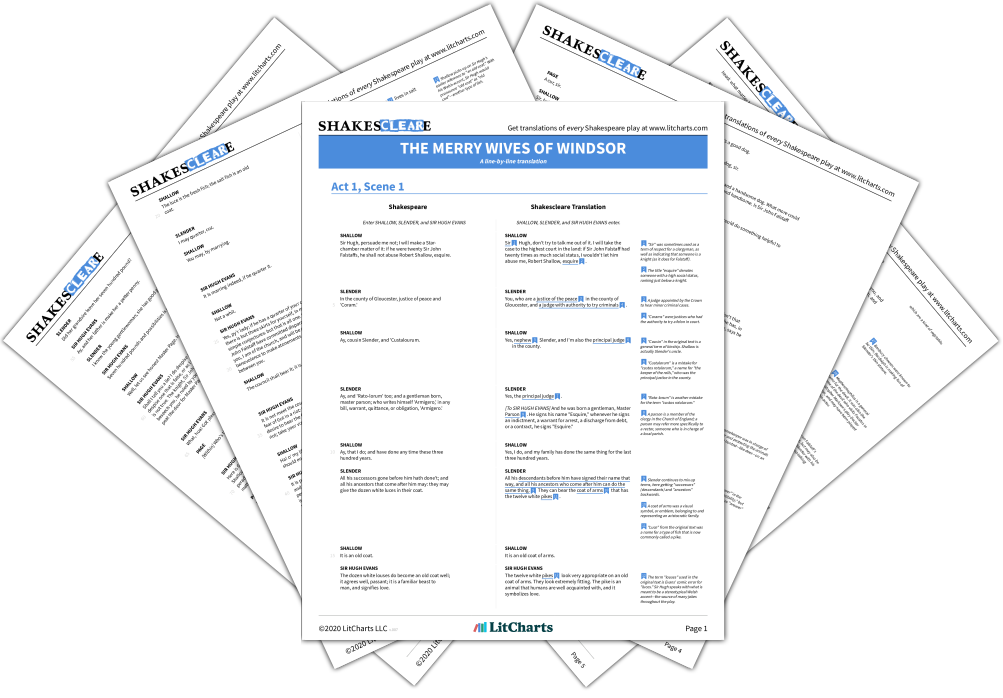 You can also download the entire The Merry Wives of Windsor  translation as a PDF!

Download the entire The Merry Wives of Windsor  translation! (PDF)

FENTON and the HOST enter.

Master Fenton, talk not to me; my mind is heavy: Iwill give over all.

Master Fenton, don't talk to me, I'm feeling very low. I'm going to give up on everything.

Yet hear me speak. Assist me in my purpose,And, as I am a gentleman, I'll give theeA hundred pound in gold more than your loss.

Just listen to me. Help me carry out my plan, and I promise, on my word as a gentleman, that I'll give you a hundred pounds more than you lost, in gold.

I will hear you, Master Fenton; and I will at theleast keep your counsel.

I'll listen to you, Master Fenton. At the very least I'll keep what you say a secret.

From time to time I have acquainted you With the dear love I bear to fair Anne Page; Who mutually hath answer'd my affection, So far forth as herself might be her chooser, Even to my wish: I have a letter from her Of such contents as you will wonder at; The mirth whereof so larded with my matter, That neither singly can be manifested, Without the show of both; fat Falstaff Hath a great scene: the image of the jest I'll show you here at large. Hark, good mine host. To-night at Herne's oak, just 'twixt twelve and one, Must my sweet Nan present the Fairy Queen; The purpose why, is here: in which disguise, While other jests are something rank on foot, Her father hath commanded her to slip Away with Slender and with him at Eton Immediately to marry: she hath consented: Now, sir, Her mother, ever strong against that match And firm for Doctor Caius, hath appointed That he shall likewise shuffle her away, While other sports are tasking of their minds, And at the deanery, where a priest attends, Straight marry her: to this her mother's plot She seemingly obedient likewise hath Made promise to the doctor. Now, thus it rests: Her father means she shall be all in white, And in that habit, when Slender sees his time To take her by the hand and bid her go, She shall go with him: her mother hath intended, The better to denote her to the doctor, For they must all be mask'd and vizarded, That quaint in green she shall be loose enrobed, With ribands pendent, flaring 'bout her head; And when the doctor spies his vantage ripe, To pinch her by the hand, and, on that token, The maid hath given consent to go with him.

From time to time I've told you about how much I love Anne Page. She loves me in return, insofar as she can choose her own husband, just the way I would want. I've received a letter from her that said some things that will surprise you. The humorous material in it was so mixed up with the serious material that you couldn't look at one without looking at the other. There's a description of a big scene involving fat Falstaff— I'll show you the whole description of the joke. Pay attention, my good host. Tonight at Herne's oak, just between midnight and one o'clock, my sweet Nan is supposed to dress up as the Fairy Queen—she explains why here. While she's disguised, and while lots of other pranks are happening at the same time, her father has ordered her to sneak away with Slender and go with him to Eton to be married immediately. She agreed to this. Now, sir, her mother, who strongly opposes Anne's marriage to Slender and is determined that she will marry Doctor Caius, has ordered her to sneak away in the same way with Doctor Caius while everyone is distracted, and to go to the deanery where a priest will be waiting to marry them. Anne also agreed to her mother's plot and promised to marry the doctor. Now, here's how things stand. Her father's plan is that she'll be dressed all in white, so Slender will recognize her; when Slender sees an opportunity to take her hand, she'll go with him. Because they will all be wearing masks, her mother also planned a way for the doctor to recognize her: Anne will be elegantly dressed in loose green clothes with hanging ribbons flying around her head. And the doctor, when he spots a good opportunity, is supposed to pinch her hand, and Anne said she will leave with him when she gets that signal.

Which means she to deceive, father or mother?

Who is she intending to trick, her father or her mother?

Both, my good host, to go along with me: And here it rests, that you'll procure the vicar To stay for me at church 'twixt twelve and one, And, in the lawful name of marrying, To give our hearts united ceremony.

Both, my good host, so she can go with me. Here's the plan. You'll get the vicar to wait for me at the church between midnight and one o'clock so he can unite us in legal marriage.

Well, husband your device; I'll to the vicar:Bring you the maid, you shall not lack a priest.

Well, execute your plan carefully. I'll go to the vicar. You bring the woman, and I'll make sure you have a priest.

So shall I evermore be bound to thee;Besides, I'll make a present recompense.

I will be in your debt forever—and I will also give you a reward immediately.

FENTON and the HOST exit.

Join LitCharts A+ and get the entire Merry Wives Translation as a printable PDF. 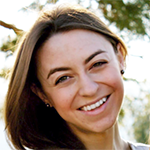 About the Translator: Maria Devlin

Maria Devlin received her Ph.D. in English Literature from Harvard University, where she specialized in Renaissance drama. She has worked as a bibliographical and editorial assistant for The Norton Anthology of English Literature and for The Norton Shakespeare. She is currently working with Stephen Greenblatt to design online courses on Shakespeare, including the modules "Hamlet's Ghost" and "Shylock's Bond" offered through HarvardX. She is writing a book on Renaissance comedy.

Maria Devlin wishes to credit the following sources, which she consulted extensively in composing her translations and annotations: