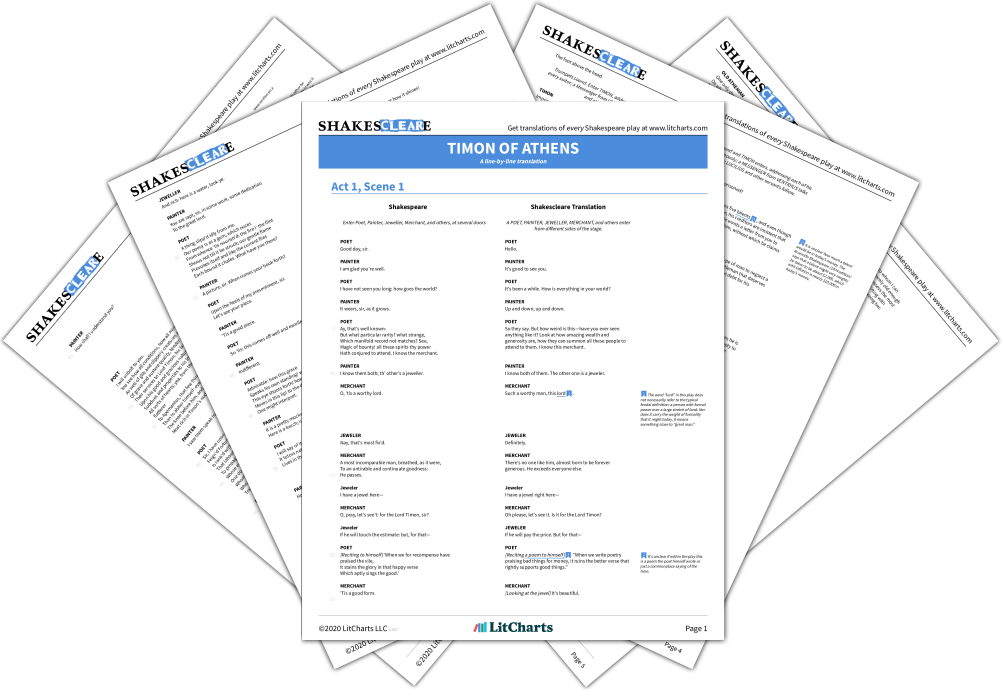 Download the entire Timon of Athens translation as a printable PDF!
Teachers and parents! Struggling with distance learning? Our Teacher Editions can help.

Enter SEMPRONIUS, and a Servant of TIMON's

Must he needs trouble me in 't,—hum!—'bove all others? He might have tried Lord Lucius or Lucullus; And now Ventidius is wealthy too, Whom he redeem'd from prison: all these Owe their estates unto him.

Should Timon really have to struggle for this? He could go to Lord Lucius or Lucullus for a loan, and he could also call on the rich Ventidius, who is free from prison thanks to Timon. All these men owe some of their wealth to Timon.

All those men must be under some wicked influence, because they all denied him.

How! have they denied him? Has Ventidius and Lucullus denied him? And does he send to me? Three? hum! It shows but little love or judgment in him: Must I be his last refuge! His friends, like physicians, Thrive, give him over: must I take the cure upon me? Has much disgraced me in't; I'm angry at him, That might have known my place: I see no sense for't, But his occasion might have woo'd me first; For, in my conscience, I was the first man That e'er received gift from him: And does he think so backwardly of me now, That I'll requite its last? No: So it may prove an argument of laughter To the rest, and 'mongst lords I be thought a fool. I'd rather than the worth of thrice the sum, Had sent to me first, but for my mind's sake; I'd such a courage to do him good. But now return, And with their faint reply this answer join; Who bates mine honour shall not know my coin.

No way! Ventidius and Lucullus denied him? Has he approached me for a loan? It shows little Timon's friends loved him that all three of these men refused him, and now I must be his last hope! All his friends benefitted from the charity that leaves him without money, and now leave him for broke like doctor does a case he has deemed helpless. Must I now try to cure him of his debts? What a disgrace and an unenviable position for me! I cannot understand why he did not come to me first—I was the first to receive a gift from him, after all. Does he think so poorly of me as to believe I would be the last to repay him? No, and that way I'll have reason to laugh at him and all the others, who have called me an idiot. If Timon had approached me first, I would have three times the amount he asks for. But now, servant, go back to him and tell him this: whoever scorns me this way will never get my money.

Excellent! Your lordship's a goodly villain. The devil knew not what he did when he made man politic; he crossed himself by 't: and I cannot think but, in the end, the villainies of man will set him clear. How fairly this lord strives to appear foul! takes virtuous copies to be wicked, like those that under hot ardent zeal would set whole realms on fire: Of such a nature is his politic love. This was my lord's best hope; now all are fled, Save only the gods: now his friends are dead, Doors, that were ne'er acquainted with their wards Many a bounteous year must be employ'd Now to guard sure their master. And this is all a liberal course allows; Who cannot keep his wealth must keep his house.

Wow, what a villain! Even the devil couldn't have known how evil men would be when he made them so crafty. He ruined himself in the process, and there's no way that all the badness in men will ever absolve him. It is incredible how this lord actually works to seem horrible! He makes himself seem virtuous, but only so he can be as wicked as those who would burn entire empires to the ground. That's what political desire is made of. He was Timon's best chance at getting money, and now all hopes are gone except for the will of the gods. Timon's friends are dead to him, and now all those doors he had left wide open all those years must be closed and used to protect him in his home. That's what being too generous gets you. He who cannot hang onto wealth must at least hang onto his house.