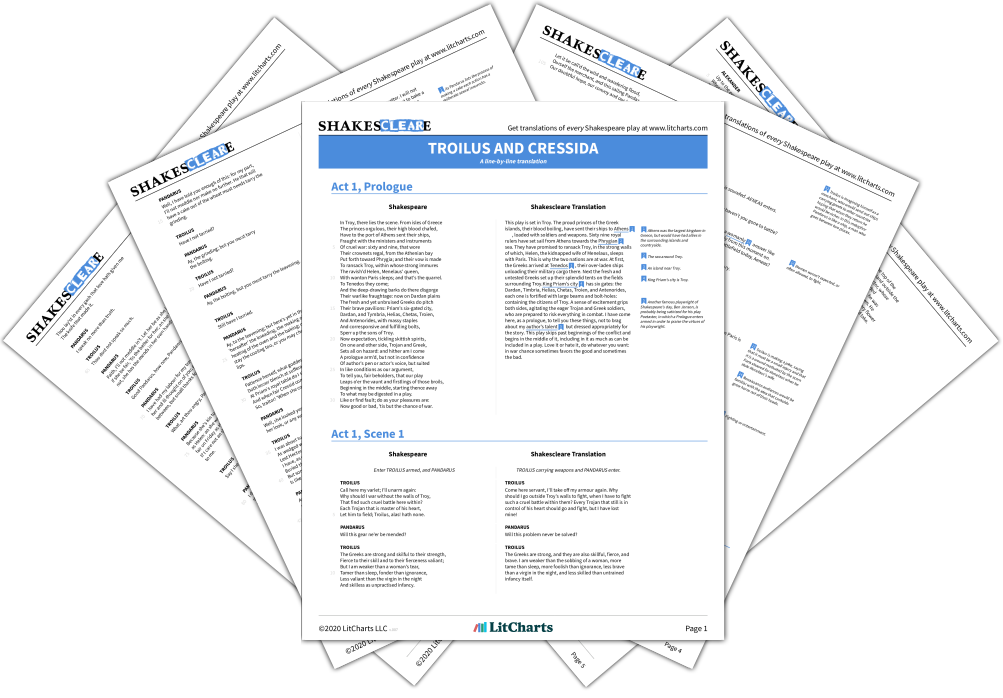 Download the entire Troilus and Cressida translation as a printable PDF!
Teachers and parents! Struggling with distance learning? Our Teacher Editions can help.

I'll heat his blood with Greekish wine to-night,Which with my scimitar I'll cool to-morrow.Patroclus, let us feast him to the height.

I'll heat Hector's blood with Greek wine tonight, and tomorrow I will cool it with my scimitar. Patroclus, lets entertain him well.

How now, thou core of envy!Thou crusty batch of nature, what's the news?

Hey there, you heart of envy! You ugly misfit, what's the news?

Why, thou picture of what thou seemest, and idolof idiot worshippers, here's a letter for thee.

That you are what you look like, an idol for people who worship idiots. Here's a letter for you.

Why, thou full dish of fool, from Troy.

You dish of fool, from Troy.

Who keeps the tent now?

Who is staying in their tent now?

The surgeon's box, or the patient's wound.

I'll laugh at his wounds.

Well said, adversity! and what need these tricks?

Very clever, always understanding the opposite of what I'm saying! Are your tricks useful?

Prithee, be silent, boy; I profit not by thy talk:thou art thought to be Achilles' male varlet.

Please, stop talking, boy. I don't gain anything from talking to you. You are thought to be Achilles's boy-lover.

Male varlet, you rogue! what's that?

Boy-lover, you rogue! What did you say?

Why, his masculine whore. Now, the rotten diseases of the south, the guts-griping, ruptures, catarrhs, loads o' gravel i' the back, lethargies, cold palsies, raw eyes, dirt-rotten livers, wheezing lungs, bladders full of imposthume, sciaticas, limekilns i' the palm, incurable bone-ache, and the rivelled fee-simple of the tetter, take and take again such preposterous discoveries!

Why thou damnable box of envy, thou, what meanestthou to curse thus?

Oh you evil, box of envy. What do you mean by cursing like this?

Do I curse thee?

Are these your names I have been cursing you with?

Why no, you ruinous butt, you whoresonindistinguishable cur, no.

No, you hateful arse, you son of a whore, you malformed wretch, no.

No! why art thou then exasperate, thou idle immaterial skein of sleave-silk, thou green sarcenet flap for a sore eye, thou tassel of a prodigal's purse, thou? Ah, how the poor world is pestered with such waterflies, diminutives of nature!

No? Then why are you so angry, you idle fabric decoration, you pampered eye-patch, you ornament, you? Ah the whole world is filled with leeches like you.

Get out, you blister!

My sweet Patroclus, I am thwarted quite From my great purpose in to-morrow's battle. Here is a letter from Queen Hecuba, A token from her daughter, my fair love, Both taxing me and gaging me to keep An oath that I have sworn. I will not break it: Fall Greeks; fail fame; honour or go or stay; My major vow lies here, this I'll obey. Come, come, Thersites, help to trim my tent: This night in banqueting must all be spent. Away, Patroclus!

My sweet Patroclus, I can't carry on with my plan to go to battle tomorrow. This is a letter from Queen Hecuba, and has a message from her daughter, whom I love, which is making me promise not to break an oath I have sworn. I can't break my oath even if it means the Greeks losing or my losing my fame. The only vow I care about is this, and I'll obey it. Come, come, Thersites, tidy up my tent, we will spend this night banqueting. Let's go Patroclus!

With too much blood and too little brain, these two may run mad; but, if with too much brain and too little blood they do, I'll be a curer of madmen. Here's Agamemnon, an honest fellow enough and one that loves quails; but he has not so much brain as earwax: and the goodly transformation of Jupiter there, his brother, the bull,—the primitive statue, and oblique memorial of cuckolds; a thrifty shoeing-horn in a chain, hanging at his brother's leg,— to what form but that he is, should wit larded with malice and malice forced with wit turn him to? To an ass, were nothing; he is both ass and ox: to an ox, were nothing; he is both ox and ass. To be a dog, a mule, a cat, a fitchew, a toad, a lizard, an owl, a puttock, or a herring without a roe, I would not care; but to be Menelaus, I would conspire against destiny. Ask me not, what I would be, if I were not Thersites; for I care not to be the louse of a lazar, so I were not Menelaus! Hey-day! spirits and fires!

With too much passion and too little brain, these two will go mad. But if they do go mad with too much thinking and too little courage, I will be considered a curer of madmen. Here comes Agamemnon, an honest man and one that loves eating quails. But he doesn't have as much brain as he does earwax. And the walking embodiment of Jupiter stood next to him, his bull-like brother, the original model and monument to all cuckolds, is a coward, like a tool hanging from his brother's belt... What worse shape could an angry god make you into? If he were turned into an ass or an ox that would be fine, because he is already both. If were turned into a dog, a mule, a cat, a polecat, a toad, a lizard, an owl, a hawk, or a worthless fish, I wouldn't care, but I would do anything to avoid being turned into Menelaus. Don't ask me what I would be if I wasn't myself, because I would be perfectly happy as a louse or a leper, anything but Menelaus! Look at that, they are caring torches!

No, yonder 'tis;There, where we see the lights.

No it is this way, there, where the light is.

I've asked too much of you.

Here comes himself to guide you.

Here he comes to show us the way.

So now, fair prince of Troy, I bid good night.Ajax commands the guard to tend on you.

Well, now I will say goodnight, fair prince of Troy. Ajax will tell the guard to look after you.

Thanks and good night to the Greeks' general.

Thanks and goodnight, Greek general.

Good night and welcome, both at once, to thoseThat go or tarry.

Goodnight or welcome, if you are coming or going.

Old Nestor tarries; and you too, Diomed,Keep Hector company an hour or two.

Old Nestor is staying here, and you too, Diomedes, come in and keep Hector company with me.

I can't, lord, I have important business that must be seen to at once. Goodnight, great Hector.

Give me your hand.

Give me your hand.

[Aside to TROILUS] Follow his torch; he goes toCalchas' tent:I'll keep you company.

Aside to TROILUS] Follow his torch, he's going to Calchas's tent: I'll come with you.

Sweet sir, you honour me.

[Aside to ULYSSES] Sweet sir, you honour me.

And so, good night.

And so, good night.

Come this way, enter my tent.

That same Diomed's a false-hearted rogue, a most unjust knave; I will no more trust him when he leers than I will a serpent when he hisses: he will spend his mouth, and promise, like Brabbler the hound: but when he performs, astronomers foretell it; it is prodigious, there will come some change; the sun borrows of the moon, when Diomed keeps his word. I will rather leave to see Hector, than not to dog him: they say he keeps a Trojan drab, and uses the traitor Calchas' tent: I'll after. Nothing but lechery! all incontinent varlets!

That Diomedes is a false-hearted rogue, and an unjust fool. I don't trust him when he looks at me anymore than I do when a snake hisses at me. He is always promising so much and never delivers, like a hound running away from the scent. If he is ever actually honest astronomers see it as a sign from the gods, it is such a rare event: the sun will take its light from the moon before Diomede keeps his word. I'll leave Hector rather than stop following him. Apparently he has a Trojan mistress, and keeps her in Calchas's tent, I'll follow them. I'll have nothing but lechery and easy women!