Download this LitChart! (PDF)
Teachers and parents! Struggling with distance learning? Our Teacher Edition on They Called Us Enemy can help.

Welcome to the LitCharts study guide on George Takei's They Called Us Enemy. Created by the original team behind SparkNotes, LitCharts are the world's best literature guides.

They Called Us Enemy: Introduction

A concise biography of George Takei plus historical and literary context for They Called Us Enemy.

They Called Us Enemy: Plot Summary

A quick-reference summary: They Called Us Enemy on a single page.

In-depth summary and analysis of every book of They Called Us Enemy. Visual theme-tracking, too.

They Called Us Enemy: Themes

Explanations, analysis, and visualizations of They Called Us Enemy's themes.

They Called Us Enemy: Quotes

They Called Us Enemy's important quotes, sortable by theme, character, or book.

They Called Us Enemy: Characters

Description, analysis, and timelines for They Called Us Enemy's characters.

Description, analysis, and timelines for They Called Us Enemy's terms.

They Called Us Enemy: Symbols

Explanations of They Called Us Enemy's symbols, and tracking of where they appear.

They Called Us Enemy: Theme Wheel

An interactive data visualization of They Called Us Enemy's plot and themes.

George Takei was born in Los Angeles in 1937, and he was the oldest living child of three children. In the months after the Japanese bombed Pearl Harbor in 1941, when Takei was five years old, he and his family were incarcerated—alongside many other Japanese Americans—in internment camps, meant to protect national security by sequestering Japanese Americans in secure locations away from the general public. Following their release in 1946, the Takei family returned to Los Angeles, where Takei’s father returned to the dry cleaning business and eventually became a very successful real estate agent. Takei studied acting at UCLA and, after a number of smaller stage and television roles, was cast in the role of Officer Sulu in Star Trek. This role would catapult Takei to fame. In addition to acting, Takei has been a vocal activist for much of his adult life. He’s been especially supportive of LGBT rights for decades. Though Takei didn’t publically come out until 2005, his sexuality has been something of an open secret since the 1970s. He married his long-time partner, Brad Altman, in 2008. In addition to founding the Japanese American History Museum and speaking out about his experience in internment camps during World War II, Takei has also criticized moves to place restrictions on any ethnic or racial group, particularly Muslims.
Get the entire They Called Us Enemy LitChart as a printable PDF.
"My students can't get enough of your charts and their results have gone through the roof." -Graham S.
Download 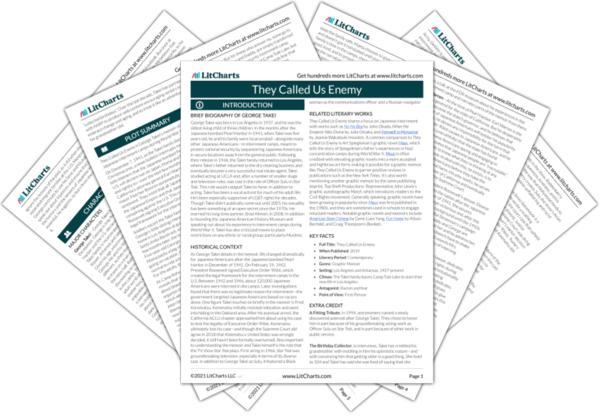 Historical Context of They Called Us Enemy

As George Takei details in the memoir, life changed dramatically for Japanese Americans after the Japanese bombed Pearl Harbor in December of 1941. On February 19, 1942, President Roosevelt signed Executive Order 9066, which created the legal framework for the internment camps in the U.S. Between 1942 and 1946, about 120,000 Japanese Americans were interned in the camps. Later investigations found that there was no legitimate reason for internment—the government targeted Japanese Americans based on racism alone. One figure Takei touches on briefly in the memoir is Fred Korematsu. Korematsu initially resisted relocation and went into hiding in the Oakland area. After his eventual arrest, the California ACLU chapter approached him about using his case to test the legality of Executive Order 9066. Korematsu ultimately lost his case—and though the Supreme Court did agree in 2018 that Korematsu v. United States was wrongly decided, it still hasn’t been formally overturned. Also important to understanding the memoir and Takei himself is the role that the TV show Star Trek plays. First airing in 1966, Star Trek was groundbreaking television, especially in terms of its diverse cast. In addition to George Takei as Sulu, it featured a Black woman as the communications officer and a Russian navigator.

Other Books Related to They Called Us Enemy

They Called Us Enemy shares a focus on Japanese internment with works such as No-No Boy by John Okada, When the Emperor Was Divine by Julie Otsaka, and Farewell to Manzanar by Jeanne Wakatsuki Houston. A common comparison to They Called Us Enemy is Art Spiegleman’s graphic novel Maus, which tells the story of Spiegelman’s father’s experiences in Nazi concentration camps during World War II. Maus is often credited with elevating graphic novels into a more accepted and highbrow art form, making it possible for a graphic memoir like They Called Us Enemy to garner positive reviews in publications such as the New York Times. It’s also worth mentioning another graphic memoir by the same publishing imprint, Top Shelf Productions: Representative John Lewis’s graphic autobiography March, which introduces readers to the Civil Rights movement. Generally speaking, graphic novels have been growing in popularity since Maus was first published in the 1980s, and they are sometimes used in schools to engage reluctant readers. Notable graphic novels and memoirs include American Born Chinese by Gene Luen Yang, Fun Home by Alison Bechdel, and Craig Thompson’s Blankets.
Key Facts about They Called Us Enemy

Extra Credit for They Called Us Enemy

A Fitting Tribute. In 1994, astronomers named a newly discovered asteroid after George Takei. They chose to honor him in part because of his groundbreaking acting work as Officer Sulu on Star Trek, and in part because of other work in public service.

The Birthday Collector. In interviews, Takei has credited his grandmother with instilling in him his optimistic nature—and with convincing him that getting older is a good thing. She lived to 104 and Takei has said she was fond of saying that she “collected birthdays.” Over the last decade, Takei has partnered with AARP to produce web content encouraging seniors to embrace change and aging, and to treat it like an adventure as his grandmother did. 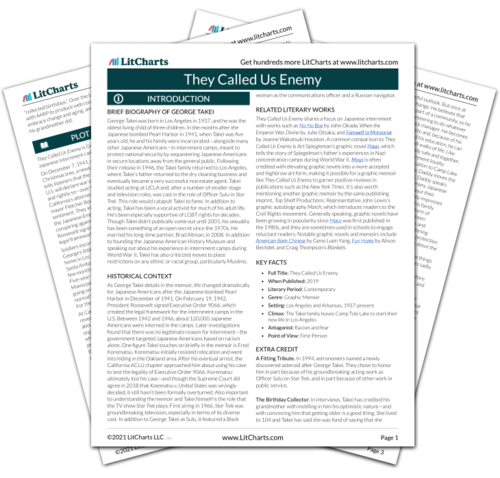 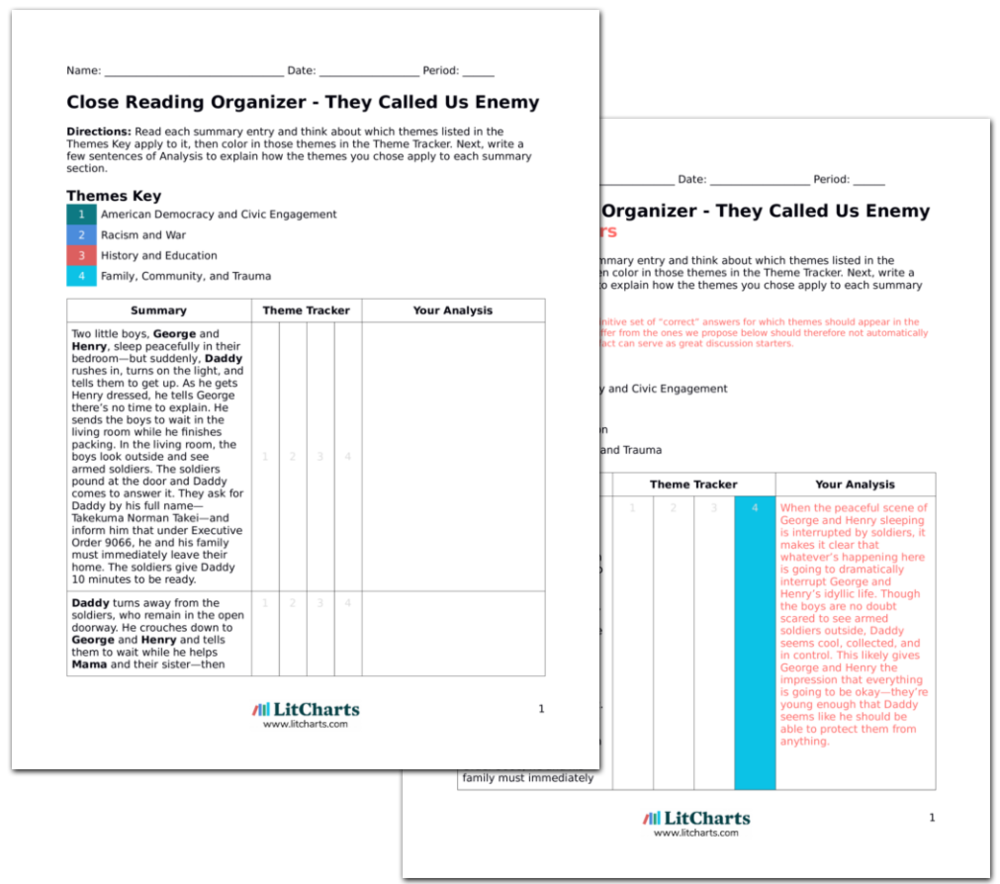