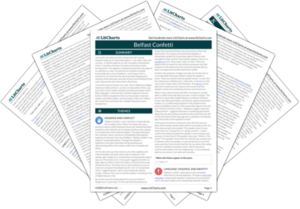 "Belfast Confetti" was written by the Irish poet Ciaran Carson and published in the collection The Irish for No in 1987. In the poem, an unnamed speaker appears to be caught up in a bomb blast and tries to escape. The poem then explores the relationship between violence and language itself, as the disoriented speaker searches for an escape route. According to Carson, the poem is set in August 1969 during the Troubles, a violent conflict that took place in Northern Ireland during the late 20th century. 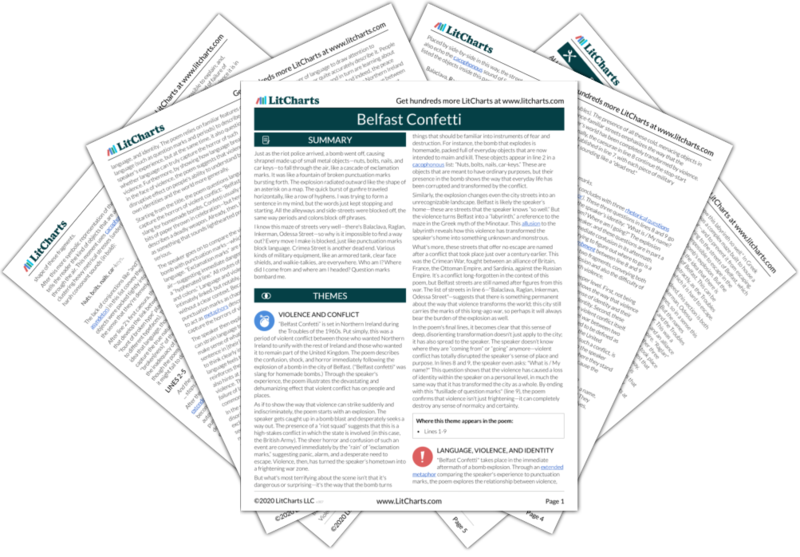 Get the entire guide to “Belfast Confetti” as a printable PDF.
Download it!

The Full Text of “Belfast Confetti”

The Full Text of “Belfast Confetti”

1Suddenly as the riot squad moved in, it was raining exclamation marks,

2Nuts, bolts, nails, car-keys. A fount of broken type. And the explosion

3Itself—an asterisk on the map. This hyphenated line, a burst of rapid fire…

4I was trying to complete a sentence in my head, but it kept stuttering.

5All the alleyways and side-streets blocked with stops and colons.

6I know this labyrinth so well—Balaclava, Raglan, Inkerman, Odessa Street—

7Why can’t I escape? Every move is punctuated. Crimea Street. Dead end again.

8A Saracen, Kremlin-2 mesh. Makrolon face-shields. Walkie-talkies. What is