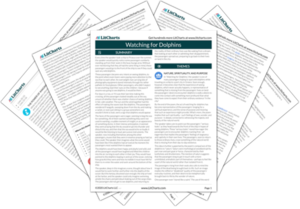 "Watching for Dolphins" is a poem by contemporary English poet David Constantine, published in his 1983 collection of the same name. The poem details the experience of a group of passengers watching for wild dolphins aboard a ship bound for Piraeus, Greece. Constantine uses this premise to explore themes of isolation and connection, the role of imagination in ordinary life, and the desire for intense, meaningful encounters with the natural world. The passengers' desire to see dolphins eventually comes to symbolize their longing for spiritual epiphany, connectedness, and a sense of profound, communal purpose. 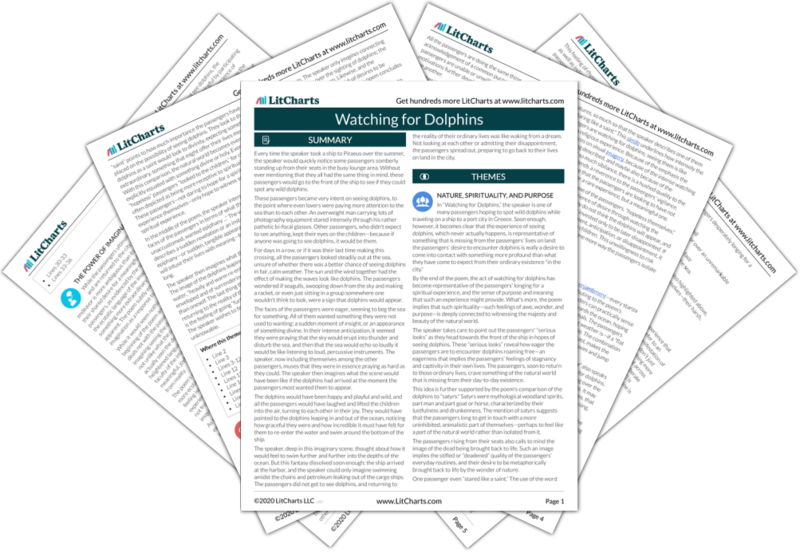 Get the entire guide to “Watching for Dolphins” as a printable PDF.
Download

The Full Text of “Watching for Dolphins”

The Full Text of “Watching for Dolphins”

1In the summer months on every crossing to Piraeus

3From seats in the packed saloon and with serious

4Looks and no acknowledgement of a common purpose

5Passed forward through the small door into the bows

6To watch for dolphins. One saw them lose

7Every other wish. Even the lovers

8Turned their desires on the sea, and a fat man

9Hung with equipment to photograph the occasion

11Hopeless themselves, looked to the children for they

12Would see dolphins if anyone would. Day after day

13Or on their last opportunity all gazed

14Undecided whether a flat calm were favourable

15Or a sea the sun and the wind between them raised

16To a likeness of dolphins. Were gulls a sign, that fell

17Screeching from the sky or over an unremarkable place

18Sat in a silent school? Every face

19After its character implored the sea.

21Praying the sky would clang and the abused Aegean

22Reverberate with cymbal, gong and drum.

23We could not imagine more prayer, and had they then

24On the waves, on the climax of our longing come

26We should have laughed and lifted the children up

27Stranger to stranger, pointing how with a leap

28They left their element, three or four times, centred

29On grace, and heavily and warm re-entered,

30Looping the keel. We should have felt them go

31Further and further into the deep parts. But soon

32We were among the great tankers, under their chains

33In black water. We had not seen the dolphins

34But woke, blinking. Eyes cast down

35With no admission of disappointment the company

36Dispersed and prepared to land in the city.