The Bright Lights of Sarajevo Summary & Analysis
by Tony Harrison

The Bright Lights of Sarajevo Summary & Analysis
by Tony Harrison 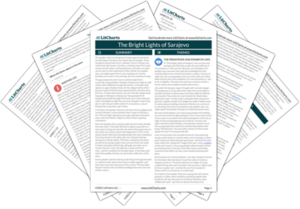 The English poet Tony Harrison wrote "The Bright Lights of Sarajevo" when on assignment for the Guardian newspaper during the bloody Bosnian War. "The Bright Lights of Sarajevo" observes the Sarajevans' determination to go on living despite their horrific circumstances, and particularly focuses on the nighttime courtship of young men and women. Love and life, this poem suggests, somehow manage to persist even in the most terrible times. The poem first appeared in the Guardian in 1995. 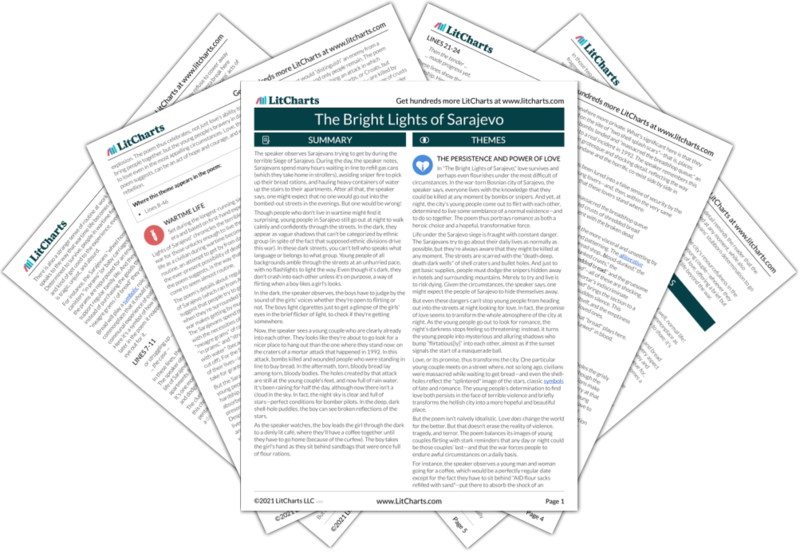 Get the entire guide to “The Bright Lights of Sarajevo” as a printable PDF.
Download

The Full Text of “The Bright Lights of Sarajevo”

The Full Text of “The Bright Lights of Sarajevo”

1After the hours that Sarajevans pass

2queuing with empty canisters of gas

3to get the refills they wheel home in prams,

4or queuing for the precious meagre grams

5of bread they’re rationed to each day,

6and often dodging snipers on the way,

7or struggling up sometimes eleven flights

8of stairs with water, then you’d think that the nights

9of Sarajevo would be totally devoid

11but tonight in Sarajevo that’s just not the case —

12The young go walking at a stroller's pace,

14as Muslim, Serb or Croat in such dark.

15In unlit streets you can’t distinguish who

16calls bread hjleb or hleb or calls it kruh.

17All take the evening air with a stroller's stride,

18no torches guide them, but they don’t collide

19except as one of the flirtatious ploys

20when a girl’s dark shape is fancied by some boy’s.

21Then the tender radar of the tone of voice

22shows by its signals she approves his choice.

23Then match or lighter to a cigarette

24to check in her eyes if he’s made progress yet.

25And I see a pair who’ve certainly progressed

26beyond the tone of voice and Match-flare test

28and lead her away from where they stand

31and blood-dunked crusts of shredded bread

32lay on this pavement with the broken dead.

33And at their feet in holes made by the mortar

34that caused the massacre, now full of water

35from the rain that’s poured down half the day,

36though now even the smallest clouds have cleared away,

40fragments of the splintered Pleiades,

42splashed on the pavement by Serb mortar shells.

45until the curfew, and he holds her hand