Download this LitChart! (PDF)
Teachers and parents! Struggling with distance learning? Our Teacher Edition on 55 Miles to the Gas Pump can help.

Welcome to the LitCharts study guide on Annie Proulx's 55 Miles to the Gas Pump. Created by the original team behind SparkNotes, LitCharts are the world's best literature guides.

55 Miles to the Gas Pump: Introduction

A concise biography of Annie Proulx plus historical and literary context for 55 Miles to the Gas Pump.

A quick-reference summary: 55 Miles to the Gas Pump on a single page.

In-depth summary and analysis of every of 55 Miles to the Gas Pump. Visual theme-tracking, too.

55 Miles to the Gas Pump: Themes

Explanations, analysis, and visualizations of 55 Miles to the Gas Pump's themes.

55 Miles to the Gas Pump: Quotes

55 Miles to the Gas Pump's important quotes, sortable by theme, character, or .

55 Miles to the Gas Pump: Characters

Description, analysis, and timelines for 55 Miles to the Gas Pump's characters.

55 Miles to the Gas Pump: Symbols

Explanations of 55 Miles to the Gas Pump's symbols, and tracking of where they appear.

An interactive data visualization of 55 Miles to the Gas Pump's plot and themes.

Born in 1935 to the vice president of a textile company and a painter, Annie Proulx grew up in Connecticut with four younger sisters and briefly attended Maine’s Colby College before leaving school to work odd jobs. Proulx published her first short story, “The Customs Lounge,” in 1963 and graduated from the University of Vermont in 1969. She completed a Master’s degree at Sir George Williams (Concordia) University and began a Ph.D., but abandoned it in 1975, the same year her third marriage ended, and moved back to Vermont with her three sons. While working as a freelance journalist, she published several instructional books as well as a short-lived newspaper and more short stories. In 1988, she published her first collection of short fiction, Heart Songs and Other Stories, and in 1992 her first novel, Postcards, at the age of 56. Her first book to garner widespread recognition was The Shipping News (1993), which won the PEN/Faulkner Award, the Pulitzer Prize for Fiction, and the National Book Award. She moved to Saratoga, Wyoming in 1994, which became the setting for her next three collections of short fiction. Since then, she has published two collections of short fiction, three novels, and a memoir about her Wyoming ranch, Bird Cloud. She moved to Port Townsend, Washington after selling her ranch in 2014 and published her most recent book, Barkskins, two years later.
Get the entire 55 Miles to the Gas Pump LitChart as a printable PDF.
"My students can't get enough of your charts and their results have gone through the roof." -Graham S.
Download 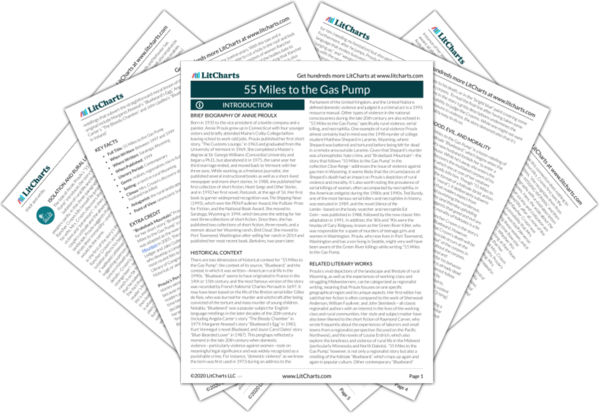 Historical Context of 55 Miles to the Gas Pump

There are two dimensions of historical context for “55 Miles to the Gas Pump”: the context of its source, “Bluebeard,” and the context in which it was written—American rural life in the 1990s. “Bluebeard” seems to have originated in France in the 14th or 15th century, and the most famous version of the story was recorded by French folklorist Charles Perrault in 1697. It may have been based on the life of the Breton serial killer Gilles de Rais, who was burned for murder and witchcraft after being convicted of the torture and mass murder of young children. Notably, “Bluebeard” was a popular subject for English-language retellings in the later decades of the 20th century (including Angela Carter’s story “The Bloody Chamber” in 1979, Margaret Atwood’s story “Bluebeard’s Egg” in 1983, Kurt Vonnegut’s novel Bluebeard, and Joyce Carol Oates’ story “Blue-Bearded Lover” in 1987). This perghaps reflected a moment in the late 20th century when domestic violence—particularly violence against women—took on meaningful legal significance and was widely recognized as a punishable crime. For instance, “domestic violence” as we know the term was first used in 1973 during an address to the Parliament of the United Kingdom, and the United Nations defined domestic violence and judged it a criminal act in a 1993 resource manual. Other types of violence in the national consciousness during the late 20th century are also echoed in “55 Miles to the Gas Pump,” specifically rural violence, serial killing, and necrophilia. One example of rural violence Proulx almost certainly had in mind was the 1998 murder of college student Matthew Shepard in Laramie, Wyoming, where Shepard was battered and tortured before being left for dead in a remote area outside Laramie. Given that Shepard’s murder was a homophobic hate crime, and “Brokeback Mountain”—the story that follows “55 Miles to the Gas Pump” in the collection Close Range—addresses the issue of violence against gay men in Wyoming, it seems likely that the circumstances of Shepard’s death had an impact on Proulx’s depiction of rural violence and morality. It’s also worth noting the prevalence of serial killings of women, often accompanied by necrophilia, in the American zeitgeist during the 1980s and 1990s. Ted Bundy, one of the most famous serial killers and necrophiles in history, was executed in 1989, and the novel Silence of the Lambs—based on the body-snatcher and necrophile Ed Gein—was published in 1988, followed by the now-classic film adaptation in 1991. In addition, the ‘80s and ‘90s were the heyday of Gary Ridgway, known as the Green River Killer, who was responsible for a spate of murders of teenage girls and women in Washington. Proulx, who now lives in Port Townsend, Washington and has a son living in Seattle, might very well have been aware of the Green River killings while writing “55 Miles to the Gas Pump.

Other Books Related to 55 Miles to the Gas Pump

Proulx’s vivid depictions of the landscape and lifestyle of rural Wyoming, as well as the experiences of working-class and struggling Midwesterners, can be categorized as regionalist writing, meaning that Proulx focuses on one specific geographical region and its unique aspects. Her first editor has said that her fiction is often compared to the work of Sherwood Anderson, William Faulkner, and John Steinbeck—all classic regionalist authors with an interest in the lives of the working class and rural communities. Her style and subject matter have also been likened to the short fiction of Raymond Carver, who wrote frequently about the experiences of laborers and small towns from a regionalist perspective (focused on the Pacific Northwest), and the novels of Louise Erdrich, which also explore the loneliness and violence of rural life in the Midwest (particularly Minnesota and North Dakota). “55 Miles to the Gas Pump,” however, is not only a regionalist story but also a retelling of the folktale “Bluebeard,” which crops up again and again in popular culture. Other contemporary “Bluebeard” retellings that subvert the straightforward moral lesson of the original include Margaret Atwood’s “Bluebeard’s Egg,” Angela Carter’s “The Bloody Chamber,” and John Updike’s “Bluebeard in Ireland.”
Key Facts about 55 Miles to the Gas Pump

Extra Credit for 55 Miles to the Gas Pump

“Brokeback Mountain.” Proulx is probably most well known for her short story “Brokeback Mountain,” which follows “55 Miles to the Gas Pump” in Close Range: Wyoming Stories, and was adapted as the now-classic Ang Lee film Brokeback Mountain in 2005. The movie adaptation, starring Heath Ledger and Jake Gyllenhaal as two cowboys in rural Wyoming who develop a complex emotional and sexual relationship, is the most recent film to have been chosen for inclusion in the Library of Congress’ National Film Registry for its “cultural, historical, or aesthetic significance.”

Proulx’s Pen Name. Proulx has said in interviews that her first stories were published under the pen name “E.A. Proulx” because magazine editors didn’t want to make their male readers aware that the author was a woman. However, by the time her first novel, Postcards, was published in 1992, she had decided to go by the pen name E. Annie Proulx, establishing herself as a successful woman writer. She has added that “finally [she] got sick of writing E,” and has written since Close Range in 1999 simply as Annie Proulx. 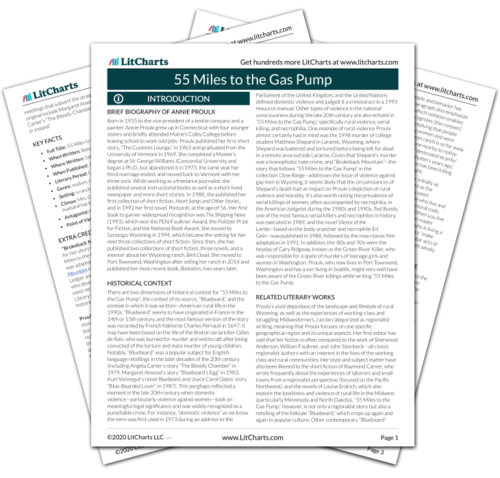 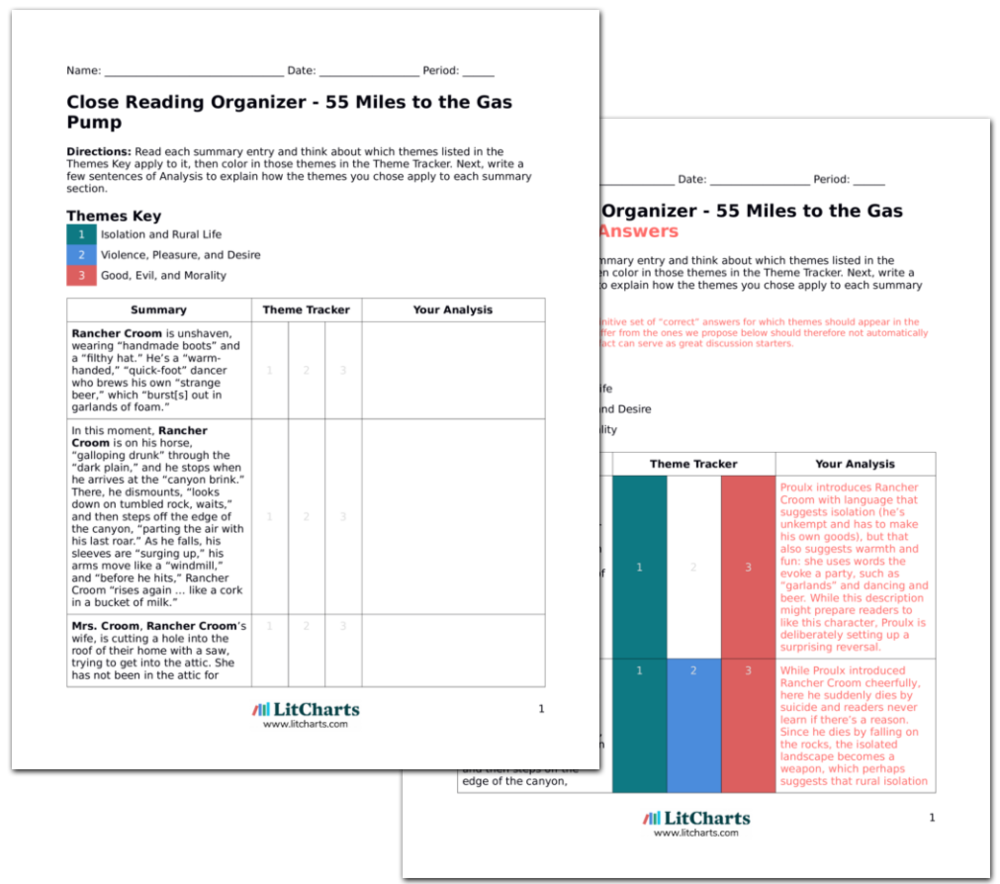