Download this LitChart! (PDF)
Teachers and parents! Struggling with distance learning? Our Teacher Edition on A Grain of Wheat can help.

Welcome to the LitCharts study guide on Ngugi wa Thiong’o's A Grain of Wheat. Created by the original team behind SparkNotes, LitCharts are the world's best literature guides.

A Grain of Wheat: Introduction

A concise biography of Ngugi wa Thiong’o plus historical and literary context for A Grain of Wheat.

A Grain of Wheat: Plot Summary

A quick-reference summary: A Grain of Wheat on a single page.

In-depth summary and analysis of every chapter of A Grain of Wheat. Visual theme-tracking, too.

A Grain of Wheat: Themes

Explanations, analysis, and visualizations of A Grain of Wheat's themes.

A Grain of Wheat: Quotes

A Grain of Wheat's important quotes, sortable by theme, character, or chapter.

A Grain of Wheat: Characters

Description, analysis, and timelines for A Grain of Wheat's characters.

Description, analysis, and timelines for A Grain of Wheat's terms.

A Grain of Wheat: Symbols

Explanations of A Grain of Wheat's symbols, and tracking of where they appear.

A Grain of Wheat: Theme Wheel

An interactive data visualization of A Grain of Wheat's plot and themes.

Ngũgĩ Wa Thiong’o was born and baptized James Ngugi in British-controlled Kenya in 1938. Ngũgĩ and his family were members of the Gikuyu (or Kikuyu; or Agikuyu), the largest ethnic group in Kenya. Even from his early childhood, Ngũgĩ’s life was framed by the Kenyan struggle against the British. His family was heavily involved in the Mau Mau freedom fighting movement—one of his brothers was a freedom fighter, the homeguard tortured his mother, and Ngũgĩ’s deaf brother was shot in the back by a British soldier. Ngũgĩ began writing very early and at the age of 24 premiered a play he had written for the African Writers Conference. His first novel, Weep Not, Child, was published in 1964, the first English-language novel to be published by an East African writer. After completing a B.A. in English at Makerere University around the same time, Ngũgĩ traveled to England to work on an M.A. at Leeds, but he did not complete his studies since his energy was instead devoted to the writing of A Grain of Wheat, which was published in 1967. A Grain of Wheat marked a turning point for Ngũgĩ, after which he became a Fanonist Marxist, rejected Christianity, began writing only in Gikuyu (and then translating his stories into English), and legally changed his name to Ngũgĩ Wa Thiong’o, rejecting James Ngugi as a “missionary construction.” Ngũgĩ abandoned his M.A. and returned to Kenya, taking a position as a literature professor at the University of Nairobi. During this time, Ngũgĩ’s writing became more brazenly political, criticizing Kenya’s newly independent government and earning the ire of Jomo Kenyatta, a man whom Ngũgĩ had praised in A Grain of Wheat. In 1977, Ngũgĩ was imprisoned by Jomo Kenyatta’s successor. In prison, Ngũgĩ wrote his first entirely Gikuyu novel, The Devil on the Cross (translation), on prison toilet paper. Following his release, Ngũgĩ and his family were exiled from Kenya. He continued to write—publishing books and essays as late as 2012—and teach as a visiting professor at several universities around Europe and America, including Yale, Bayreuth University in Germany, and New York University. Ngũgĩ revisited East Africa in 2004, but never moved back to his home country.
Get the entire A Grain of Wheat LitChart as a printable PDF.
"My students can't get enough of your charts and their results have gone through the roof." -Graham S.
Download 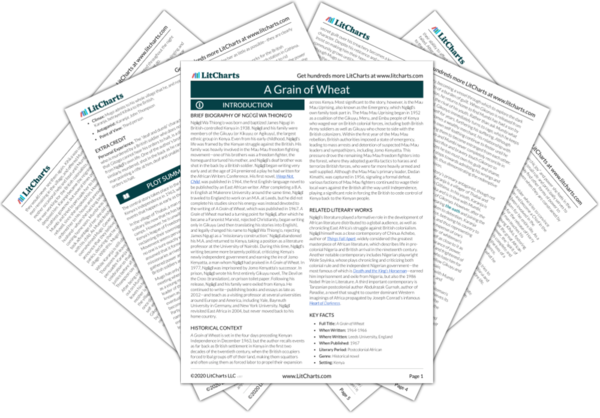 Historical Context of A Grain of Wheat

A Grain of Wheat is set in the four days preceding Kenyan Independence in December 1963, but the author recalls events as far back as British settlement in Kenya in the first two decades of the twentieth century, when the British occupiers forced tribal groups off of their land, making them squatters and often using them as forced labor to propel their expansion across Kenya. Most significant to the story, however, is the Mau Mau Uprising, also known as the Emergency, which Ngũgĩ’s own family took part in. The Mau Mau Uprising began in 1952 as a coalition of the Gikuyu, Meru, and Embu people of Kenya who waged war on British colonial forces, including both British Army soldiers as well as Gikuyu who chose to side with the British colonizers. Within the first year of the Mau Mau rebellion, British authorities imposed a state of emergency, leading to mass arrests and detention of suspected Mau Mau leaders and sympathizers, including Jomo Kenyatta. This pressure drove the remaining Mau Mau freedom fighters into the forest, where they adopted guerilla tactics to harass and terrorize British forces, who were far more heavily armed and well supplied. Although the Mau Mau’s primary leader, Dedan Kimathi, was captured in 1956, signaling a formal defeat, various factions of Mau Mau fighters continued to wage their local wars against the British all the way until Independence, playing a significant role in forcing the British to cede control of Kenya back to the Kenyan people.

Other Books Related to A Grain of Wheat

Ngũgĩ’s literature played a formative role in the development of African literature distributed to a global audience, as well as chronicling East Africa’s struggle against British colonialism. Ngũgĩ himself was a close contemporary of Chinua Achebe, author of Things Fall Apart, widely considered the greatest masterpiece of African literature, which describes life in pre-colonial Nigeria and British arrival in the nineteenth century. Another notable contemporary includes Nigerian playwright Wole Soyinka, whose plays chronicling and criticizing both colonial rule and the independent Nigerian government—the most famous of which is Death and the King’s Horseman—earned him imprisonment and exile from Nigeria, but also the 1986 Nobel Prize in Literature. A third important contemporary is Tanzanian postcolonial author Abdulrazak Gurnah, author of Paradise, a novel that sought to counter dominant Western imaginings of Africa propagated by Joseph Conrad’s infamous Heart of Darkness.
Key Facts about A Grain of Wheat

Extra Credit for A Grain of Wheat

Personal Experience. The “deaf and dumb” character Gitogo, who is murdered by a British soldier who does not understand that Gitogo cannot hear his orders to halt, is a direct excerpt from Ngũgĩ’s own life. One of the author’s brothers was similarly murdered, shot in the back as he ran from a British man pointing a rifle at him, deaf and unable to hear the man’s orders to halt. 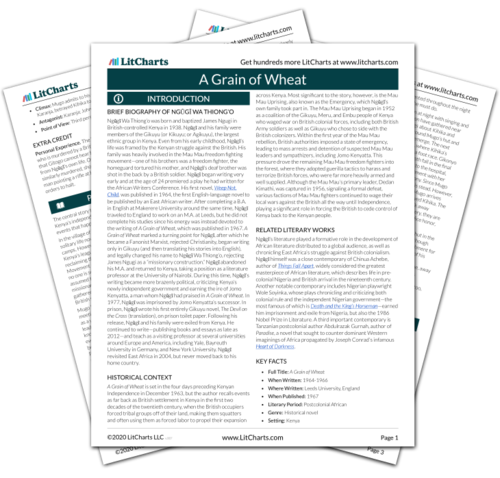 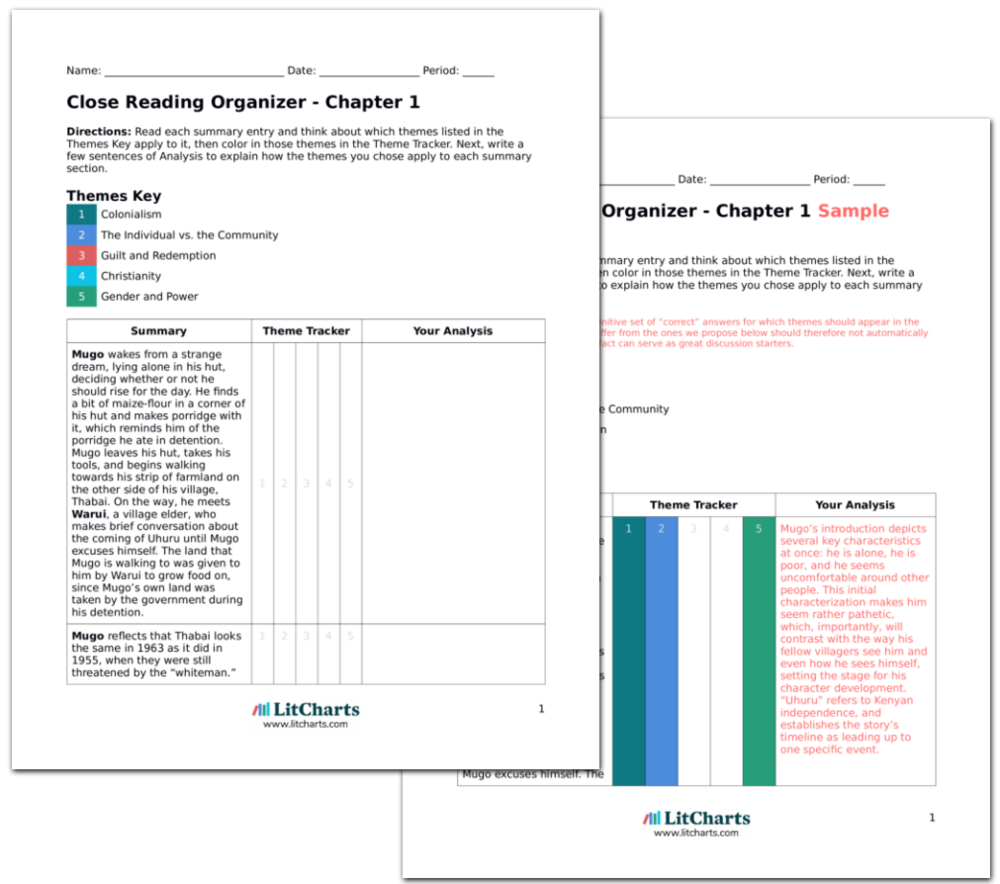