Download this LitChart! (PDF)
Teachers and parents! Struggling with distance learning? Our Teacher Edition on Ain’t I a Woman? can help.

Welcome to the LitCharts study guide on Sojourner Truth's Ain’t I a Woman?. Created by the original team behind SparkNotes, LitCharts are the world's best literature guides.

Ain’t I a Woman?: Introduction

A concise biography of Sojourner Truth plus historical and literary context for Ain’t I a Woman?.

Ain’t I a Woman?: Plot Summary

A quick-reference summary: Ain’t I a Woman? on a single page.

In-depth summary and analysis of every of Ain’t I a Woman?. Visual theme-tracking, too.

Ain’t I a Woman?: Themes

Explanations, analysis, and visualizations of Ain’t I a Woman?'s themes.

Ain’t I a Woman?: Quotes

Ain’t I a Woman?'s important quotes, sortable by theme, character, or .

Ain’t I a Woman?: Characters

Description, analysis, and timelines for Ain’t I a Woman?'s characters.

Description, analysis, and timelines for Ain’t I a Woman?'s terms.

Ain’t I a Woman?: Symbols

Explanations of Ain’t I a Woman?'s symbols, and tracking of where they appear.

Ain’t I a Woman?: Theme Wheel

An interactive data visualization of Ain’t I a Woman?'s plot and themes.

Sojourner Truth was born into slavery in 1797 as Isabella Baumfree (sometimes spelled “Bomfree”). She was raised in a Dutch-speaking town in Ulster County, New York, and she had the first of her five children (not 13, as some sources claim), in 1815. In 1827, she and her infant daughter fled slavery and took shelter with an abolitionist family who lived nearby. The family bought Truth and two of her children out of slavery. Truth moved to New York City, where she became devoutly religious and renamed herself Sojourner Truth, claiming that the Holy Spirit had encouraged her to always preach the truth. But as Truth began speaking at increasingly prominent venues around the United States on behalf of the abolitionist and women’s rights movements, she found herself disappointed by the rhetoric of abolitionists like Frederick Douglass, who believed Black men should receive the right to vote before Black women, and many religious authorities of her era. In the 1850s, Truth moved to Michigan, where three of her daughters were living. She remained active in the intertwined fights for abolition and suffrage for all. A prolific speaker, many of Truth’s landmark speeches (most notably “Ain’t I a Woman?”) have been rewritten and, in many historians’ views, corrupted through said rewrites, over time. Nevertheless, Sojourner Truth remains an enduring icon of the abolitionist movement as well as the first wave of feminism in the U.S. Many monuments and buildings across the United States—most notably in Michigan, Ohio, and New York—have been erected and named in her honor.
Get the entire Ain’t I a Woman? LitChart as a printable PDF.
"My students can't get enough of your charts and their results have gone through the roof." -Graham S.
Download 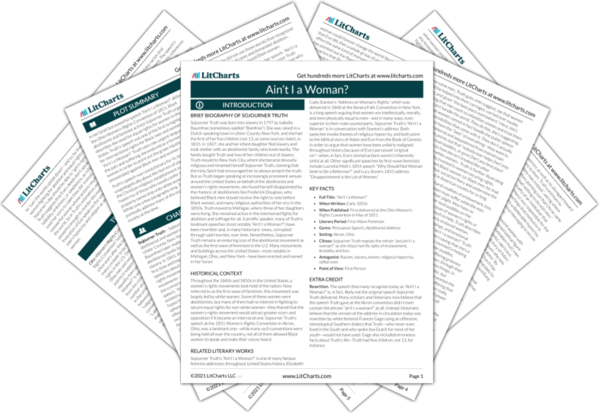 Historical Context of Ain’t I a Woman?

Throughout the 1840s and 1850s in the United States, a women’s rights movements took hold of the nation. Now referred to as the first wave of feminism, this movement was largely led by white women. Some of these women were abolitionists, but many of them had no interest in fighting to secure equal rights for non-white women—they feared that the women’s rights movement would attract greater scorn and opposition if it became an interracial one. Sojourner Truth’s speech at the 1851 Women’s Rights Convention in Akron, Ohio, was a landmark one—while many such conventions were being held all over the country, not all of them allowed Black women to speak and make their voices heard.

Other Books Related to Ain’t I a Woman?

Sojourner Truth’s “Ain’t I a Woman?” is one of many famous feminist addresses throughout United States history. Elizabeth Cady Stanton’s “Address on Woman’s Rights,” which was delivered in 1848 at the Seneca Falls Convention in New York, is a long speech arguing that women are intellectually, morally, and even physically equal to men—and in many ways, even superior to their male counterparts. Sojourner Truth’s “Ain’t I a Woman” is in conversation with Stanton’s address. Both speeches invoke themes of religious hypocrisy, and both point to the biblical story of Adam and Eve from the Book of Genesis in order to argue that women have been unfairly maligned throughout history because of Eve’s perceived “original sin”—when, in fact, Eve’s storied actions weren’t inherently sinful at all. Other significant speeches by first-wave feminists include Lucretia Mott’s 1854 speech “Why Should Not Woman Seek to Be a Reformer?” and Lucy Stone’s 1855 address “Disappointment is the Lot of Women.”
Key Facts about Ain’t I a Woman?

Extra Credit for Ain’t I a Woman?

Rewritten. The speech that many recognize today as “Ain’t I a Woman?” is, in fact, likely not the original speech Sojourner Truth delivered. Many scholars and historians now believe that the speech Truth gave at the Akron convention didn’t even contain the phrase “ain’t I a woman?” at all. Instead, historians believe that the version of the address in circulation today was rewritten by white feminist Frances Gage using an offensive, stereotypical Southern dialect that Truth—who never even lived in the South and who spoke low Dutch for most of her youth—would not have used. Gage also included erroneous facts about Truth’s life—Truth had five children, not 13, for instance. 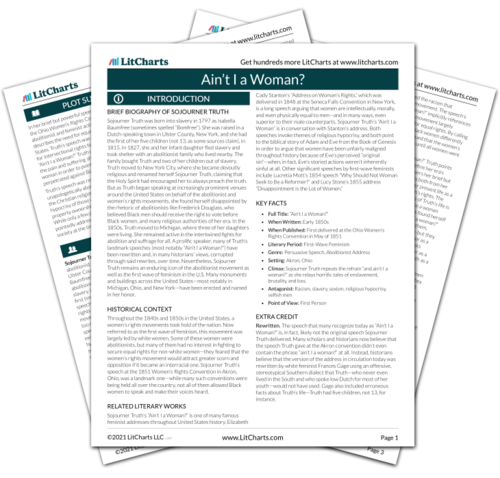 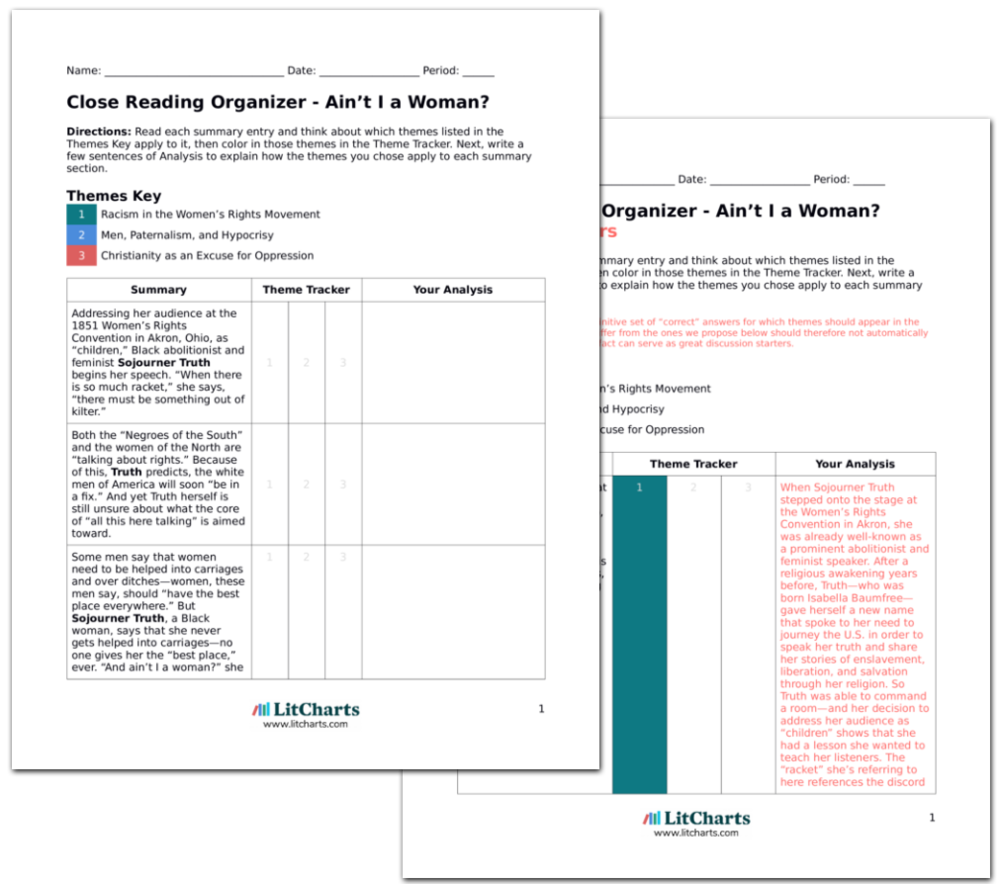