Download this LitChart! (PDF)
Teachers and parents! Struggling with distance learning? Our Teacher Edition on Big Two-Hearted River can help.

Welcome to the LitCharts study guide on Ernest Hemingway's Big Two-Hearted River. Created by the original team behind SparkNotes, LitCharts are the world's best literature guides.

A concise biography of Ernest Hemingway plus historical and literary context for Big Two-Hearted River.

A quick-reference summary: Big Two-Hearted River on a single page.

In-depth summary and analysis of every part of Big Two-Hearted River. Visual theme-tracking, too.

Explanations of Big Two-Hearted River's symbols, and tracking of where they appear.

Ernest Hemingway was born in Oak Park, Illinois, to well-educated, affluent parents. His lifelong interest in the outdoors was inspired by his father, who took young Hemingway on camping trips and taught him how to hunt and fish. When he was just 18, Hemingway went to Italy to work as an ambulance driver for the Red Cross during World War I and was badly wounded there. After this, Hemingway moved to Canada, where he got a job as a reporter for the Toronto Star Weekly. He married his first wife, Hadley Richardson, and they moved to Paris in 1921, where Hemingway worked as a foreign correspondent for a newspaper. In Paris, Hemingway spent time with well-known expatriate writers including Gertrude Stein, Ezra Pound, F. Scott Fitzgerald, and James Joyce, a group whom Stein dubbed the “Lost Generation.” While keeping his job as a newspaper reporter, Hemingway also began to seriously write fiction, and published the short story collection In Our Time and his first novel, The Sun Also Rises. In 1928, he moved to Florida, and A Farewell to Arms was published the following year, establishing Hemingway as a major American writer. His third wife, Martha Gelhorn, inspired him to write For Whom the Bell Tolls, for which he received a Pulitzer nomination. In 1952, he went on to publish The Old Man and the Sea, which won the Pulitzer Prize for Fiction. In 1954, he won the Nobel Prize in Literature. By this time, Hemingway’s mental and physical health was slowly deteriorating due to alcoholism and a possible genetic disorder. On July 2, 1961, he shot himself and died at his home in Ketchum, Idaho.
Get the entire Big Two-Hearted River LitChart as a printable PDF.
"My students can't get enough of your charts and their results have gone through the roof." -Graham S.
Download 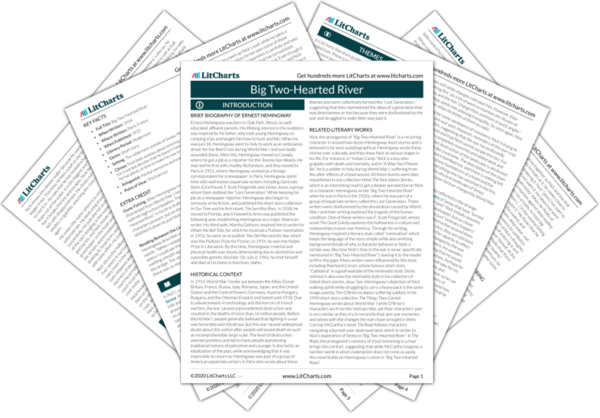 In 1914, World War I broke out between the Allies (Great Britain, France, Russia, Italy, Romania, Japan, and the United States) and the Central Powers (Germany, Austria-Hungary, Bulgaria, and the Ottoman Empire) and lasted until 1918. Due to advancements in technology and the horrors of trench warfare, the war caused unprecedented destruction and resulted in the deaths of more than 16 million people. Before World War I, people generally believed that fighting in a war was honorable and chivalrous, but this war caused widespread doubt about this notion after people witnessed death on such an incomprehensibly large scale. The level of destruction seemed pointless and led to many people questioning traditional notions of patriotism and courage. It also led to an idealization of the past, while acknowledging that it was impossible to return to. Hemingway was part of a group of American expatriate writers in Paris who wrote about these themes and were collectively termed the “Lost Generation,” suggesting that they represented the ideas of a generation that was directionless or lost because they were disillusioned by the war and struggled to make their way past it.

Nick, the protagonist of “Big Two-Hearted River,” is a recurring character in around two dozen Hemingway short stories and is believed to be semi-autobiographical. Hemingway wrote these stories over a decade, and they show Nick at various stages in his life. For instance, in “Indian Camp,” Nick is a boy who grapples with death and mortality, and in “A Way You’ll Never Be,” he is a soldier in Italy during World War I, suffering from the after-effects of a head wound. All these stories were later republished in one collection titled The Nick Adams Stories, which is an interesting read to get a deeper perspective on Nick as a character. Hemingway wrote “Big Two-Hearted River” when he was in Paris in the 1920s, where he was part of a group of expatriate writers called the Lost Generation. These writers were disillusioned by the devastation caused by World War I and their writing explored the tragedy of the human condition. One of these writers was F. Scott Fitzgerald, whose novel The Great Gatsby explores the hollowness in culture and relationships in post-war America. Through his writing, Hemingway inspired a literary style called “minimalism” which keeps the language of the story simple while also omitting background details of why a character behaves or feels a certain way (like how Nick’s time in the war is never specifically mentioned in “Big Two-Hearted River”), leaving it to the reader to fill in the gaps. Many writers were influenced by this style, including Raymond Carver, whose famous short story “Cathedral” is a good example of the minimalist style. Denis Johnson’s also uses the minimalist style in his collection of linked short stories, Jesus’ Son. Hemingway’s depiction of Nick walking uphill while struggling to carry a heavy pack is the same image used by Tim O’Brien to depict suffering soldiers in his 1990 short story collection The Things They Carried. Hemingway wrote about World War I while O’Brien’s characters are from the Vietnam War, yet their characters’ pain is very similar as they try to reconcile their pre-war memories and selves with the changes the wars have wrought in them. Cormac McCarthy’s novel The Road follows characters navigating a burned-over destroyed land, which is similar to Nick’s experience of Seney in “Big Two-Hearted River.” In The Road, the protagonist’s memory of trout swimming in a river brings him comfort, suggesting that while McCarthy imagines a harsher world in which redemption does not come as easily, this novel builds on Hemingway’s vision in “Big Two-Hearted River.”
Key Facts about Big Two-Hearted River

Gone Fishing. After Hemingway returned wounded and disoriented from World War I, he took a fishing trip to Michigan with his high school buddies. This experience inspired “Big Two-Hearted River.” In his first drafts of the story, he had other characters present, but on the advice of Gertrude Stein, he whittled it down to just Nick and the wilderness.

Reading Between the Lines. In his memoir A Moveable Feast, Hemingway describes writing “Big Two-Hearted River” in these words: “When I stopped writing I did not want to leave the river where I could see the trout in the pool, its surface pushing and swelling smooth against the resistance of the log-driven piles of the bridge. The story was about coming back from the war but there was no mention of the war in it.”