While freely admitting that the adaptive unconscious sometimes triggers bigotry, Gladwell goes on to argue that most bigotry results from the absence of rapid cognition, and that rapid cognition can be used to fight bigotry. Although rapid cognition involves making assessments based on limited evidence, it also involves simultaneously assessing many different kinds of evidence, such as facial cues, clothing, age, race, etc. Therefore, a bigot, it could be argued, is someone who focuses on only one form of evidence—a person’s race, age, gender, etc.—and ignores all other available evidence. To make his point, Gladwell discusses Bob Golomb, a highly successful car salesman. Golomb sells a huge number of cars each month because he’s adept at sizing up his clients—“thin-slicing” their facial cues, their gestures, etc. Where many other car salesmen focus most of their attention on older, white, male clients, Golomb claims to treat all his clients the same, regardless of their age, race, or gender, instead of letting these factors cloud his judgment. In short, Golomb uses thin-slicing to overcome the bigotry common in his profession—because he focuses on small but important details about his clients’ behavior, he makes perceptive, accurate judgments about the people who walk into his car dealership.

Gladwell arrives at the strange conclusion that, while some bigotry results from rapid cognition, not all rapid cognition is bigoted, and in fact, rapid cognition can stave off some forms of bigotry. Most people are taught not to “judge a book by its cover,” because it’s morally wrong to presume things about other people; or, put another way, because the “cover” isn’t always representative of what’s inside the book. Gladwell offers an interesting reinterpretation of the old saying: he argues that it is, in fact, possible to learn a lot about a book by thin-slicing its cover. To extend the analogy, a bigot isn’t someone who judges a book by its cover; rather, a bigot is someone who focuses on only one small aspect of the “cover” (for example, race, gender, age, etc.), and ignores the rest of the “cover” (facial cues, gestures, intelligence, conversational style, etc.). Thus, Blink argues that there’s nothing necessarily wrong or immoral about thin-slicing, provided that we use the adaptive conscious to its full potential.

The ThemeTracker below shows where, and to what degree, the theme of Rapid Cognition and Prejudice appears in each chapter of Blink. Click or tap on any chapter to read its Summary & Analysis.
How often theme appears:
chapter length:
Chapter
Introduction
Int
Chapter 1
1
Chapter 2
2
Chapter 3
3
Chapter 4
4
Chapter 5
5
Chapter 6
6
Conclusion
Con
Get the entire Blink LitChart as a printable PDF.
"My students can't get enough of your charts and their results have gone through the roof." -Graham S.
Download 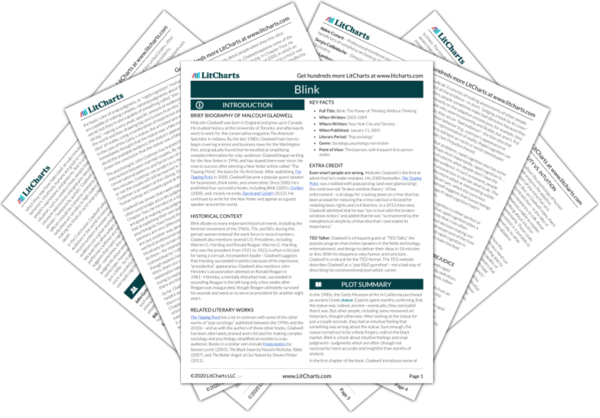 Below you will find the important quotes in Blink related to the theme of Rapid Cognition and Prejudice.
Chapter 1 Quotes

Most of us have difficulty believing that a 275-pound football lineman could have a lively and discerning intellect. We just can't get past the stereotype of the dumb jock. But if all we saw of that person was his bookshelf or the art on his walls, we wouldn't have that same problem.

The results from these experiments are, obviously, quite disturbing. They suggest that what we think of as free will is largely an illusion: much of the time, we are simply operating on automatic pilot, and the way we think and act - and how well we think and act on the spur of the moment - are a lot more susceptible to outside influences than we realize.

The Warren Harding error is the dark side of rapid cognition. It is at the root of a good deal of prejudice and discrimination.

The disturbing thing about the test is that it shows that our unconscious attitudes may be utterly incompatible with our stated conscious values. As it turns out for example, of the fifty thousand African Americans who have taken the Race IAT so far, about half of them, like me, have stronger associations with whites than with blacks. How could we not? We live in North America, where we are surrounded every day by cultural messages linking white with good.

He may make a million snap judgments about a customer's needs and state of mind, but he tries never to judge anyone on the basis of his or her appearance. He assumes that everyone who walks in the door has the exact same chance of buying a car.

Truly successful decision making relies on a balance between deliberate and instinctive thinking.

The problem is that buried among the things that we hate is a class of products that are in that category only because they are weird. They make us nervous. They are sufficiently different that it takes us some time to understand that we actually like them.

Most police officers - well over 90 percent - go their whole career without ever firing at anyone, and those who do describe the experience as so unimaginably stressful that it seems reasonable to ask if firing a gun could be the kind of experience that could cause temporary autism.

What police training does, at its best, is teach officers how to keep themselves out of this kind of trouble; to avoid the risk of momentary autism. In a traffic stop, for instance, the officer is trained to park behind the car. If it's at night, he shines his brights directly into the car. He walks toward the car on the driver's side, then stops and stands just behind the driver, shining his flashlight over the shoulder onto his or her lap.