Download this LitChart! (PDF)
Teachers and parents! Struggling with distance learning? Our Teacher Edition on Brooklyn can help.

Welcome to the LitCharts study guide on Colm Tóibín's Brooklyn. Created by the original team behind SparkNotes, LitCharts are the world's best literature guides.

A concise biography of Colm Tóibín plus historical and literary context for Brooklyn.

A quick-reference summary: Brooklyn on a single page.

In-depth summary and analysis of every part of Brooklyn. Visual theme-tracking, too.

Explanations of Brooklyn's symbols, and tracking of where they appear.

An interactive data visualization of Brooklyn's plot and themes.

One of five children, Colm Tóibín was born in Enniscorthy in County Wexford, Ireland in 1955. He couldn’t read until he was nine years old, at which point he developed a stutter. When he was 15, he attended St Peter’s College, where for two years he was a boarding student who fell in love with poetry. When he left secondary school, he took a job as a bartender for the summer and read large amounts of Ernest Hemingway. Inspired by Hemingway’s writing, he lived for a short stretch of time in Barcelona, though he first attended University College Dublin. His first novel, The South, was informed by his time in Barcelona, as was Homage to Barcelona. After returning to Ireland and working for a time toward a master’s degree, he left school to pursue a career in journalism. During the 1980s, he served as editor of the Irish magazine Magill. Tóibín’s most famous novel, Brooklyn, appeared in 2009 and was a bestseller. His writing—which includes novels, plays, essays, and short stories—has won numerous awards, and he has published nine novels.
Get the entire Brooklyn LitChart as a printable PDF.
"My students can't get enough of your charts and their results have gone through the roof." -Graham S.
Download 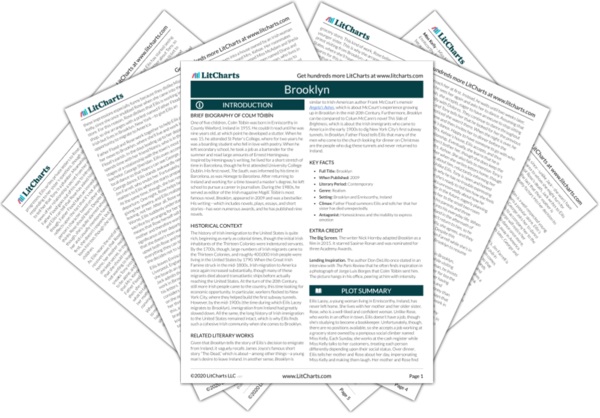 The history of Irish immigration to the United States is quite rich, beginning as early as colonial times, though the initial Irish inhabitants of the Thirteen Colonies were indentured servants. By the 1700s, though, large numbers of Irish migrants came to the Thirteen Colonies, and roughly 400,000 Irish people were living in the United States by 1790. When the Great Irish Famine struck in the mid-1800s, Irish migration to America once again increased substantially, though many of these migrants died aboard transatlantic ships before actually reaching the United States. At the turn of the 20th Century, still more Irish people came to the country, this time looking for economic opportunity. In particular, workers flocked to New York City, where they helped build the first subway tunnels. However, by the mid-1900s (the time during which Eilis Lacey migrates to Brooklyn), immigration from Ireland had greatly slowed down. All the same, the long history of Irish immigration to the United States remained intact, which is why Eilis finds such a cohesive Irish community when she comes to Brooklyn.

Other Books Related to Brooklyn

Given that Brooklyn tells the story of Eilis’s decision to emigrate from Ireland, it vaguely recalls James Joyce’s famous short story “The Dead,” which is about—among other things—a young man’s desire to leave Ireland. In another sense, Brooklyn is similar to Irish-American author Frank McCourt’s memoir Angela’s Ashes, which is about McCourt’s experience growing up in Brooklyn in the mid-20th Century. Furthermore, Brooklyn can be compared to Colum McCann’s novel This Side of Brightness, which is about the Irish immigrants who came to America in the early 1900s to dig New York City’s first subway tunnels. In Brooklyn, Father Flood tells Eilis that many of the men who come to the church looking for dinner on Christmas are the people who dug these tunnels and never returned to Ireland.
Key Facts about Brooklyn

The Big Screen. The writer Nick Hornby adapted Brooklyn as a film in 2015. It starred Saoirse Ronan and was nominated for three Academy Awards.

Lending Inspiration. The author Don DeLillo once stated in an interview with The Paris Review that he often finds inspiration in a photograph of Jorge Luis Borges that Colm Tóibín sent him. The picture hangs in his office, peering at him with intensity. 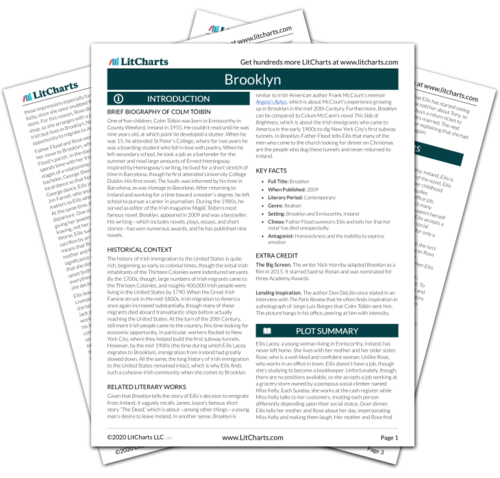 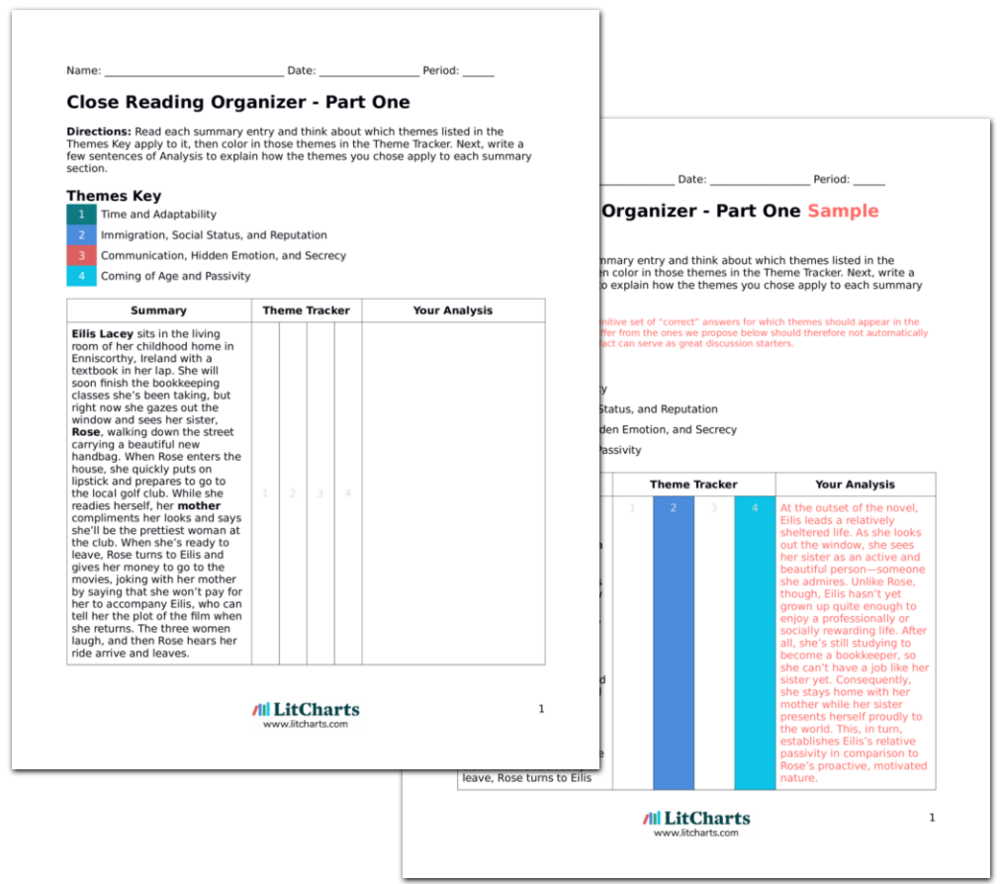