Download this LitChart! (PDF)
Teachers and parents! Struggling with distance learning? Our Teacher Edition on Cat’s Cradle can help.

Welcome to the LitCharts study guide on Kurt Vonnegut's Cat’s Cradle. Created by the original team behind SparkNotes, LitCharts are the world's best literature guides.

A concise biography of Kurt Vonnegut plus historical and literary context for Cat’s Cradle.

A quick-reference summary: Cat’s Cradle on a single page.

In-depth summary and analysis of every chapter of Cat’s Cradle. Visual theme-tracking, too.

Explanations of Cat’s Cradle's symbols, and tracking of where they appear.

An interactive data visualization of Cat’s Cradle's plot and themes.

Kurt Vonnegut was the youngest of three siblings born to Kurt Vonnegut Sr. and Edith Vonnegut (née Lieber). Both of his parents were descended from wealthy German immigrant families, but decided not to teach Vonnegut German language and culture due to a pressure to seem more pro-American. After high school, Vonnegut studied biochemistry for two years at Cornell University. He dropped out in in January of 1942 and joined the U.S. army, receiving training in mechanical engineering. In 1944, Vonnegut’s mother committed suicide. Soon after, Vonnegut was sent to fight in World War II’s Battle of the Bulge in the Ardennes region of Europe. He was captured by the Germans and interned in a Dresden prison camp. During the allied bombings of Dresden, which devastated the city, Vonnegut survived by hiding underground in a meat locker. He and his fellow prisoners were then put to work recovering bodies from the rubble. Vonnegut escaped Germany and returned to the U.SA. in 1945, marrying his high school girlfriend, Jane Marie Cox, soon after. They had three children while Vonnegut supported his fledgling writing career by working various jobs. His first novel was published in 1952, with Cat’s Cradle being his fourth, published out in 1963. In 1958, Vonnegut adopted his sister’s three children after she died from cancer. Slaughterhouse-Five, his most famous work, was published in 1969 and draws on his own experiences in the war. Throughout the 1970s, Vonnegut continued to enjoy success with his publications while also battling with depression. His last novel was published in 1997. Vonnegut died at the age of 84 from head injuries sustained in a fall.
Get the entire Cat’s Cradle LitChart as a printable PDF.
"My students can't get enough of your charts and their results have gone through the roof." -Graham S.
Download 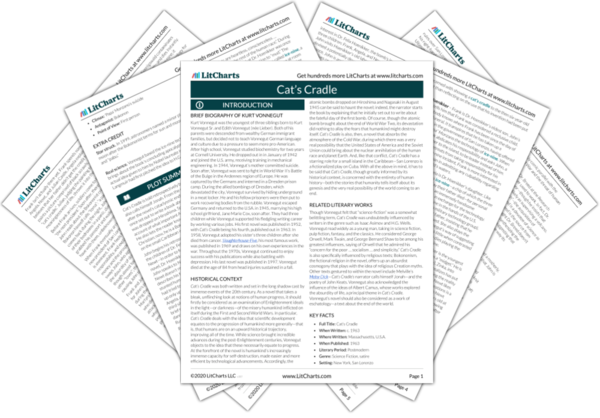 Cat’s Cradle was both written and set in the long shadow cast by immense events of the 20th century. As a novel that takes a bleak, unflinching look at notions of human progress, it should firstly be considered as an examination of Enlightenment ideals in the light—or darkness—of the misery humankind inflicted on itself during the First and Second World Wars. In particular, Cat’s Cradle deals with the idea that scientific development equates to the progression of humankind more generally—that is, that humans are on an upward historical trajectory, improving all of the time. While science brought incredible advances during the post-Enlightenment centuries, Vonnegut objects to the idea that these necessarily equate to progress. At the forefront of the novel is humankind’s increasingly immense capacity for self-destruction, made easier and more efficient by technological advancements. Accordingly, the atomic bombs dropped on Hiroshima and Nagasaki in August 1945 can be said to haunt the novel; indeed, the narrator starts the book by explaining that he initially set out to write about the fateful day of the first bomb. Of course, though the atomic bomb brought about the end of World War Two, its devastation did nothing to allay the fears that humankind might destroy itself. Cat’s Cradle is also, then, a novel that absorbs the atmosphere of the Cold War, during which there was a very real possibility that the United States of America and the Soviet Union could bring about the nuclear annihilation of the human race and planet Earth. And, like that conflict, Cat’s Cradle has a starring role for a small island in the Caribbean—San Lorenzo is a fictionalized play on Cuba. With all the above in mind, it has to be said that Cat’s Cradle, though greatly informed by its historical context, is concerned with the entirety of human history—both the stories that humanity tells itself about its genesis and the very real possibility of the world coming to an end.

Other Books Related to Cat’s Cradle

Though Vonnegut felt that “science-fiction” was a somewhat belittling term, Cat’s Cradle was undoubtedly influenced by writers in the genre such as Isaac Asimov and H.G. Wells. Vonnegut read widely as a young man, taking in science fiction, pulp fiction, fantasy, and the classics. He considered George Orwell, Mark Twain, and George Bernard Shaw to be among his greatest influences, saying of Orwell that he admired his “concern for the poor … socialism … and simplicity.” Cat’s Cradle is also specifically influenced by religious texts; Bokononism, the fictional religion in the novel, offers up an absurdist cosmogony that plays with the idea of religious Creation myths. Other texts gestured to within the novel include Melville’s Moby-Dick—Cat’s Cradle’s narrator calls himself Jonah—and the poetry of John Keats. Vonnegut also acknowledged the influence of the ideas of Albert Camus, whose works explored the absurdity of life, a principal theme in Cat’s Cradle. Vonnegut’s novel should also be considered as a work of eschatology—a text about the end of the world.
Key Facts about Cat’s Cradle

Star struck. In 1999, astronomers named a minor planet and its moon after the Bokononist terms for sun and moon: “borasisi” and “pabu.”

Real science. Vonnegut based the ice-nine technology—which brings about the book’s concluding apocalyptic scenes—on an actual idea given to him by Nobel laureate Irving Langmuir. Langmuir had first pitched the idea to H.G. Wells. 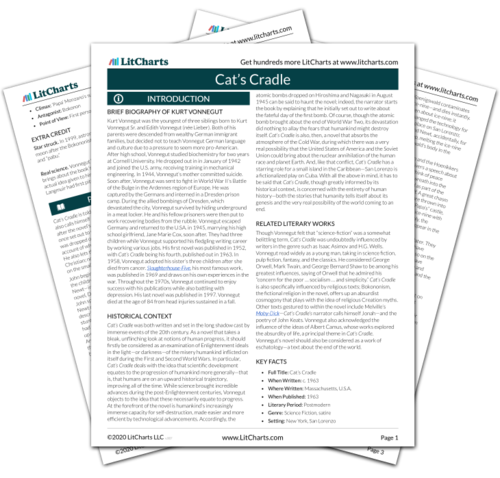