Get LitCharts A+
LitCharts assigns a color and icon to each theme in Civilization and Its Discontents, which you can use to track the themes throughout the work.

Freud believes that religion, belief, and delusion (or misplaced belief) play an important role in individual and social regulation. In essence, religion helps individuals to feel guilty about certain things, and codifies this guilt in different ways as a means of regulating human actions for the good of larger social groups. The ultimate example of this, as Freud sees it, is the Christian “Golden Rule,” which is found in similar form in many other cultures and religions. Freud believes that the Golden Rule is fundamentally illogical, because humans have little reason to “love a stranger as oneself,” and even less reason to “love an enemy as oneself.”

This Rule has become a part of individual and social moral codes because it is a socially-advantageous formulation, however—it allows individuals and societies to regulate human aggression, and to direct that aggression inward, into a sense of guilt for failing to live up to an impossible moral ideal—rather than outward, against another person or group of people. Freud argues that all religions channel human aggression inward, into the position of the super-ego, which mimics the kind of control the state wishes to have over people—in order to manage individual wants and prevent people from killing each other, having sex with each other indiscriminately, or otherwise destroying society.

Thus civilization and its development are utterly bound up in the development of the super-ego, and the guilt that the super-ego wields over the ego. Without these psychological forces, there can be no society, and without society, there can be no psychological forces. Freud argues that the two arenas, individual and social, are entirely intertwined. In summation, it would make no sense to say that religion—or civil society—is “good” or “bad.” Instead, one can only describe these phenomena as outgrowths of the forces of regulation at play within the human mind—forces Freud believes to be natural, “built in” to humans at the biological level.

The ThemeTracker below shows where, and to what degree, the theme of Religion, Delusion, and Belief appears in each chapter of Civilization and Its Discontents. Click or tap on any chapter to read its Summary & Analysis.
How often theme appears:
chapter length:
Chapter
Chapter 1
1
Chapter 2
2
Chapter 3
3
Chapter 4
4
Chapter 5
5
Chapter 6
6
Chapter 7
7
Chapter 8
8
Get the entire Civilization LitChart as a printable PDF.
"My students can't get enough of your charts and their results have gone through the roof." -Graham S.
Download 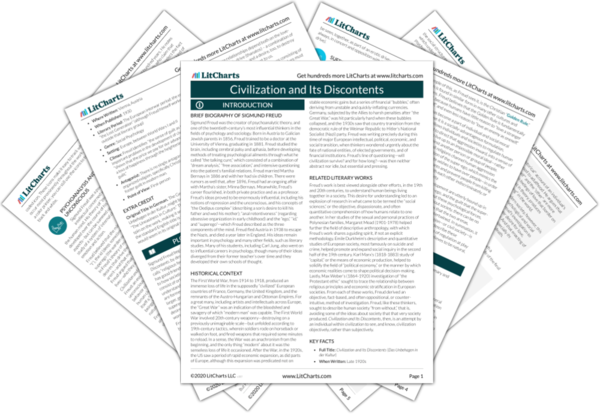 Religion, Delusion, and Belief Quotes in Civilization and Its Discontents

Below you will find the important quotes in Civilization and Its Discontents related to the theme of Religion, Delusion, and Belief.
Chapter 1 Quotes

The origin of the religious attitude can be traced back in clear outlines as far as the feeling of infantile helplessness.

The question of the purpose of human life has been raised countless times; it has never yet received a satisfactory answer and perhaps does not admit of one.

Another procedure [to avoid pain] operates more energetically and thoroughly. It regards reality as the sole enemy and as the source of all suffering, with which it is impossible to live, so that one must break off all relations with it if one is to be in any way happy. The hermit turns his back on the world . . .

Perhaps St. Francis of Assisi went furthest in exploiting love for the benefit of an inner feeling of happiness.

And now it is to be expected that the other of the two “Heavenly Powers,” eternal Eros, will make an effort to assert himself in the struggle with his equally immortal adversary [Thanatos]. But who can see with what success and with what result? 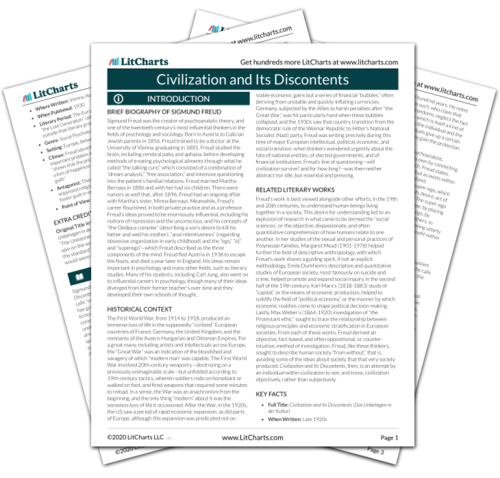 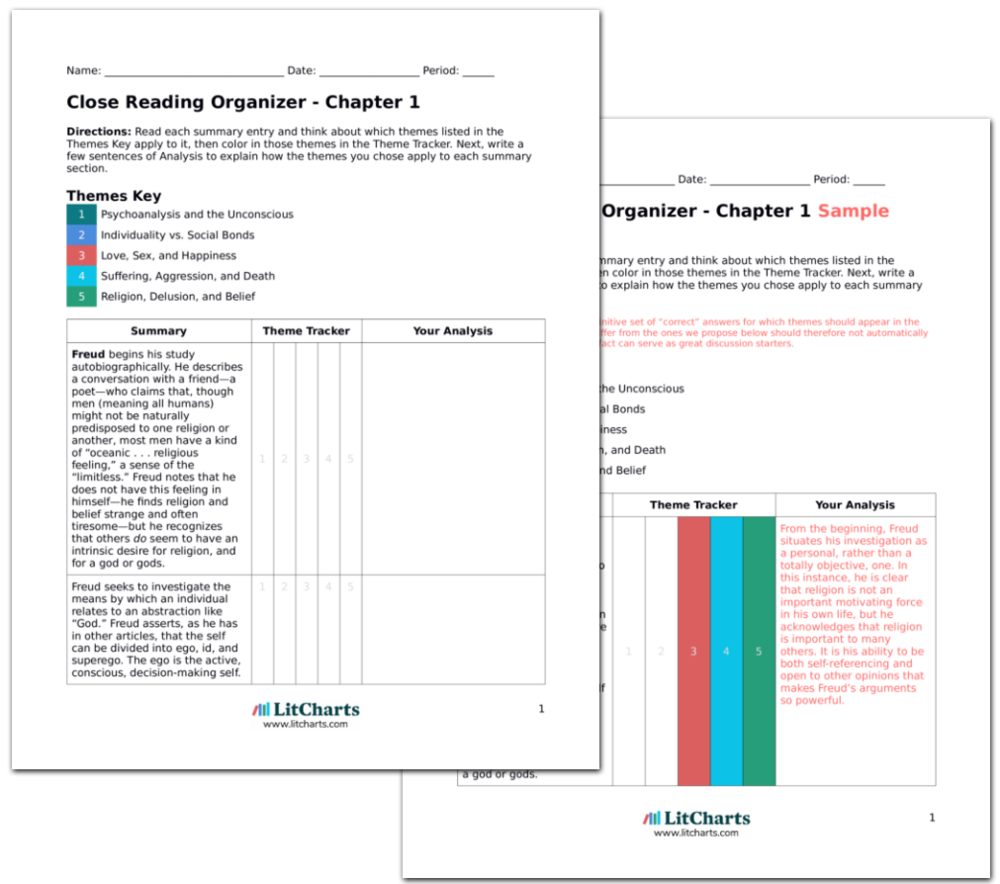