Download this LitChart! (PDF)
Teachers and parents! Struggling with distance learning? Our Teacher Edition on Cloudstreet can help.

Welcome to the LitCharts study guide on Tim Winton's Cloudstreet. Created by the original team behind SparkNotes, LitCharts are the world's best literature guides.

A concise biography of Tim Winton plus historical and literary context for Cloudstreet.

A quick-reference summary: Cloudstreet on a single page.

In-depth summary and analysis of every chapter of Cloudstreet. Visual theme-tracking, too.

Explanations of Cloudstreet's symbols, and tracking of where they appear.

An interactive data visualization of Cloudstreet's plot and themes.

Tim Winton was born in the suburbs of Perth, the Australian city where Cloudstreet takes place. Denise, his wife, was a student nurse who helped him recover from a car accident when he was 18. Winton wrote his first novel, An Open Swimmer, while he was studying at university. His early books saw some success, but his career as an author didn’t truly take off until the publication of Cloudstreet in 1991. His fiction has earned several literary awards, including the Miles Franklin Award and the Man Booker Prize for Fiction. Winton is also a strong advocate for environmental conservation, supporting organizations such as the Australian Marine Conservation Society and the Environment Defender’s Office. His passion for protecting the environment manifests itself in his writing, which often features detailed and realistic depictions of Australian landscapes and wildlife. To this day, Winton is considered one of Australia’s best known and most beloved authors, and his upbringing in Perth makes him uniquely qualified to write about the ordinary and extraordinary aspects of life in that region of the country. He still lives in Perth with his wife.
Get the entire Cloudstreet LitChart as a printable PDF.
"My students can't get enough of your charts and their results have gone through the roof." -Graham S.
Download 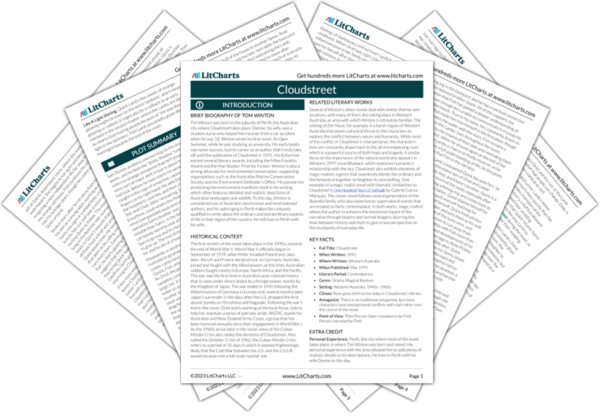 The first stretch of the novel takes place in the 1940s, towards the end of World War II. World War II officially began in September of 1939, when Hitler invaded Poland and, days later, the UK and France declared war on Germany. Australia joined and fought with the Allied powers at this time; Australian soldiers fought mostly in Europe, North Africa, and the Pacific. The war was the first time in Australia’s post-colonial history that it came under direct attack by a foreign power, mostly by the Kingdom of Japan. The war ended in 1945 following the Allied invasion of Germany in Europe and, several months later, Japan’s surrender in the days after the U.S. dropped the first atomic bombs on Hiroshima and Nagasaki. Following the war’s end in the novel, Oriel starts working at the local Anzac club to help her maintain a sense of patriotic pride. ANZAC stands for Australian and New Zealand Army Corps, a group that has been honored annually since their engagement in World War I. As the 1960s arrive later in the novel, news of the Cuban Missile Crisis also rattles the denizens of Cloudstreet. Also called the October Crisis of 1962, the Cuban Missile Crisis refers to a period of 35 days in which it seemed frighteningly likely that the Cold War between the U.S. and the U.S.S.R. would escalate into a full-scale nuclear war.

Other Books Related to Cloudstreet

Several of Winton’s other novels deal with similar themes and locations, with many of them also taking place in Western Australia, an area with which Winton is intimately familiar. The setting of Dirt Music, for example, is a harsh region of Western Australia that poses a physical threat to the characters to explore the conflict between nature and humanity. While most of the conflict in Cloudstreet is interpersonal, the characters’ lives are constantly drawn back to the all-encompassing river, which is a powerful source of both hope and tragedy. A similar focus on the importance of the natural world also appears in Winton’s 1997 novel Blueback, which examines humanity’s relationship with the sea. Cloudstreet also exhibits elements of magic realism, a genre that seamlessly blends the ordinary and the fantastical together to heighten its storytelling. One example of a magic realist novel with thematic similarities to Cloudstreet is One Hundred Years of Solitude by Gabriel García Márquez. The classic novel follows several generations of the Buendía family, who also experiences supernatural events that are treated as fairly commonplace. In both works, magic realism allows the author to enhance the emotional impact of the narrative through bizarre and surreal imagery, blurring the lines between history and myth to give a new perspective on the mundanity of everyday life.
Key Facts about Cloudstreet

Personal Experience. Perth, the city where most of the novel takes place, is where Tim Winton was born and raised. His personal experience with the area allowed him to add plenty of realistic details to his descriptions. He lives in Perth with his wife Denise to this day.

Like A Light Shining. Quick Lamb’s few weeks of strange glowing might be a pun on the word “lambent,” which means glowing or radiant. It might also be a callback to an early moment in the second chapter, where the Lambs are described as clearly God-fearing people because of “the way they set up a light in the darkness.” Fish Lamb also briefly glows like moonlight towards the end of the novel. 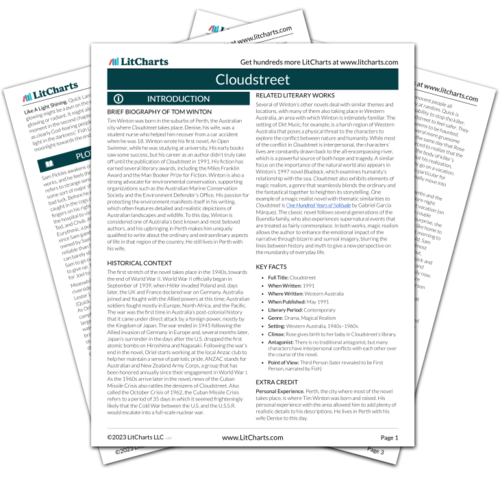 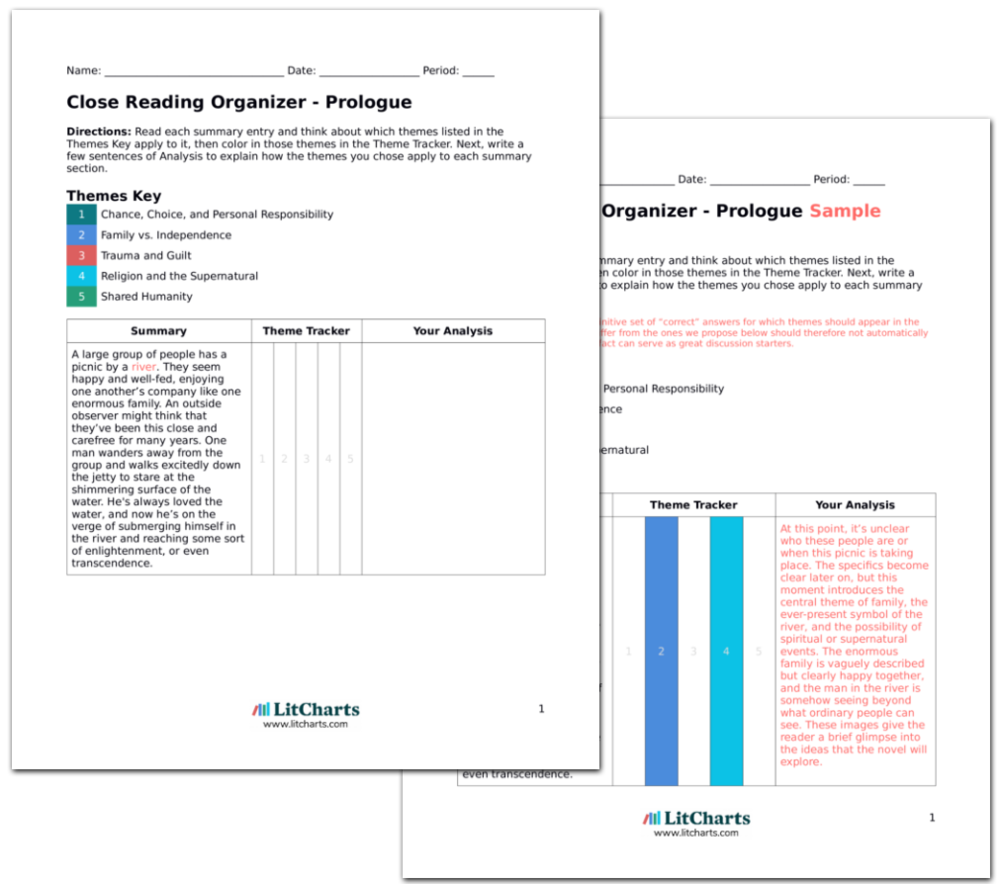