Download this LitChart! (PDF)
Teachers and parents! Struggling with distance learning? Our Teacher Edition on Code Name Verity can help.

Welcome to the LitCharts study guide on Elizabeth Wein's Code Name Verity. Created by the original team behind SparkNotes, LitCharts are the world's best literature guides.

A concise biography of Elizabeth Wein plus historical and literary context for Code Name Verity.

A quick-reference summary: Code Name Verity on a single page.

In-depth summary and analysis of every chapter of Code Name Verity. Visual theme-tracking, too.

Explanations of Code Name Verity's symbols, and tracking of where they appear.

Though Wein was born in New York City, her family moved to England for her father’s work when she was three years old. Three years later, the family moved again to Kingston, Jamaica, where Wein became fluent in Jamaican patois. Around this time, Wein also wrote her first book, a rewritten, feminized version of the Hardy Boys mystery series. When Wein’s parents separated, Wein’s mother moved her three children back to the States. Wein’s mother died in a car accident in 1978, after which Wein and her siblings were raised by their maternal grandmother. Following high school, Wein attended Yale University, spent a year studying in England, and then earned a PhD in Folklore at the University of Pennsylvania. It’s there that she met her husband at an event for hobby church bell ringers. The couple moved to England and then to Scotland, where they still live today. Both Wein and her husband have pilot’s licenses, which dramatically shifted the focus of Wein’s novels: before getting her pilot’s license, her novels were mostly about Arthurian legends. After getting her license, most of her novels have been, like Code Name Verity, about women and flight. Code Name Verity is Wein’s most famous novel.
Get the entire Code Name Verity LitChart as a printable PDF.
"My students can't get enough of your charts and their results have gone through the roof." -Graham S.
Download 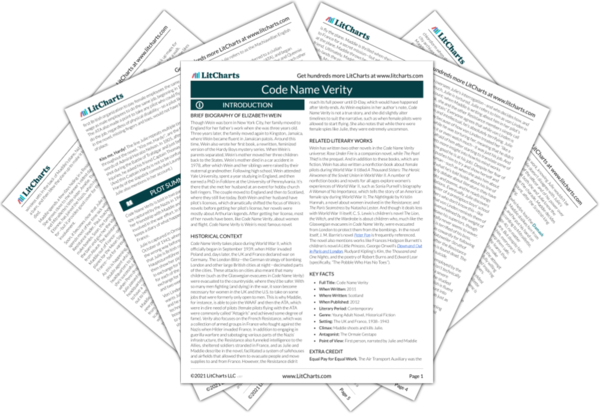 Code Name Verity takes place during World War II, which officially began in September 1939, when Hitler invaded Poland and, days later, the UK and France declared war on Germany. The London Blitz—the German strategy of bombing London and other large British cities at night—decimated parts of the cities. These attacks on cities also meant that many children (such as the Glaswegian evacuees in Code Name Verity) were evacuated to the countryside, where they’d be safer. With so many men fighting (and dying) in the war, it soon become necessary for women in the UK and the U.S. to take on some jobs that were formerly only open to men. This is why Maddie, for instance, is able to join the WAAF and then the ATA, which were in dire need of pilots (female pilots flying with the ATA were commonly called “Attagirls” and achieved some degree of fame). Verity also focuses on the French Resistance, which was a collection of armed groups in France who fought against the Nazis when Hitler invaded France. In addition to engaging in guerilla warfare and sabotaging various parts of the Nazis’ infrastructure, the Resistance also funneled intelligence to the Allies, sheltered soldiers stranded in France, and as Julie and Maddie describe in the novel, facilitated a system of safehouses and airfields that allowed them to evacuate people and move supplies to and from France. However, the Resistance didn’t reach its full power until D-Day, which would have happened after Verity ends. As Wein explains in her author’s note, Code Name Verity is not a true story, and she did slightly alter timelines to suit the narrative, such as when female pilots were allowed to start flying. She also notes that while there were female spies like Julie, they were extremely uncommon.

Wein has written two other novels in the Code Name Verity universe: Rose Under Fire is a companion novel, while The Pearl Thief is the prequel. And in addition to these books, which are fiction, Wein has also written a nonfiction book about female pilots during World War II titled A Thousand Sisters: The Heroic Airwomen of the Soviet Union in World War II. A number of nonfiction books and novels for all ages explore women’s experiences of World War II, such as Sonia Purnell’s biography A Woman of No Importance, which tells the story of an American female spy during World War II; The Nightingale by Kristin Hannah, a novel about women involved in the Resistance; and The Paris Seamstress by Natasha Lester. And though it deals less with World War II itself, C. S. Lewis’s children’s novel The Lion, the Witch, and the Wardrobe is about children who, much like the Glaswegian evacuees in Code Name Verity, were evacuated from London to protect them from the bombings. In the novel itself, J. M. Barrie’s novel Peter Pan is frequently referenced. The novel also mentions works like Frances Hodgson Burnett’s children’s novel A Little Princess, George Orwell’s Down and Out in Paris and London, Rudyard Kipling’s Kim, the Thousand and One Nights, and the poetry of Robert Burns and Edward Lear (specifically, “The Pobble Who Has No Toes”).
Key Facts about Code Name Verity

Equal Pay for Equal Work. The Air Transport Auxiliary was the first British organization to pay female employees the same wage as male employees to do the same job, beginning in 1943. The ATA also made a point to take any pilot who could fly and do the job, regardless of physical disability—so a pilot like Jamie in the novel, missing fingers and toes, would not have been out of place.

Kiss me, Hardy! The line Julie repeats multiple times throughout the novel, “Kiss me, Hardy!”, are the famous last words of Admiral Horatio Nelson. In 1805, after Nelson was shot during the Battle of Trafalgar and just before he died of his injuries, he asked his friend Captain Thomas Hardy to kiss him. (And this Captain Hardy is not to be confused with Oliver Hardy of the slapstick comedy duo Laurel and Hardy, whom Julie also mentions in her account.) 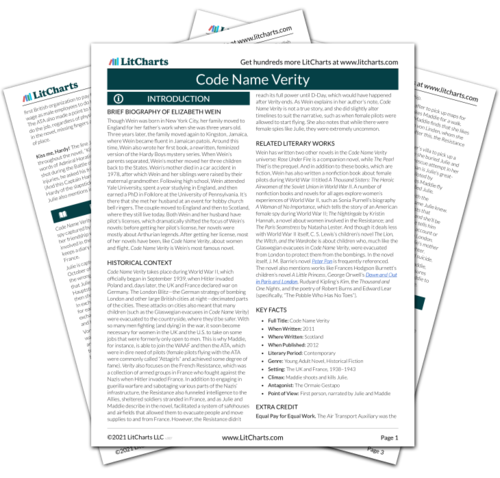 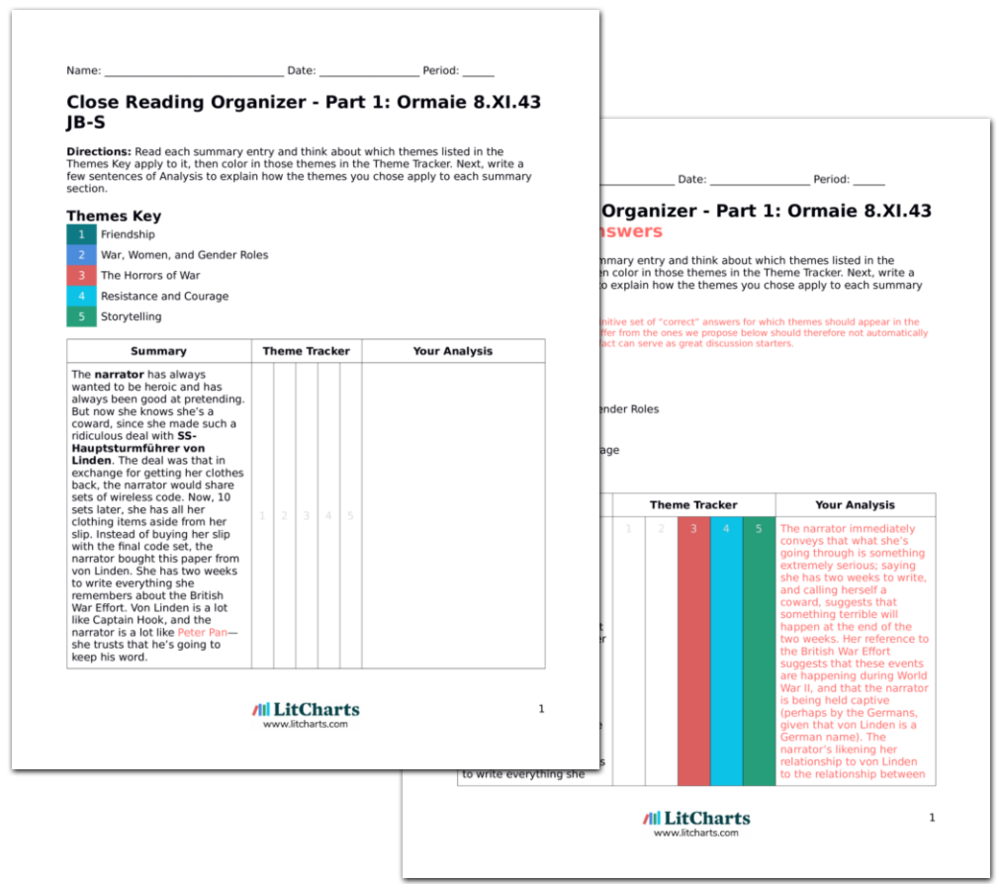