Download this LitChart! (PDF)
Teachers and parents! Struggling with distance learning? Our Teacher Edition on Dreamland can help.

Welcome to the LitCharts study guide on Sam Quinones's Dreamland. Created by the original team behind SparkNotes, LitCharts are the world's best literature guides.

A concise biography of Sam Quinones plus historical and literary context for Dreamland.

A quick-reference summary: Dreamland on a single page.

In-depth summary and analysis of every chapter of Dreamland. Visual theme-tracking, too.

Explanations of Dreamland's symbols, and tracking of where they appear.

An interactive data visualization of Dreamland's plot and themes.

Sam Quinones is an American journalist. He was born in Claremont, California and graduated from the University of California at Berkeley with degrees in economics and American history. Quinones moved to Mexico in 1994 and worked there as a freelance reporter from 1994 to 2004. From 2004 to 2014 he worked as a reporter for the Los Angeles Times.  He has written for the Orange County Register, the Stockton Record in California, as well as the Tacoma News-Tribune. Quinones took a break from reporting in 2013 to write Dreamland. His other books are True Tales from Another Mexico (2001), Antonio’s Gun and Delfino’s Dream (2007), and The Virgin of the American Dream (2019), which is a book of photo journalism. In 2015, he won the 2015 National Book Critics Circle Award for Dreamland.
Get the entire Dreamland LitChart as a printable PDF.
"My students can't get enough of your charts and their results have gone through the roof." -Graham S.
Download 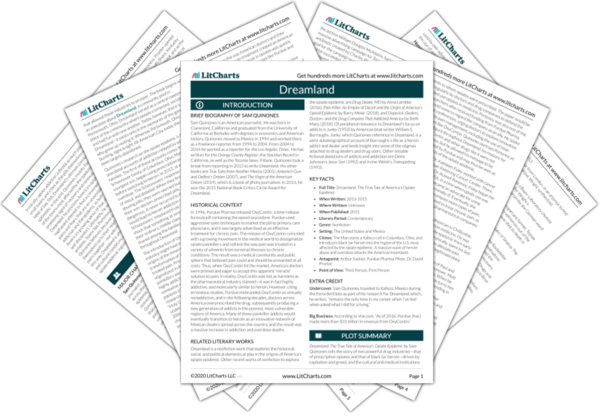 In 1996, Purdue Pharma released OxyContin, a time-release formula pill containing the opioid oxycodone. Purdue used aggressive sales techniques to market the pill to primary care physicians, and it was largely advertised as an effective treatment for chronic pain. The release of OxyContin coincided with a growing movement in the medical world to destigmatize opiate painkillers and rethink the way pain was treated in a variety of ailments from terminal illnesses to chronic conditions. The result was a medical community and public sphere that believed pain could and should be prevented at all costs. Thus, when OxyContin hit the market, America’s doctors were primed and eager to accept this apparent “miracle” solution to pain. In reality, OxyContin was not as harmless as the pharmaceutical industry claimed—it was in fact highly addictive, and molecularly similar to heroin. However, citing erroneous studies, Purdue misbranded OxyContin as virtually nonaddictive, and in the following decades, doctors across America overprescribed the drug, subsequently producing a new generation of addicts in the poorest, most vulnerable regions of America. Many of these painkiller addicts would eventually transition to heroin as an innovative network of Mexican dealers spread across the country, and the result was a massive increase in addiction and overdose deaths.

Other Books Related to Dreamland

Dreamland is a nonfiction work that explores the historical, social, and political elements at play in the origins of America’s opiate epidemic. Other recent works of nonfiction to explore the opiate epidemic are Drug Dealer, MD by Anna Lembke (2016), Pain Killer: An Empire of Deceit and the Origin of America’s Opioid Epidemic by Barry Meier (2018), and Dopesick: Dealers, Doctors, and the Drug Company That Addicted America by Beth Macy (2018). Of peripheral relevance to Dreamland’s focus on addicts is Junky (1953) by American beat writer William S. Burroughs. Junky, which Quinones reference in Dreamland, is a semi-autobiographical account of Burroughs’s life as a heroin addict and dealer and lends insight into some of the stigmas attached to drug dealers and drug users. Other notable fictional depictions of addicts and addiction are Denis Johnson’s Jesus’ Son (1992) and Irvine Welsh’s Trainspotting (1993).
Key Facts about Dreamland

Undercover. Sam Quinones traveled to Xalisco, Mexico during the Feria del Elote as part of his research for Dreamland, which, he writes, “remains the only time in my career when I’ve lied when asked what I did for a living.”

Big Business. According to Vox.com, “As of 2016, Purdue [has] made more than $31 billion in revenue from OxyContin.” 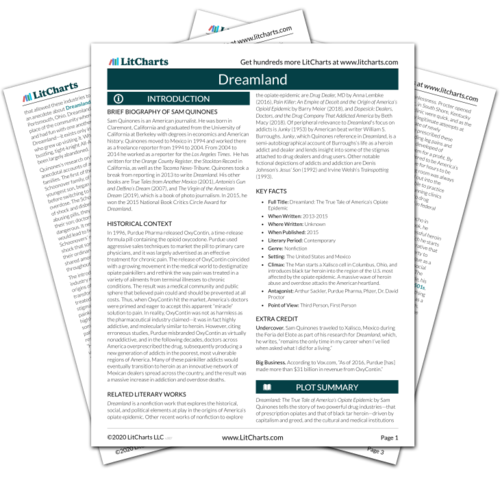 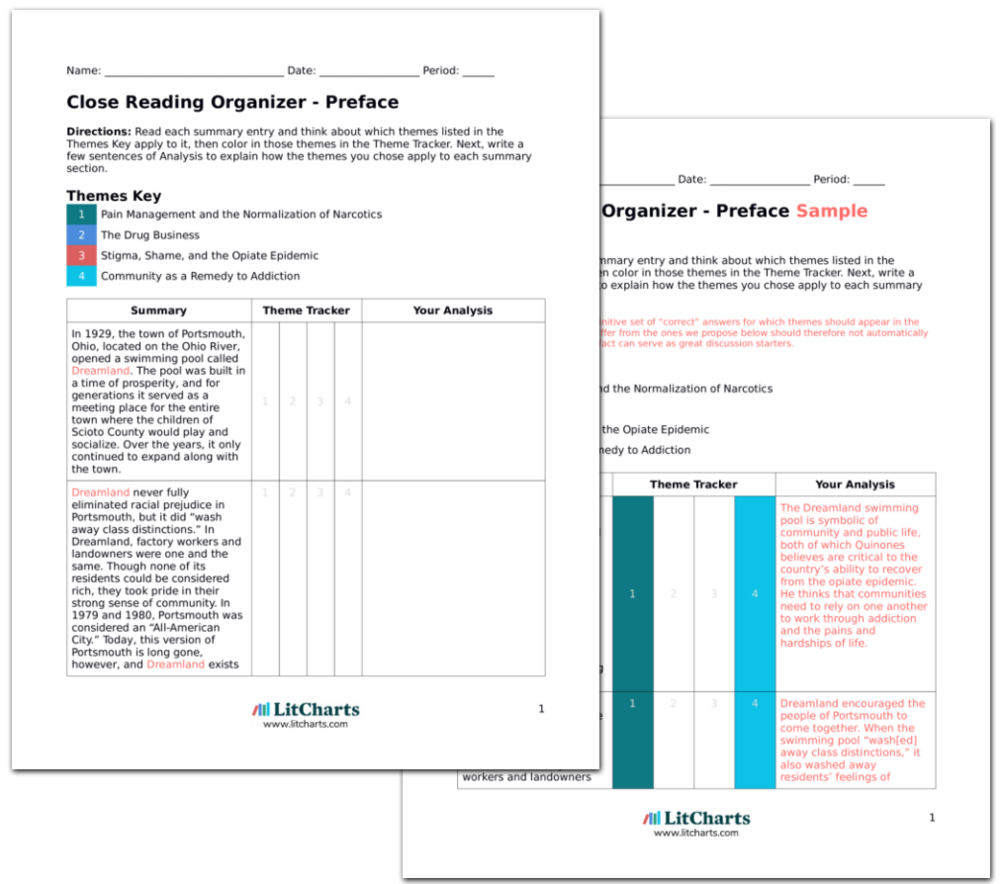