Download this LitChart! (PDF)
Teachers and parents! Struggling with distance learning? Our Teacher Edition on Fathers and Sons can help.

Welcome to the LitCharts study guide on Ivan Turgenev's Fathers and Sons. Created by the original team behind SparkNotes, LitCharts are the world's best literature guides.

A concise biography of Ivan Turgenev plus historical and literary context for Fathers and Sons.

A quick-reference summary: Fathers and Sons on a single page.

In-depth summary and analysis of every chapter of Fathers and Sons. Visual theme-tracking, too.

Explanations, analysis, and visualizations of Fathers and Sons's themes.

Description, analysis, and timelines for Fathers and Sons's characters.

Description, analysis, and timelines for Fathers and Sons's terms.

Explanations of Fathers and Sons's symbols, and tracking of where they appear.

An interactive data visualization of Fathers and Sons's plot and themes.

Turgenev was born into the Russian noble class, to a poor cavalry officer and an heiress of a massive estate with 5,000 serfs. Though he grew up in luxury, his mother was authoritarian and sometimes cruel. He nevertheless developed a love of nature and an affection for peasant stories and lifestyles. Having grown up with international governesses, Turgenev was an avid “Westernizer” who studied in Berlin after his time at Petersburg University; he became a particularly enthusiastic student of German idealist philosopher G. W. F. Hegel. Turgenev believed that Russia would be best served by incorporating European Enlightenment ideals, and he strongly opposed the system of serfdom. He never married, but he had a lifelong affair with a French opera singer named Pauline Viardot, and he fathered an illegitimate daughter with one of his family’s serfs. He has been described as the “un-Russian Russian” by some critics, the first Russian novelist to become broadly popular in Europe. Fathers and Sons was his masterpiece. While some were shocked by the mere depiction of Nihilism in the novel, others found the character of the nihilist Bazarov to be a libelous caricature. Unprepared for the outbreak of criticism, Turgenev considered giving up writing altogether. However, he authored a variety of novels, short fiction, including the ambitious novel Virgin Soil, the short story collection Sportsman’s Sketches, and the play A Month in the Country.
Get the entire Fathers and Sons LitChart as a printable PDF.
"My students can't get enough of your charts and their results have gone through the roof." -Graham S.
Download 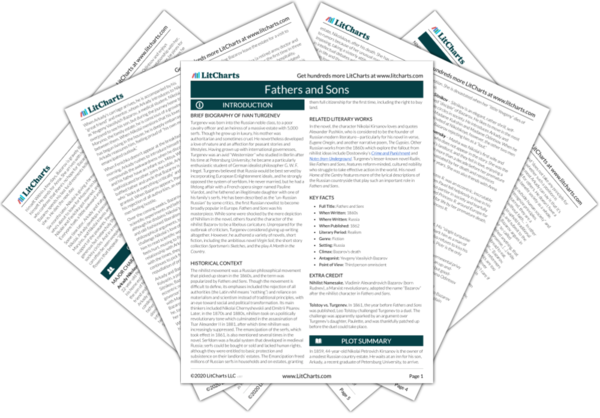 Historical Context of Fathers and Sons

The nihilist movement was a Russian philosophical movement that picked up steam in the 1860s, and the term was popularized by Fathers and Sons. Though the movement is difficult to define, its emphases included the rejection of all authorities (the Latin nihil means “nothing”) and reliance on materialism and scientism instead of traditional principles, with an eye toward social and political transformation. Its main thinkers included Nikolai Chernyshevskii and Dmitrii Pisarev. Later, in the 1870s and 1880s, nihilism took on a politically revolutionary tone which culminated in the assassination of Tsar Alexander II in 1881, after which time nihilism was increasingly suppressed. The emancipation of the serfs, which took effect in 1861, is also mentioned several times in the novel. Serfdom was a feudal system that developed in medieval Russia; serfs could be bought or sold and lacked human rights, although they were entitled to basic protection and subsistence on their landlords’ estates. The Emancipation freed millions of Russian serfs in households and on estates, granting them full citizenship for the first time, including the right to buy land.

Other Books Related to Fathers and Sons

In the novel, the character Nikolai Kirsanov loves and quotes Alexander Pushkin, who is considered to be the founder of Russian modern literature—particularly for his novel in verse, Eugene Onegin, and another narrative poem, The Gypsies. Other Russian works from the 1860s which explore the fallout from nihilist ideas include Dostoevsky’s Crime and Punishment and Notes from Underground. Turgenev’s lesser-known novel Rudin, like Fathers and Sons, features reform-minded, cultured nobility who struggle to take effective action in the world. His novel Home of the Gentry features more of the lyrical descriptions of the Russian countryside that play such an important role in Fathers and Sons.
Key Facts about Fathers and Sons

Extra Credit for Fathers and Sons

Tolstoy vs. Turgenev. In 1861, the year before Fathers and Sons was published, Leo Tolstoy challenged Turgenev to a duel. The challenge was apparently sparked by an argument over Turgenev’s daughter, Paulette, and was thankfully patched up before the duel could take place. 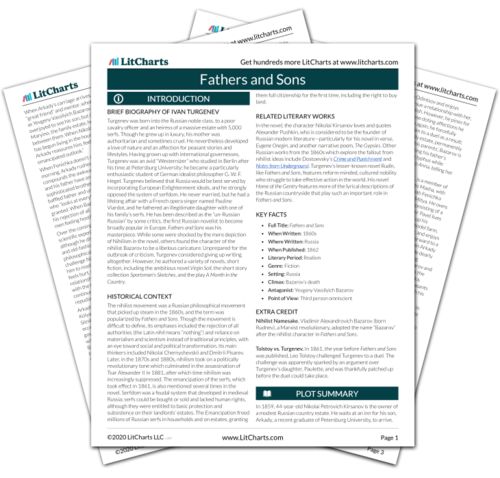 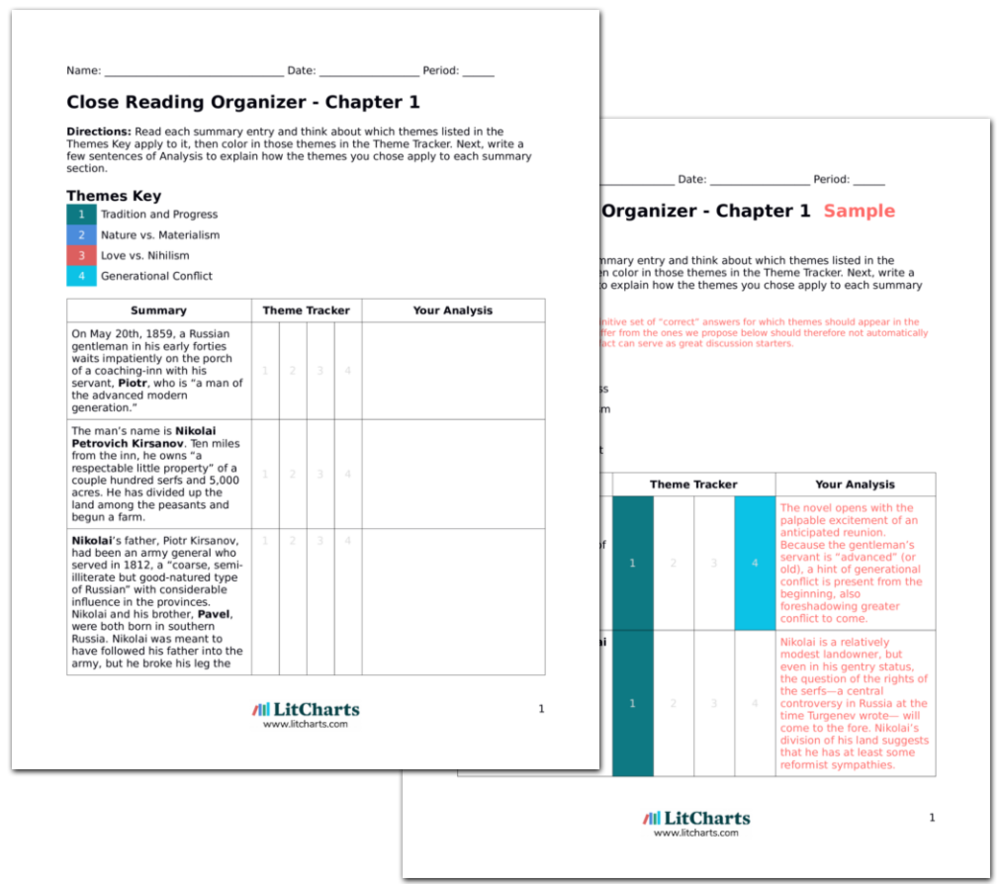