Download this LitChart! (PDF)
Teachers and parents! Struggling with distance learning? Our Teacher Edition on Fefu and Her Friends can help.

Welcome to the LitCharts study guide on María Irene Fornés's Fefu and Her Friends. Created by the original team behind SparkNotes, LitCharts are the world's best literature guides.

Fefu and Her Friends: Introduction

A concise biography of María Irene Fornés plus historical and literary context for Fefu and Her Friends.

Fefu and Her Friends: Plot Summary

A quick-reference summary: Fefu and Her Friends on a single page.

In-depth summary and analysis of every part of Fefu and Her Friends. Visual theme-tracking, too.

Fefu and Her Friends: Themes

Explanations, analysis, and visualizations of Fefu and Her Friends's themes.

Fefu and Her Friends: Quotes

Fefu and Her Friends's important quotes, sortable by theme, character, or part.

Fefu and Her Friends: Characters

Description, analysis, and timelines for Fefu and Her Friends's characters.

Fefu and Her Friends: Symbols

Explanations of Fefu and Her Friends's symbols, and tracking of where they appear.

Fefu and Her Friends: Theme Wheel

An interactive data visualization of Fefu and Her Friends's plot and themes.

Born in Havana, Cuba in 1930, María Irene Fornés was the youngest of six siblings. She and her family immigrated to the United States in 1945 following the death of her father. She worked as a teenager in a shoe factory before pursuing an education in painting and abstract art, studying with the famous painter and teacher Hans Hoffman. While working as a visual artist, Fornés met the model and writer Harriet Sohmers, with whom she developed a romantic relationship. Fornés moved to Paris to live with Sohmers in 1954. Inspired by a production of Samuel Beckett’s Waiting for Godot, she took an interest in theater and eventually started writing plays of her own in the 1960s. She was especially inspired to start writing after she met the author Susan Sontag in 1959. The two women became romantic and were in a relationship for several years. Fornés’s first play, There! You Died, premiered in San Francisco in 1963 and was renamed Tango Palace when it was staged a year later in New York City at the Actors Studio. Two years later, she won an Obie Award for her play Promenade and had, by then, firmly established her reputation as an influential playwright of abstract, experimental theater. She built on this reputation with her 1977 play Fefu and Her Friends, which deconstructed conventional methods of staging. She explored issues surrounding feminism and gender dynamics throughout her career, writing more than 40 plays and winning many prestigious awards.
Get the entire Fefu and Her Friends LitChart as a printable PDF.
"My students can't get enough of your charts and their results have gone through the roof." -Graham S.
Download 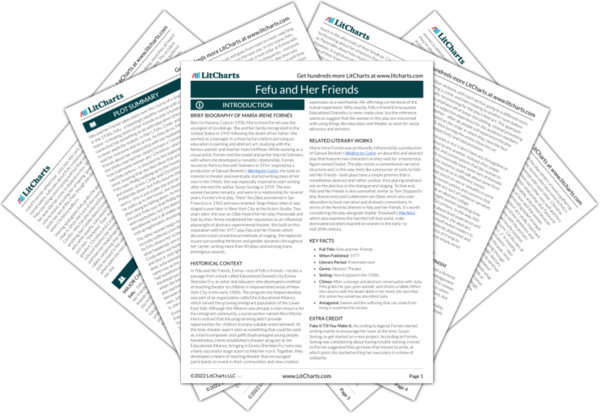 Historical Context of Fefu and Her Friends

In Fefu and Her Friends, Emma—one of Fefu’s friends—recites a passage from a book called Educational Dramatics by Emma Sheridan Fry, an actor and educator who developed a method of teaching theater to children in impoverished areas of New York City in the early 1900s. The program she helped develop was part of an organization called the Educational Alliance, which served the growing immigrant population of the Lower East Side. Although the Alliance was already a vital resource for the immigrant community, a social worker named Alice Minnie Herts noticed that the programming didn’t provide opportunities for children to enjoy suitable entertainment. At the time, theater wasn’t seen as something that could be used as a tool to empower and uplift disadvantaged young people. Nonetheless, Herts established a theater program at the Educational Alliance, bringing in Emma Sheridan Fry (who was a fairly successful stage actor) to help her run it. Together, they developed a means of teaching theater that encouraged participants to invest in their communities and view creative expression as a worthwhile, life-affirming cornerstone of the human experience. Why, exactly, Fefu’s friend Emma quotes Educational Dramatics is never made clear, but the reference seems to suggest that the women in this play are concerned with using things like education and theater as tools for social advocacy and activism.

Other Books Related to Fefu and Her Friends

María Irene Fornés was profoundly influenced by a production of Samuel Beckett’s Waiting for Godot, an absurdist and abstract play that features two characters as they wait for a mysterious figure named Godot. The play resists a conventional narrative structure and, in this way, feels like a precursor of sorts to Fefu and Her Friends—both plays have a simple premise that is nonetheless abstract and rather unclear, thus placing emphasis not on the plot but on the dialogue and staging. To that end, Fefu and Her Friends is also somewhat similar to Tom Stoppard’s play Rosencrantz and Guildenstern are Dead, which also uses absurdism to buck narrative and dramatic conventions. In terms of the feminist themes in Fefu and Her Friends, it’s worth considering the play alongside Sophie Treadwell’s Machinal, which also examines the harmful toll that sexist, male-dominated societies exacted on women in the early- to mid-20th century.
Key Facts about Fefu and Her Friends

Extra Credit for Fefu and Her Friends

Fake It Till You Make It. According to legend, Fornés started writing mainly to encourage her lover at the time, Susan Sontag, to get started on a new project. According to Fornés, Sontag was complaining about having trouble starting a novel, so Fornés suggested they go home that instant to write, at which point she started writing her own piece in a show of solidarity. 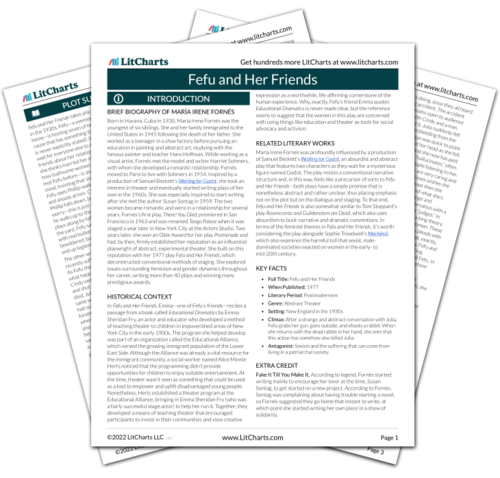 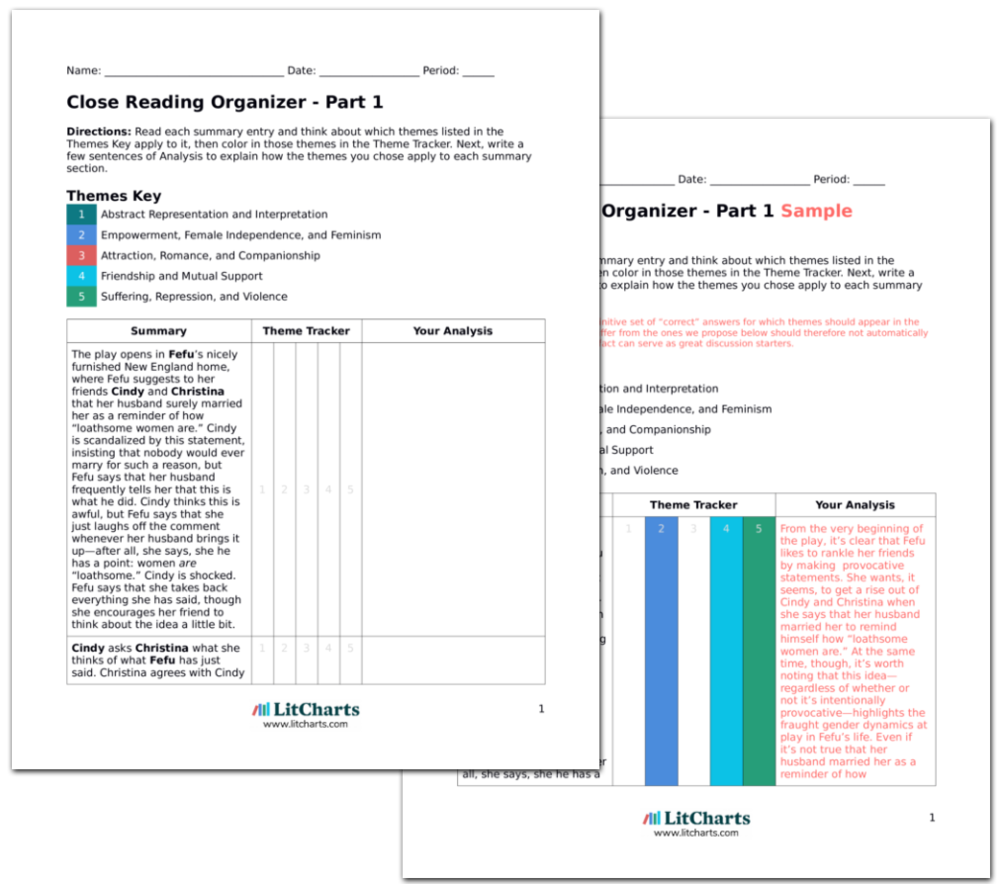