Download this LitChart! (PDF)
Teachers and parents! Struggling with distance learning? Our Teacher Edition on Gates of Fire can help.

Welcome to the LitCharts study guide on Steven Pressfield's Gates of Fire. Created by the original team behind SparkNotes, LitCharts are the world's best literature guides.

A concise biography of Steven Pressfield plus historical and literary context for Gates of Fire.

A quick-reference summary: Gates of Fire on a single page.

In-depth summary and analysis of every chapter of Gates of Fire. Visual theme-tracking, too.

Explanations, analysis, and visualizations of Gates of Fire's themes.

Description, analysis, and timelines for Gates of Fire's characters.

Description, analysis, and timelines for Gates of Fire's terms.

Explanations of Gates of Fire's symbols, and tracking of where they appear.

An interactive data visualization of Gates of Fire's plot and themes.

Steven Pressfield was born in Trinidad while his father was stationed there in the Navy. He graduated from Duke University in 1965 and joined the Marine Corps in 1966. Before becoming a full-time writer, he held a variety of jobs, including teaching, truck driving, and working on an oil rig. He finally published his first book, The Legend of Bagger Vance, in 1995; it was made into a film in 2000. Other successful titles include Tides of War, a novel about the Peloponnesian War, and The War of Art, a nonfiction book on writing. He has also written a number of other screenplays which have been made into Hollywood films and has appeared as a commentator on the History Channel.
Get the entire Gates of Fire LitChart as a printable PDF.
"My students can't get enough of your charts and their results have gone through the roof." -Graham S.
Download 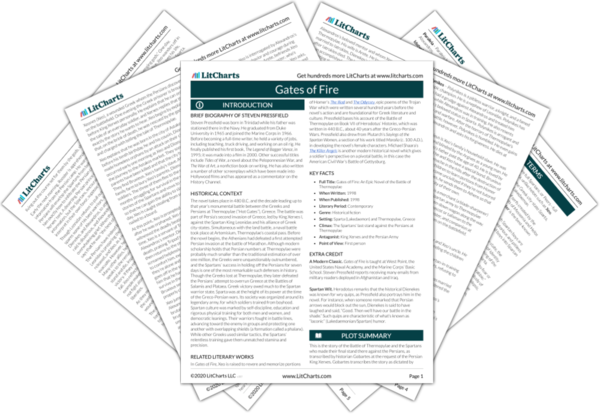 Historical Context of Gates of Fire

The novel takes place in 480 B.C. and the decade leading up to that year’s monumental battle between the Greeks and Persians at Thermopylae (“Hot Gates”), Greece. The battle was part of Persia’s second invasion of Greece, led by King Xerxes I, against the Spartan King Leonidas and his alliance of Greek city-states. Simultaneous with the land battle, a naval battle took place at Artemisium, Thermopylae’s coastal pass. Before the novel begins, the Athenians had defeated a first attempted Persian invasion at the battle of Marathon. Although modern scholarship holds that Persian numbers at Thermopylae were probably much smaller than the traditional estimation of over one million, the Greeks were unquestionably outnumbered, and the Spartans’ success in holding off the Persians for seven days is one of the most remarkable such defenses in history. Though the Greeks lost at Thermopylae, they later defeated the Persians’ attempt to overrun Greece at the Battles of Salamis and Plataea. Greek victory owed much to the Spartan warrior state. Sparta was at the height of its power at the time of the Greco-Persian wars. Its society was organized around its legendary army, for which soldiers trained from boyhood. Spartan culture was marked by self-discipline, education and rigorous physical training for both men and women, and democratic leanings. Their warriors fought in battle lines, advancing toward the enemy in groups and protecting one another with overlapping shields (a formation called a phalanx). While other Greeks used similar tactics, the Spartans’ relentless training gave them unmatched stamina and precision.

Other Books Related to Gates of Fire

In Gates of Fire, Xeo is raised to revere and memorize portions of Homer’s The Iliad and The Odyssey, epic poems of the Trojan War which were written several hundred years before the novel’s action and are foundational for Greek literature and culture. Pressfield bases his account of the Battle of Thermopylae on Book VII of Herodotus’ Histories, which was written in 440 B.C., about 40 years after the Greco-Persian Wars. Pressfield also drew from Plutarch’s Sayings of the Spartan Women, a section of his work titled Moralia (c. 100 A.D.), in developing the novel’s female characters. Michael Shaara’s The Killer Angels is another modern historical novel which gives a soldier’s perspective on a pivotal battle, in this case the American Civil War’s Battle of Gettysburg.
Key Facts about Gates of Fire

Extra Credit for Gates of Fire

A Modern Classic. Gates of Fire is taught at West Point, the United States Naval Academy, and the Marine Corps’ Basic School. Steven Pressfield reports receiving many emails from military readers deployed in Afghanistan and Iraq.

Spartan Wit. Herodotus remarks that the historical Dienekes was known for wry quips, as Pressfield also portrays him in the novel. For instance, when someone remarked that Persian arrows would block out the sun, Dienekes is said to have laughed and said, “Good. Then we’ll have our battle in the shade.” Such quips are characteristic of what’s known as “laconic” (Lakedaemonian/Spartan) humor.