Welcome to the LitCharts study guide on Robert Cormier's Heroes. Created by the original team behind SparkNotes, LitCharts are the world's best literature guides.

A concise biography of Robert Cormier plus historical and literary context for Heroes.

A quick-reference summary: Heroes on a single page.

In-depth summary and analysis of every chapter of Heroes. Visual theme-tracking, too.

Explanations of Heroes's symbols, and tracking of where they appear.

An interactive data visualization of Heroes's plot and themes.

Cormier was born into a working-class family in the French Canadian quarter of Leominster, Massachusetts. His family moved frequently in order to afford their rent, but they never left the town. In the 7th grade, Cormier realized his ambition was to become a writer; he graduated from high school as class president and attended Fitchburg State College. Cormier soon began a successful career as a journalist and a writer of young adult fiction. His fiction has won him numerous prizes over his lifetime. He passed away in 2000 due to complications from a blood clot.
Get the entire Heroes LitChart as a printable PDF.
"My students can't get enough of your charts and their results have gone through the roof." -Graham S.
Download 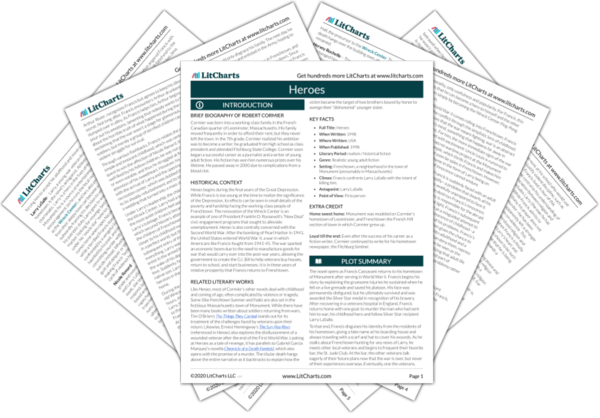 Heroes begins during the final years of the Great Depression. While Francis is too young at the time to realize the significance of the Depression, its effects can be seen in small details of the poverty and hardship facing the working-class people of Frenchtown. The renovation of the Wreck Center is an example of one of President Franklin D. Roosevelt’s “New Deal” civic engagement programs that sought to alleviate unemployment. Heroes is also centrally concerned with the Second World War. After the bombing of Pearl Harbor in 1941, the United States entered World War II, a war in which Americans like Francis fought from 1941-45. The war sparked an economic boom due to the need to manufacture goods for war that would carry over into the post-war years, allowing the government to create the G.I. Bill to help veterans buy houses, return to school, and start businesses. It is in these years of relative prosperity that Francis returns to Frenchtown.

Other Books Related to Heroes

Like Heroes, most of Cormier’s other novels deal with childhood and coming of age, often complicated by violence or tragedy. Some (like Frenchtown Summer and Fade) are also set in the fictitious Massachusetts town of Monument. While there have been many books written about soldiers returning from wars, Tim O’Brien’s The Things They Carried stands out for its treatment of the challenges faced by veterans upon their return. Likewise, Ernest Hemingway’s The Sun Also Rises (referenced in Heroes) also explores the disillusionment of a wounded veteran after the end of the First World War. Looking at Heroes as a tale of revenge, it has parallels to Gabriel Garcia Marquez’s novella Chronicle of a Death Foretold, which also opens with the promise of a murder. The titular death hangs above the entire narrative as it backtracks to explain how the victim became the target of two brothers bound by honor to avenge their “dishonored” younger sister.
Key Facts about Heroes

Home sweet home: Monument was modeled on Cormier’s hometown of Leominster, and Frenchtown the French Hill section of town in which Cormier grew up.

Loyal till the end: Even after the success of his career as a fiction writer, Cormier continued to write for his hometown newspaper, the Fitchburg Sentinel.