Download this LitChart! (PDF)
Teachers and parents! Struggling with distance learning? Our Teacher Edition on Hop-Frog can help.

Welcome to the LitCharts study guide on Edgar Allan Poe's Hop-Frog. Created by the original team behind SparkNotes, LitCharts are the world's best literature guides.

A concise biography of Edgar Allan Poe plus historical and literary context for Hop-Frog.

A quick-reference summary: Hop-Frog on a single page.

In-depth summary and analysis of every of Hop-Frog. Visual theme-tracking, too.

Explanations of Hop-Frog's symbols, and tracking of where they appear.

An interactive data visualization of Hop-Frog's plot and themes.

Edgar Allan Poe was the second child of Elizabeth Arnold Hopkins and David Poe, two traveling stage actors. His early life was tragic; Poe’s father abandoned his family in 1810, and his mother died of tuberculosis a year later. The young Edgar was taken into the home of John Allan, a successful Virginia merchant who funded his education. Poe’s relationship with Allan, his foster father, was alternately tumultuous and amicable; though he quarreled with Allan over his gambling debts in college, they later reconciled after the death of Frances Allan, John’s wife. Poe’s early writing was influenced by his brother, William Henry, who was an amateur poet. Poe began to publish his writings in 1827, but did not seriously pursue writing until 1831, when his brother died of tuberculosis and Poe was discharged from the military. Poe quickly gained recognition as a discriminating critic, and his short fiction and poetry were also modestly successful. Despite this, he struggled financially, as it was quite difficult to make a living through writing during this period. Poe died in 1849 under mysterious circumstances, which have been variously explained as disease, suicide, and murder. His posthumous influence was far-reaching; he is now regarded as the foremost writer of American romanticism, and his early translations into French had a profound impact on continental writing, too.
Get the entire Hop-Frog LitChart as a printable PDF.
"My students can't get enough of your charts and their results have gone through the roof." -Graham S.
Download 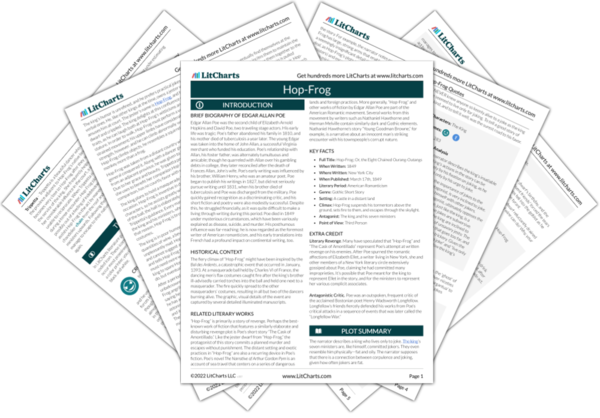 The fiery climax of “Hop-Frog” might have been inspired by the Bal des Ardents, a catastrophic event that occurred in January, 1393. At a masquerade ball held by Charles VI of France, the dancing men’s flax costumes caught fire after the king’s brother ill-advisedly carried torches into the ball and held one next to a masquerader. The fire quickly spread to the other masqueraders’ costumes, resulting in all but two of the dancers burning alive. The graphic, visual details of the event are captured by several detailed illuminated manuscripts.

Other Books Related to Hop-Frog

“Hop-Frog” is primarily a story of revenge. Perhaps the best-known work of fiction that features a similarly elaborate and disturbing revenge plot is Poe’s short story “The Cask of Amontillado.” Like the jester dwarf from “Hop-Frog,” the protagonist of this story commits a planned murder and escapes without punishment. The distant setting and exotic practices in “Hop-Frog” are also a recurring device in Poe’s fiction. Poe’s novel The Narrative of Arthur Gordon Pym is an account of sea travel that centers on a series of dangerous lands and foreign practices. More generally, “Hop-Frog” and other works of fiction by Edgar Allan Poe are part of the American Romantic movement. Several works from this movement by writers such as Nathaniel Hawthorne and Herman Melville contain similarly dark and Gothic elements. Nathaniel Hawthorne’s story “Young Goodman Browne,” for example, is a narrative about an innocent man’s striking encounter with his townspeople’s corrupt nature.
Key Facts about Hop-Frog

Literary Revenge. Many have speculated that “Hop-Frog” and “The Cask of Amontillado” represent Poe’s attempt at written revenge on his enemies. After Poe spurned the romantic affections of Elizabeth Ellet, a writer living in New York, she and other members of a New York literary circle extensively gossiped about Poe, claiming he had committed many improprieties. It’s possible that Poe meant for the king to represent Ellet in the story, and for the ministers to represent her various complicit associates.

Antagonistic Critic. Poe was an outspoken, frequent critic of the acclaimed Bostonian poet Henry Wadsworth Longfellow. Longfellow’s friends fiercely defended his works from Poe’s critical attacks in a sequence of events that was later called the “Longfellow War.” 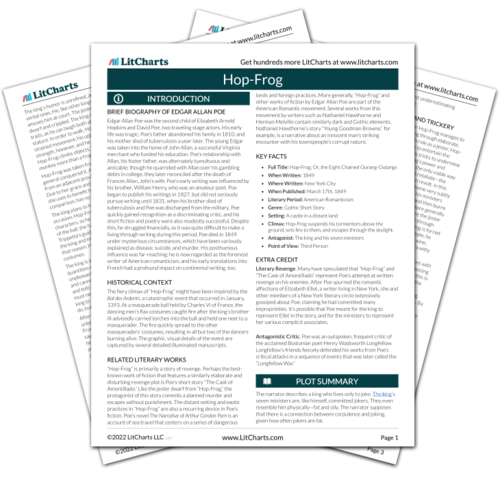 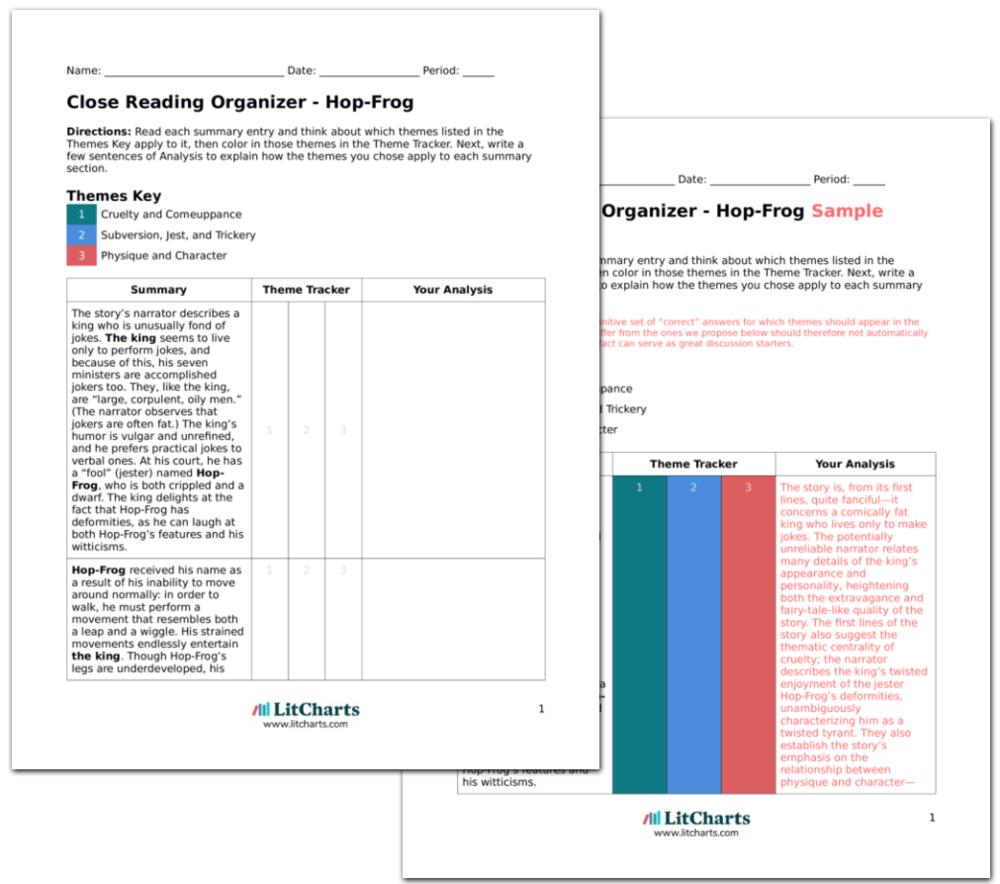