Download this LitChart! (PDF)
Teachers and parents! Struggling with distance learning? Our Teacher Edition on If Beale Street Could Talk can help.

Welcome to the LitCharts study guide on James Baldwin's If Beale Street Could Talk. Created by the original team behind SparkNotes, LitCharts are the world's best literature guides.

If Beale Street Could Talk: Introduction

A concise biography of James Baldwin plus historical and literary context for If Beale Street Could Talk.

A quick-reference summary: If Beale Street Could Talk on a single page.

In-depth summary and analysis of every chapter of If Beale Street Could Talk. Visual theme-tracking, too.

If Beale Street Could Talk: Themes

Explanations, analysis, and visualizations of If Beale Street Could Talk's themes.

If Beale Street Could Talk: Quotes

If Beale Street Could Talk's important quotes, sortable by theme, character, or chapter.

If Beale Street Could Talk: Characters

Description, analysis, and timelines for If Beale Street Could Talk's characters.

If Beale Street Could Talk: Symbols

Explanations of If Beale Street Could Talk's symbols, and tracking of where they appear.

An interactive data visualization of If Beale Street Could Talk's plot and themes.

James Baldwin was born in Harlem in 1924, the grandson of a slave and the eldest of nine children. Though his biological father was absent, a Baptist minister named David Baldwin soon became the young author’s stepfather. Over the years, Baldwin’s relationship with David would prove tenuous yet formative, since his eventual experience as a Youth Minister in an opposing church was both a result and defiance of his stepfather’s example as a Baptist preacher. In retrospect, Baldwin identified his time in the church—preparing and delivering several sermons per week—as an important step in his development as a writer, since in this role he was forced to closely consider a wide range of human emotions. He calls upon this experience in his most celebrated novel, Go Tell It on the Mountain, as well as in the play The Amen Corner. Upon graduating high school, Baldwin spent the majority of his time in Greenwich Village—at that time a hotbed of creativity and progressive thinking—working as a book reviewer. Around this time, the famous novelist Richard Wright identified Baldwin’s talent and helped him earn a grant in order to work on a novel and sustain himself while doing so. Baldwin moved to Paris in 1948 with the hopes of both physically and psychologically distancing himself from America so that he could write about his country more clearly. The result came in 1953, when he published Go Tell It on the Mountain. Baldwin returned to America in 1957, at which point he became involved with the Civil Rights Movement. This was the beginning of his celebrated career as an outspoken activist and socially-conscious public thinker, advocating for peaceful resolutions of America’s racial tensions. Baldwin worked for the last ten years of his life in France, penning a number of essential works about American identity in the wake of the assassinations of Medgar Evers—a civil rights activist—and Martin Luther King, Jr. He died of stomach cancer in 1987 in Saint Paul de Vence, France.
Get the entire If Beale Street Could Talk LitChart as a printable PDF.
"My students can't get enough of your charts and their results have gone through the roof." -Graham S.
Download 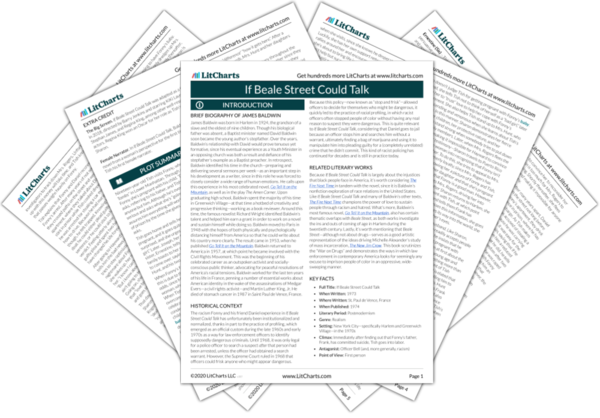 Historical Context of If Beale Street Could Talk

The racism Fonny and his friend Daniel experience in If Beale Street Could Talk has unfortunately been institutionalized and normalized, thanks in part to the practice of profiling, which emerged as an official custom during the late 1960s and early 1970s as a way for law enforcement officers to identify supposedly dangerous criminals. Until 1968, it was only legal for a police officer to search a suspect after that person had been arrested, unless the officer had obtained a search warrant. However, the Supreme Court ruled in 1968 that officers could frisk anyone who might appear dangerous. Because this policy—now known as “stop and frisk”—allowed officers to decide for themselves who might be dangerous, it quickly led to the practice of racial profiling, in which racist officers often stopped people of color without having any real reason to suspect they were dangerous. This is quite relevant to If Beale Street Could Talk, considering that Daniel goes to jail because an officer stops him and searches him without a warrant, ultimately finding a bag of marijuana and using it to manipulate him into pleading guilty for a (completely unrelated) crime that he didn’t commit. This kind of racist policing has continued for decades and is still in practice today.

Other Books Related to If Beale Street Could Talk

Because If Beale Street Could Talk is largely about the injustices that black people face in America, it’s worth considering The Fire Next Time in tandem with the novel, since it is Baldwin’s nonfiction exploration of race relations in the United States. Like If Beale Street Could Talk and many of Baldwin’s other texts, The Fire Next Time champions the power of love to sustain people through racism and hatred. What’s more, Baldwin’s most famous novel, Go Tell It on the Mountain, also has certain thematic overlaps with Beale Street, as both works investigate the ins and outs of coming of age in Harlem during the twentieth century. Lastly, it’s worth mentioning that Beale Street—although not about drugs—serves as a good artistic representation of the ideas driving Michelle Alexander’s study of mass incarceration, The New Jim Crow. This book scrutinizes the “War on Drugs” and demonstrates the ways in which law enforcement in contemporary America looks for seemingly any excuse to imprison people of color in an oppressive, wide-sweeping manner.
Key Facts about If Beale Street Could Talk

Extra Credit for If Beale Street Could Talk

The Big Screen. If Beale Street Could Talk was adapted as a film in 2018, directed by Barry Jenkins and starring KiKi Layne, Stephan James, and Regina King, among other well-respected actors. Regina King won an Oscar for her role as Tish’s mother, Sharon.

Female Narrator. In If Beale Street Could Talk, Baldwin writes a novel from a woman’s perspective for the first time, making Tish his first female narrator. 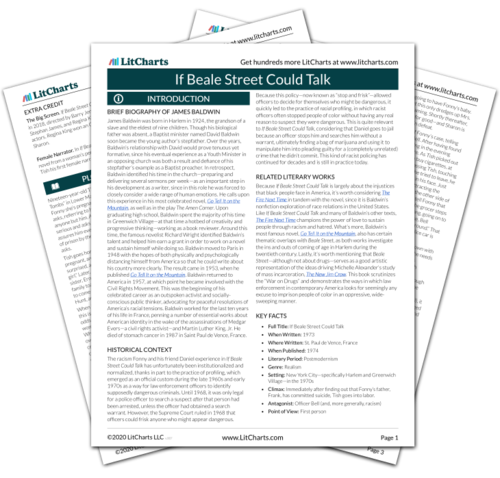 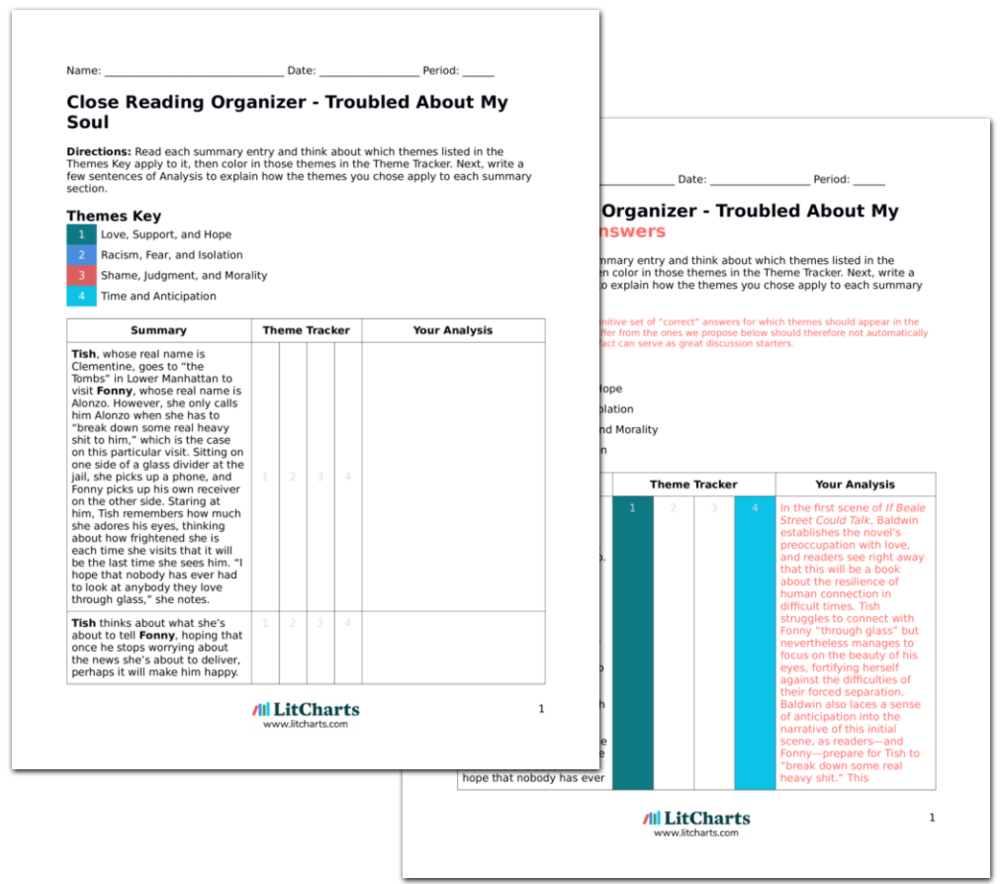