Get LitCharts A+
LitCharts assigns a color and icon to each theme in James and the Giant Peach, which you can use to track the themes throughout the work.

James and the Giant Peach is a fundamentally silly book—it’s absurd, nonsensical, and brimming with poems and songs that beg to be recited out loud. By plunging readers into a world that offers few or no explanations as to how or why it works, Dahl encourages readers of the novel to go with the flow and simply enjoy the story and the experience of reading it. Through this, Dahl suggests that it’s not worth it to try to ascribe logic or sense to the story—or indeed, to life itself. Life, the book implies, is fundamentally nonsensical and should be enjoyed for what it is.

The novel portrays adults as people who are fundamentally absurd. This is especially true when it comes to James’s Aunt Sponge and Aunt Spiker, who take him in upon his parents’ death. The women’s bodies are described as being almost too strange to be human: Aunt Sponge is “like a great white soggy overboiled cabbage,” while Aunt Spiker is “only bones and skin.” But even the strange old man who appears in the garden one day looks odd to James. James is only seven years old, so it’s possible that adult bodies on the whole just look strange to him. His perspective as a child means that things that may be normal for adults (such as having a body type that deviates from the norm or, in the case of the old man, having facial hair with an odd texture) is so outside of James’s experience as to seem absurd. But more broadly, Dahl suggests that James has the right idea. As a child, James doesn’t try to explain away or understand strange things, as an adult might. Instead, he accepts them as fact and moves on.

Beyond portraying adults as absurd, the novel also suggests that life itself is absurd and silly—and that this is exactly what makes life worth living. James’s happiest moments over the course of the novel take place as increasingly absurd things happen. He meets his new best friends—child-size garden bugs—in a sitting room hidden within the giant peach’s pit. And James only discovered them in there because, unlike his aunts who wanted only to profit off of the absurdly large peach in their garden, James wanted to explore it just for fun. In James’s case, embracing the absurdity of the giant peach saves him from his aunts. The peach not only flattens Aunt Spiker and Aunt Sponge when its stem breaks and the peach rolls down the hill; it ultimately carries James all the way to the United States, where he’s able to start a new life surrounded by people who care about him. James’s life is nonsensical—but that absurdity, silliness, and willingness to explore saves him from abuse and neglect.

Ultimately, the novel suggests that it’s less important why any of the events in James and the Giant Peach take place—what matters is that those events makes James’s life richer and happier, regardless of how or why they happen. Broadly speaking, the novel as a whole can be taken the same way. While the book is undeniably a rich tale that contains valuable lessons, one of its most important takeaways is that reading and stories should be fun and engaging. Within the world of James and the Giant Peach, absurdity and nonsense may have a dark side—James’s parents are eaten by a rhinoceros, after all—but that absurdity nevertheless works in service of humor and the reader’s enjoyment. It’s enough, the novel suggests, to take its story at face value, enjoy the experience of reading it, and make one’s own life richer in the process. 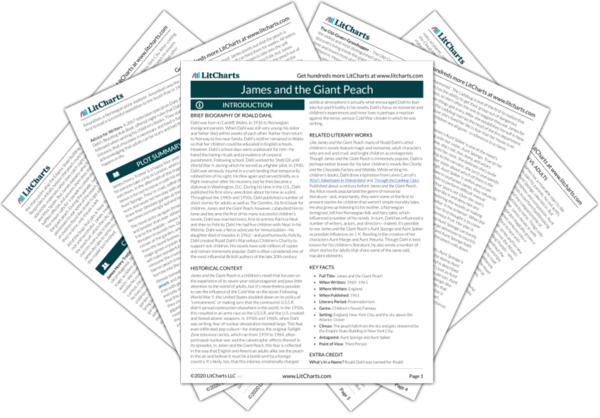 Fun, Nonsense, and Absurdity Quotes in James and the Giant Peach

Below you will find the important quotes in James and the Giant Peach related to the theme of Fun, Nonsense, and Absurdity.
Chapter 1 Quotes

And as time went on, he became sadder and sadder, and more and more lonely, and he used to spend hours every day standing at the bottom of the garden, gazing wistfully at the lovely but forbidden world of woods and fields and ocean that was spread out below him like a magic carpet.

“Oh, Auntie Sponge!” James cried out. “And Auntie Spiker! Couldn’t we all—please—just for once—go down to the seaside on the bus? It isn’t very far—and I feel so hot and awful and lonely...”

“It’s ripe!” she cried. “It’s just perfect! Now see here, Spiker. Why don’t we go and get us a shovel right away and dig out a great big hunk of it for you and me to eat?”

“But I can’t wait to eat some!” Aunt Sponge cried out. She was watering at the mouth now and thin trickle of spit was running down one side of her chin.

“My dear Sponge,” Aunt Spiker said slowly, winking at her sister and smiling a sly, thin-lipped smile. “There’s a pile of money to be made out of this if only we can handle it right. You wait and see.”

“There he goes again!” the Earthworm cried, speaking for the first time. “He simply cannot stop telling lies about his legs! He doesn’t have anything like a hundred of them! He’s only got forty-two! The trouble is that most people don’t bother to count them. They just take his word.”

James decided that he rather liked the Centipede. He was obviously a rascal, but what a change it was to hear somebody laughing once in a while. He had never heard Aunt Sponge or Aunt Spiker laughing aloud in all the time he had been with them.

They panicked. They both got in each other’s way. They began pushing and jostling, and each of them was thinking only about saving herself. Aunt Sponge, the fat one, tripped over a box that she’d brought along to keep the money in, and fell flat on her face. Aunt Spiker immediately tripped over Aunt Sponge and came down on top of her. They both lay on the ground, fighting and clawing and yelling and struggling frantically to get up again, but before they could do this, the mighty peach was upon them.

“For dinner on my birthday I shall tell you what I choose:
Hot noodles made from poodles on a slice of garden hose—
And a rather smelly jelly
Made of armadillo’s toes.
(The jelly is delicious, but you have to hold your nose.)”

“Action stations!” James shouted. “Jump to it! There’s not a moment to lose!” He was the captain now, and everyone knew it. They would do whatever he told them.

“That’s it!!” cried the Captain. “It’s a secret weapon! Holy cats! Send a message to the Queen at once! The country must be warned! And give me my telescope.”

“You’re joking,” James said. “Nobody could possibly have his ears on his legs.”

“You know what I think is ridiculous?” the Centipede said, grinning away as usual. “I don’t mean to be rude, but I think it is ridiculous to have ears on the sides of one’s head. It certainly looks ridiculous. You ought to take a peek in the mirror some day and see for yourself.”

“Those are skyscrapers! So this must be America! And that, my friends, means that we have crossed the Atlantic Ocean overnight!”

“Oh, I’ve always dreamed of going to America!” cried the Centipede. “I had a friend once who—“

“Be quiet!” said the Earthworm. Who cares about your friend? The thing we’ve got to think about now is how on earth are we going to get down to earth?”

And because so many of them were always begging him to tell and tell again the story of his adventures on the peach, he thought it would be nice if one day he sat down and wrote a book.

And that is what you have just finished reading. 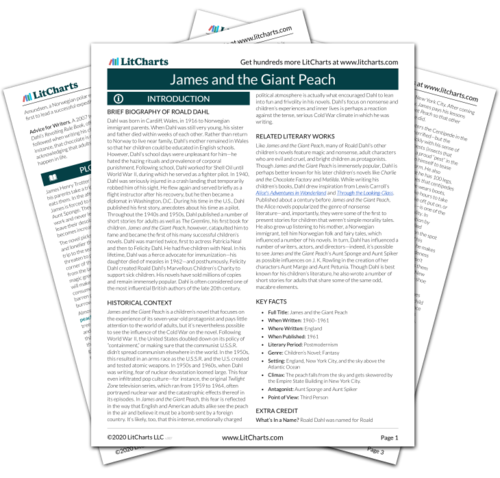 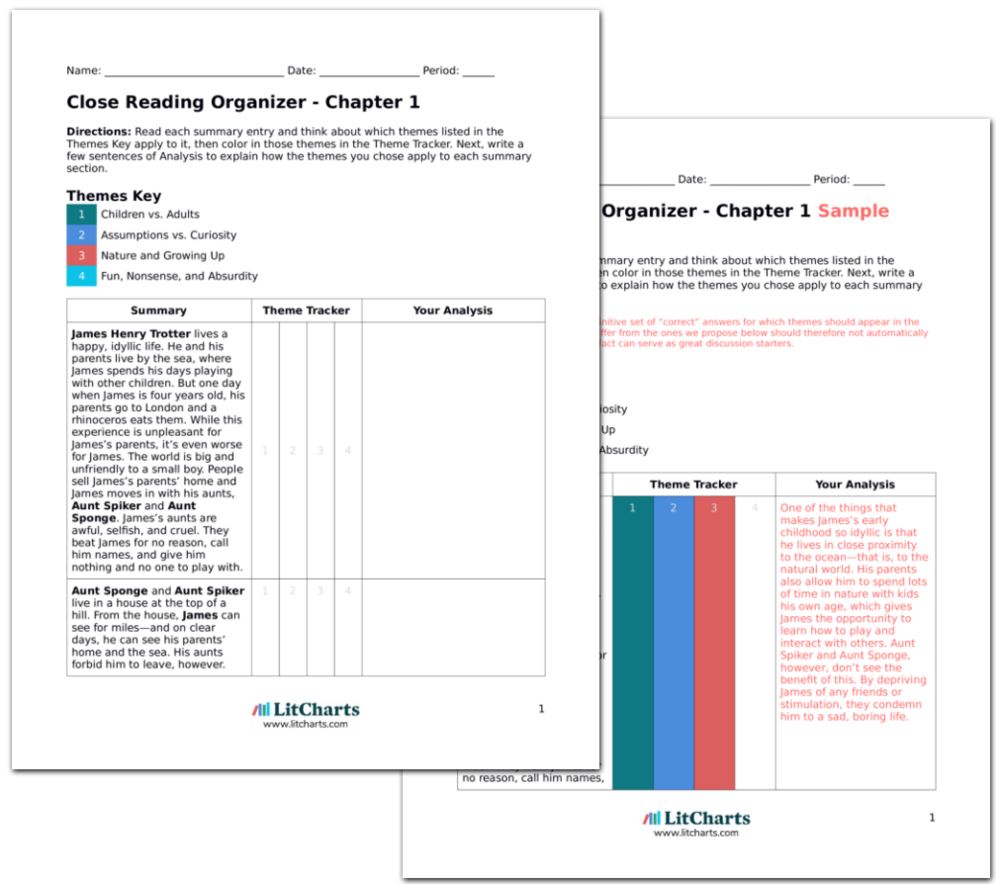