Life in the Iron Mills considers the power of positive words and actions to fix bad situations and change lives for the better. Ultimately, the novella asserts that words alone are an ineffective means for creating positive change—only the combination of positive words with positive actions has true power and authenticity.

Davis suggests that positive, encouraging words that aren’t backed by actions are empty and meaningless. Using Doctor May and the preacher as examples, the novella illustrates the way that words alone do little to fix negative situations. For example, Doctor May thinks highly of himself for speaking politely to Hugh—something he considers to be a powerful act of kindness. However, when Hugh accepts Doctor May’s encouraging words and asks Doctor May to help him, Doctor May quickly recoils, asserting that he doesn’t “have the means,” and that there is no point in him helping one person since he can’t help everyone. Doctor May’s kind words don’t change Hugh’s circumstances, they just make Doctor May feel good about himself. Likewise, when Hugh stumbles into a church, he finds the preacher’s words powerful yet foreign. Because the preacher has not experienced poverty, hunger, disease, or substance abuse, his sermon feels empty: “His words passed far over the furnace-tender’s grasp, toned to suit another class of culture; they sounded in his ears a very pleasant song in an unknown tongue.” The preacher’s words have “failed,” because they are not coupled with any sort of action or experience—they’re just hollow, pretty words.

In contrast, the novella praises those whose altruistic words and actions align—namely those who act on their convictions rather than just talk about them, like Deborah and the Quaker woman. Deborah cares for Hugh deeply and shows it both through her words and her actions; throughout the novella, she showers him with kind words and takes actions to support him, such as walking in the blistering cold every night to bring him dinner, stealing Mitchell’s pocketbook not just for herself but for Hugh as well, begging the jailer every day to be able to see Hugh, and convincing the Quaker woman to bury Hugh in the countryside rather than let him be “smothered” by the city. Deborah consistently acts on her love for Hugh, rather than just talking about it. Likewise, when Deborah pleads with the Quaker woman to bury Hugh in the countryside, the Quaker woman “put her strong arm around Deborah and led her to the window.” By putting her arm around Deborah, the Quaker woman acts, rather than just speaks, with love and kindness. The Quaker woman promises to help Deborah when she is released from prison in three years: “‘When thee comes back,’ she said, in a low, sorrowful tone, like one who speaks from a strong heart deeply moved with remorse or pity, ‘thee shall begin thy life again,—there on the hills. I came too late; but not for thee…’” When three years have passed, the Quaker woman acts on her promise by returning to get Deborah, showing her authenticity and commitment to altruism.

Life in the Iron Mills gives the spoken word very little power, asserting that positive words by themselves are insignificant if not paired with positive actions. Perhaps, this is partially because the novella centers on two inarticulate, uneducated protagonists—naturally, actions would have more clout than words. More importantly, the novella’s critique of empty words, and praise for words coupled with action, point to how social and political ills, like those detailed throughout the pages of Life in the Iron Mills, cannot be fixed by encouraging words, like those of Doctor May, or poetic sermons, like that of the preacher. Davis urges her privileged audience to actually take action in order to undo the evils of industrialization. Furthermore, Davis urges her audience to be like the Quaker woman and help heal those trapped in industrialization’s grasp.

The ThemeTracker below shows where, and to what degree, the theme of Words vs. Actions appears in each chapter of Life in the Iron Mills. Click or tap on any chapter to read its Summary & Analysis.
How often theme appears:
chapter length:
Chapter
Life in the Iron ...
Get the entire Life in the Iron Mills LitChart as a printable PDF.
"My students can't get enough of your charts and their results have gone through the roof." -Graham S.
Download 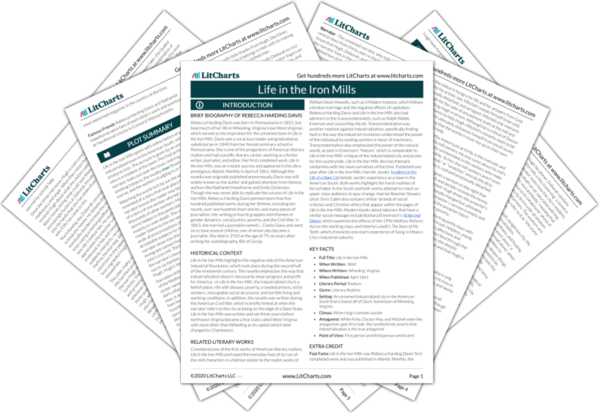 Words vs. Actions Quotes in Life in the Iron Mills

Something of a vague idea possessed the Doctor’s brain that much good was to be done here by a friendly word or two: a latent genius to be warmed into life by a waited-for sun-beam. Here it was: he had brought it…“Make yourself what you will. It is your right.”

…they sounded in his ears a very pleasant song in an unknown tongue. He meant to cure this world-cancer with a steady eye that had never glared with hunger, and a hand that neither poverty nor strychnine-whiskey had taught to shake. In this morbid, distorted heart of the Welsh puddler he had failed.