Like a House on Fire
Introduction + Context
Plot Summary
Detailed Summary & Analysis
Like A House on Fire
Themes
All Themes Humiliation and Masculinity Chaos vs. Order Intimacy, Communication, and Humor
Quotes
Characters
All Characters The narrator Claire Ben Sam Evie
Symbols
All Symbols A House on Fire The Christmas Nativity Scene

Download this LitChart! (PDF)
Teachers and parents! Struggling with distance learning? Our Teacher Edition on Like a House on Fire can help.

Welcome to the LitCharts study guide on Cate Kennedy's Like a House on Fire. Created by the original team behind SparkNotes, LitCharts are the world's best literature guides.

A concise biography of Cate Kennedy plus historical and literary context for Like a House on Fire.

A quick-reference summary: Like a House on Fire on a single page.

In-depth summary and analysis of every of Like a House on Fire. Visual theme-tracking, too.

Explanations, analysis, and visualizations of Like a House on Fire's themes.

Like a House on Fire's important quotes, sortable by theme, character, or .

Description, analysis, and timelines for Like a House on Fire's characters.

Explanations of Like a House on Fire's symbols, and tracking of where they appear.

An interactive data visualization of Like a House on Fire's plot and themes.

Kennedy was born in Lincolnshire, England, but moved to Australia during her childhood. As a teenager she won a short story prize in The Canberra Times, and she went on to study creative writing at university. She took a hiatus from writing after graduation, but began entering short story competitions again when she was in her thirties. Since then, she has published many fictional works—including her highly acclaimed short story collection Dark Roots (2006)—and been awarded numerous literary prizes. In 2010, for example, her novel The World Beneath won the People’s Choice Award at the NSW Premier’s Literary Awards, and she has won The Age Short Story competition twice. Kennedy’s memoir, Sing, and Don’t Cry (2005), charts her experiences traveling and working in rural Mexico. She has also published several poetry collections: Signs of Other Fires (2001), Joyflight (2004), and The Taste of River Water (2011). More recently, her short story anthology Like a House on Fire was shortlisted for the Stella Prize (2013) and won the Steele Rudd Award in the same year.
Get the entire Like a House on Fire LitChart as a printable PDF.
"My students can't get enough of your charts and their results have gone through the roof." -Graham S.
Download 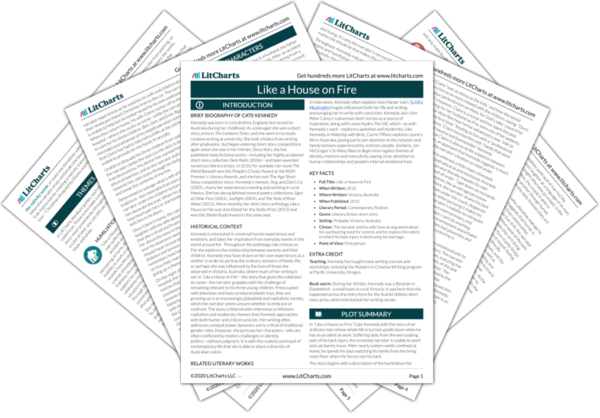 Kennedy is interested in universal human experiences and emotions, and takes her inspiration from everyday events in the world around her. Throughout the anthology Like a House on Fire she explores the relationship between parents and their children. Kennedy may have drawn on her own experiences as a mother in order to portray the ordinary tensions of family life, or perhaps she was influenced by the lives of those she observed in Victoria, Australia, where much of her writing is set. In “Like a House on Fire”—the story that gives the collection its name—the narrator grapples with the challenge of remaining relevant to his three young children. Preoccupied with television and mass-produced plastic toys, they are growing up in an increasingly globalized and capitalistic society, which the narrator seems unsure whether to embrace or confront. The story is littered with references to Western capitalism and modernity, themes that Kennedy approaches with both humor and critical cynicism. Her writing often addresses unequal power dynamics and is critical of traditional gender roles. However, she portrays her characters—who are often conflicted by modern challenges or identity politics—without judgment. It is with this realistic portrayal of contemporary life that she is able to share a diversity of Australian voices.

Other Books Related to Like a House on Fire

In interviews, Kennedy often explains how Harper Lee’s To Kill a Mockingbird hugely influenced both her life and writing, encouraging her to write with conviction. Kennedy also cites Peter Carey’s subversive short stories as a source of inspiration, along with Lewis Hyde’s The Gift, which—as with Kennedy’s work—explores capitalism and modernity. Like Kennedy, in Mateship with Birds, Carrie Tiffany explores country life in Australia, paying particular attention to the isolation and family tensions experienced by ordinary people. Similarly, Jon McGregor’s So Many Ways to Begin interrogates themes of identity, memory and masculinity, paying close attention to human relationships and people’s internal emotional lives.
Key Facts about Like a House on Fire

Teaching. Kennedy has taught many writing courses and workshops, including the Masters in Creative Writing program at Pacific University, Oregon.

Book worm. During her thirties, Kennedy was a librarian in Daylesford—a small town in rural Victoria. It was here that she happened across the entry form for the Scarlet Stiletto short story prize, which kickstarted her writing career. 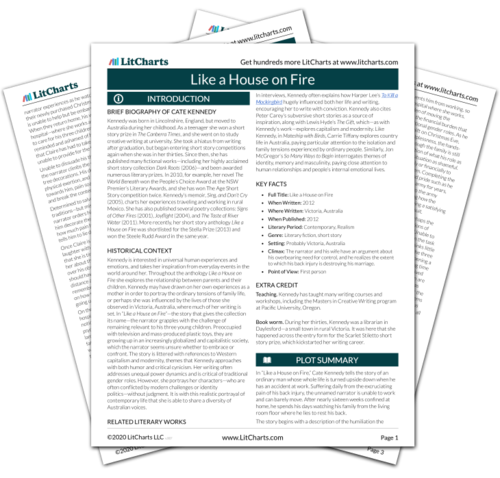 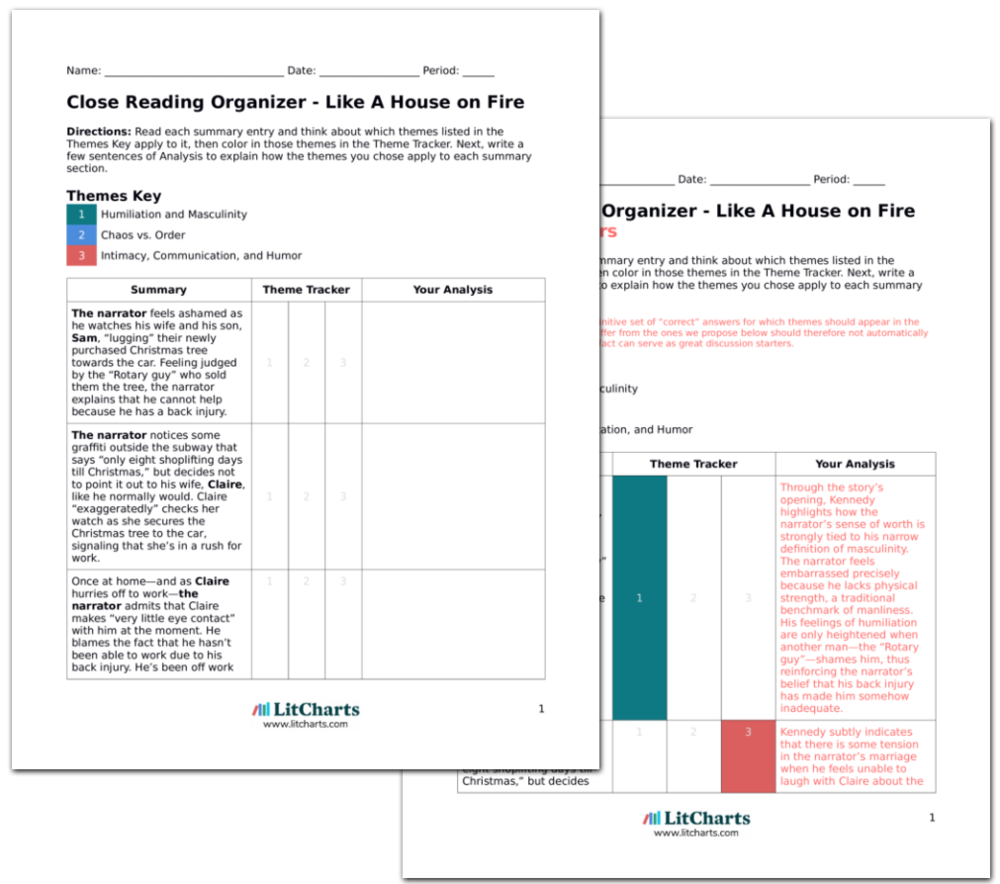