Download this LitChart! (PDF)
Teachers and parents! Struggling with distance learning? Our Teacher Edition on My Children! My Africa! can help.

Welcome to the LitCharts study guide on Athol Fugard's My Children! My Africa!. Created by the original team behind SparkNotes, LitCharts are the world's best literature guides.

My Children! My Africa!: Introduction

A concise biography of Athol Fugard plus historical and literary context for My Children! My Africa!.

My Children! My Africa!: Plot Summary

A quick-reference summary: My Children! My Africa! on a single page.

In-depth summary and analysis of every act of My Children! My Africa!. Visual theme-tracking, too.

My Children! My Africa!: Themes

Explanations, analysis, and visualizations of My Children! My Africa!'s themes.

My Children! My Africa!: Quotes

My Children! My Africa!'s important quotes, sortable by theme, character, or act.

My Children! My Africa!: Characters

Description, analysis, and timelines for My Children! My Africa!'s characters.

Description, analysis, and timelines for My Children! My Africa!'s terms.

My Children! My Africa!: Symbols

Explanations of My Children! My Africa!'s symbols, and tracking of where they appear.

My Children! My Africa!: Theme Wheel

An interactive data visualization of My Children! My Africa!'s plot and themes.

Athol Fugard, South Africa’s preeminent playwright, was born to an Afrikaner mother and an English father in a small town in South Africa’s Great Karoo desert region. He was primarily raised in the provincial capital of Port Elizabeth, Eastern Cape. After dropping out of college to hitchhike his way across Africa, Fugard spent two years working on a ship and traveling around the world. Upon returning to South Africa, he married and started working at the Fordsburg Native Commissioner’s Court in Johannesburg. This job allowed him to see the apartheid system’s unjust policies firsthand. Next, Fugard went to work at South Africa’s National Theatre Organization, where he learned to produce plays. Soon, he returned to Port Elizabeth and started writing plays of his own and staging them with his multiracial acting troupes, the Circle Players and the Serpent Players. For the next three decades, the struggle against apartheid became the consuming theme and purpose of Fugard’s writing. His first major play, The Blood Knot (1961), won Fugard international recognition but also persecution and surveillance by the South African government. He faced multiple political trials, lost his passport, and was frequently forced to publish his work in England or the United States instead of South Africa. Many of his plays reached a wide audience when they were filmed and broadcast across the English-speaking world. In total, Fugard has written, produced, and performed in more than 30 plays spanning a wide variety of genres but almost always set in South Africa and concerned with the effects of apartheid. Among the most influential are Boesman and Lena (1969), Sizwe Bansi is Dead and The Island (1972), and “Master Harold”…and the Boys (1982). In the late 1980s and early 1990s, with plays like My Children! My Africa!, Fugard began to look toward the future and ask what it would take for South Africans to establish a just, multiracial democracy. He also began to examine his own personal and family history, and he spent long periods of time living and teaching in the United States from the 1990s onward. However, Fugard returned to South Africa in 2012, and he continues to write plays there.
Get the entire My Children! My Africa! LitChart as a printable PDF.
"My students can't get enough of your charts and their results have gone through the roof." -Graham S.
Download 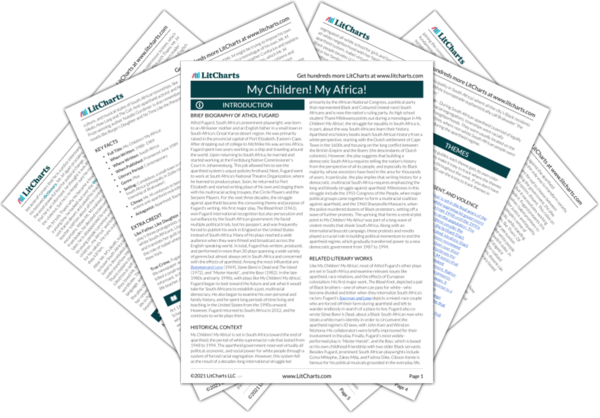 Historical Context of My Children! My Africa!

My Children! My Africa! is set in South Africa toward the end of apartheid, the period of white supremacist rule that lasted from 1948 to 1994. The apartheid government reserved virtually all political, economic, and social power for white people through a system of forced racial segregation. However, this system fell as the result of a decades-long international struggle led primarily by the African National Congress, a political party that represented Black and Coloured (mixed-race) South Africans and is now the nation’s ruling party. As high school student Thami Mbikwana points out during a monologue in My Children! My Africa!, the struggle for equality in South Africa is, in part, about the way South Africans learn their history. Apartheid-era history books teach South African history from a white perspective, starting with the Dutch settlement of Cape Town in the 1600s and focusing on the long conflict between the British Empire and the Boers (the descendants of Dutch colonists). However, the play suggests that building a democratic South Africa requires telling the nation’s history from the perspective of all its people, and especially its Black majority, whose ancestors have lived in the area for thousands of years. In particular, the play implies that writing history for a democratic, multiracial South Africa requires emphasizing the long and bloody struggle against apartheid. Milestones in this struggle include the 1955 Congress of the People, when major political groups came together to form a multiracial coalition against apartheid, and the 1960 Sharpeville Massacre, when the police murdered dozens of Black protestors, setting off a wave of further protests. The uprising that forms a central plot point in My Children! My Africa! was part of a long wave of violent revolts that shook South Africa. Along with an international boycott campaign, these protests and revolts played a crucial role in building political momentum to end the apartheid regime, which gradually transferred power to a new democratic government from 1987 to 1994.

Other Books Related to My Children! My Africa!

Like My Children! My Africa!, most of Athol Fugard’s other plays are set in South Africa and examine relevant issues like apartheid, race relations, and the effects of European colonialism. His first major work, The Blood Knot, depicted a pair of Black brothers—one of whom can pass for white—who become divided and bitter when they internalize South Africa’s racism. Fugard’s Boesman and Lena depicts a mixed-race couple who are forced off their farm during apartheid and left to wander endlessly in search of a place to live. Fugard also co-wrote Sizwe Bansi is Dead, about a Black South African man who steals a white man’s identity in order to circumvent the apartheid regime’s ID laws, with John Kani and Winston Ntshona. His collaborators were briefly imprisoned for their involvement in the play. Finally, Fugard’s most widely-performed play is “Master Harold”…and the Boys, which is based on his own childhood friendship with two older Black servants. Besides Fugard, prominent South African playwrights include Gcina Mhlophe, Zakes Mda, and Fatima Dike. Gibson Kente is famous for his political musicals grounded in the everyday life, culture, and musical styles of South African townships, like Sikalo, How Long and The Call. Anti-apartheid activist and Nobel Prize-winning author Natalie Gordimer is also remembered for novels like Burger’s Daughter and No Time Like the Present.
Key Facts about My Children! My Africa!

Extra Credit for My Children! My Africa!

Like Father, Like Daughter. Fugard based Isabel, one of the play’s three protagonists, on his daughter Lisa. Like many young white South Africans, Lisa struggled to make sense of apartheid and translate her guilt into political action. In fact, Lisa played the role of Isabel when it was first performed in London and New York.

True Crime. Fugard based the story of Mr. M’s death on a real-life newspaper article: during an anti-apartheid protest, a mob killed a small-town schoolteacher, allegedly for being a police informant. In fact, Fugard named his character after this real-life teacher, Anela Myalatya. 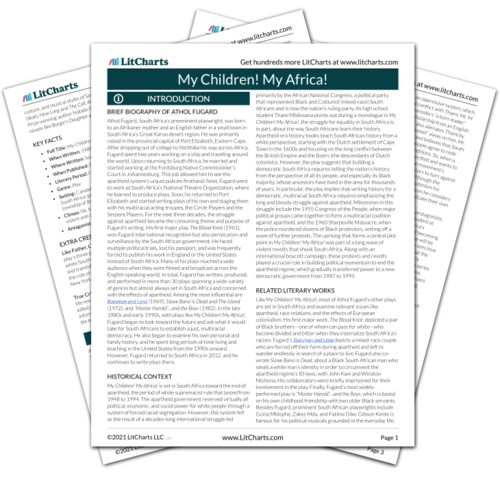 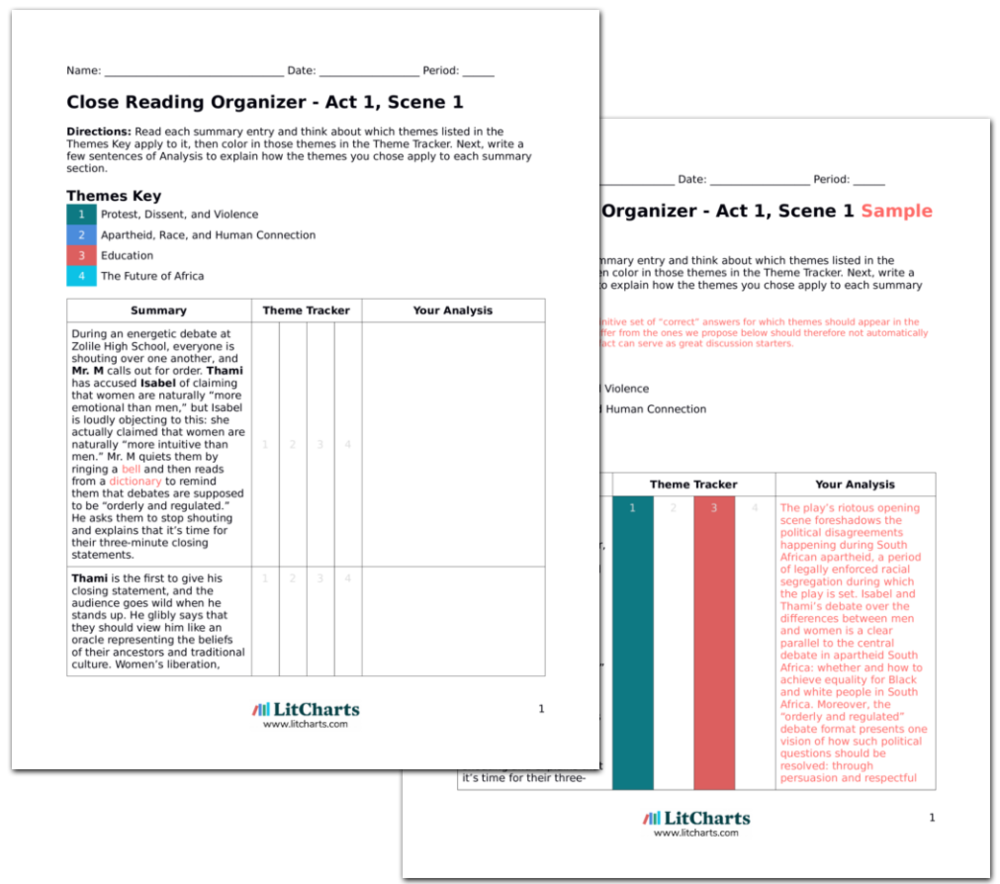