Get LitCharts A+
LitCharts assigns a color and icon to each theme in One Flew Over the Cuckoo's Nest, which you can use to track the themes throughout the work.

Randle McMurphy is shocked to learn that there are more men on the psych ward who are voluntarily committed than those, like him, who have been committed by the state. Dale Harding, for instance, is so ashamed of his homosexuality that he chooses to commit himself to a mental asylum to escape the shame he feels around his wife. Billy Bibbit is in his early thirties, but he has become so infantilized and reliant on his mother’s acceptance and approval that he is paralyzed by the thought of being with another woman, or of his mother finding out anything about him that would lessen her esteem of him (e.g. when he sleeps with Candy and blames the events on McMurphy and the rest of the men).

The novels makes it clear that many of these men are holding themselves back from living freely because they are terrified of how they will be received by the general population for their behaviors. Not fitting in because of sexual orientation, ethnic background, infantilization—no matter what it is, the men fear what makes them different and would rather hide from society than face its judgment of them. The judgments about what constitutes normal or abnormal behavior, about what is shameful and what is not, are decided by the few in positions of institutional power, but their influence and legitimacy gives their views—however wrong or right—the ability to become the definition of what is Normal in society. For most of these men, they simply cannot deal with the shame of not fitting into what is conventionally normal until McMurphy helps them to recognize their own internal dignity and self-worth, to reconnect with themselves in a way that is unaffected by society's perception of them.

The ThemeTracker below shows where, and to what degree, the theme of Social Pressure and Shame appears in each chapter of One Flew Over the Cuckoo's Nest. Click or tap on any chapter to read its Summary & Analysis.
How often theme appears:
chapter length:
Chapter
Part One
1
Part Two
2
Part Three
3
Part Four
4
Get the entire One Flew Over the Cuckoo's... LitChart as a printable PDF.
"My students can't get enough of your charts and their results have gone through the roof." -Graham S.
Download 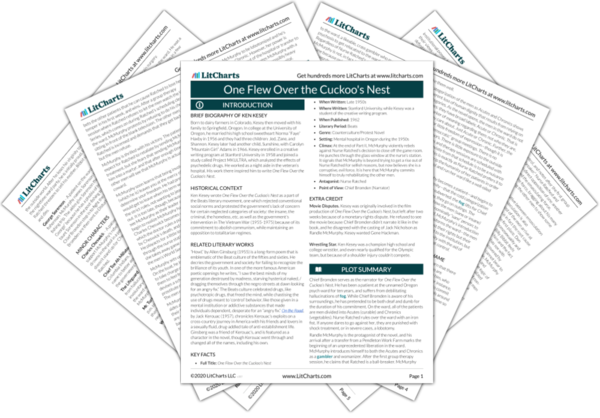 Below you will find the important quotes in One Flew Over the Cuckoo's Nest related to the theme of Social Pressure and Shame.
Part One Quotes

Across the room from the Acutes are the culls of the Combine’s product, the Chronics. Not in the hospital, these, to get fixed, but just to keep them from walking around the streets giving the product a bad name. Chronics are in for good, the staff concedes. Chronics are divided into Walkers like me, can still get around if you keep them fed, and Wheelers and Vegetables. What the Chronics are—or most of us—are machines with flaws inside that can’t be repaired, flaws born in, or flaws beat in over so many years of the guy running head-on into solid things that by the time the hospital found him he was bleeding rust in some vacant lot.

This world…belongs to the strong, my friend! The ritual of our existence is based on the strong getting stronger by devouring the weak. We must face up to this. Nor more than right that it should be this way. We must learn to accept it as a law of the natural world. The rabbits accept their role in the ritual and recognize the wolf as the strong. In defense, the rabbit becomes sly and frightened and elusive and he digs holes and hides when the wolf is about. And he endures, he goes on. He knows his place. He most certainly doesn’t challenge the wolf to combat. Now, would that be wise? Would it?

There was times that week when I’d hear that full-throttled laugh, watch [McMurphy] scratching his belly and stretching and yawning and leaning back to wink at whoever he was joking with, everything coming to him just as natural as drawing breath, and I’d quit worrying about the Big Nurse and the Combine behind her. I’d think he was strong enough being his own self that he would never back down the way she was hoping he would. I’d think, maybe he truly is something extraordinary. He’s what he is, that’s it. Maybe that makes him strong enough, being what he is. The Combine hasn’t got to him in all these years; what makes the nurse think she’s gonna be able to do it in a few weeks? He’s not gonna let them twist him and manufacture him.

Tell me why. You gripe, you bitch for weeks on end about how you can’t stand this place, can’t stand the nurse or anything about her, and all the time you ain’t committed. I can understand it with some of those old guys on the ward. They’re nuts. But you, you’re not exactly the everyday man on the street, but you’re not nuts.

Please understand: We do not impose certain rules and restrictions on you without a great deal of thought about their therapeutic value. A good many of you are in here because you could not adjust to the rules of society in the Outside World, because you refused to face up to them, because you tried to circumvent them and avoid them. At some time—perhaps in your childhood—you may have been allowed to get away with flouting the rules of society. When you broke a rule you knew it. You wanted to be dealt with, needed it, but the punishment did not come. That foolish lenience on the part of your parents may have been the germ that grew into your present illness. I tell you this hoping you will understand that it is entirely for your own good that we enforce discipline and order.

They could sense the change that most of us were only suspecting; these weren’t the same bunch of weak-knees from a nuthouse that they’d watched take their insults on the dock this morning. They didn’t exactly apologize to the girl for the things they’d said, but when they ask to see a fish she’d caught they were just as polite as pie. And when McMurphy and the captain came back out of the bait shop we all shared a beer together before we drove away.

I been away a long time.