Download this LitChart! (PDF)
Teachers and parents! Struggling with distance learning? Our Teacher Edition on Only the Animals can help.

Welcome to the LitCharts study guide on Ceridwen Dovey's Only the Animals. Created by the original team behind SparkNotes, LitCharts are the world's best literature guides.

Only the Animals: Introduction

A concise biography of Ceridwen Dovey plus historical and literary context for Only the Animals.

Only the Animals: Plot Summary

A quick-reference summary: Only the Animals on a single page.

Only the Animals: Detailed Summary & Analysis

In-depth summary and analysis of every story of Only the Animals. Visual theme-tracking, too.

Only the Animals: Themes

Explanations, analysis, and visualizations of Only the Animals's themes.

Only the Animals: Quotes

Only the Animals's important quotes, sortable by theme, character, or story.

Only the Animals: Characters

Description, analysis, and timelines for Only the Animals's characters.

Only the Animals: Symbols

Explanations of Only the Animals's symbols, and tracking of where they appear.

Only the Animals: Theme Wheel

An interactive data visualization of Only the Animals's plot and themes.

Born in South Africa, Ceridwen Dovey spent her childhood moving back and forth often between South Africa and Australia. As a teenager, she made the choice to remain in Sydney, Australia, for high school while her parents returned to South Africa. In 1999, she began her studies at Harvard University and earned a joint degree in anthropology and visual and environmental studies. Following her graduation, she used experience she gained making documentary films in college to work briefly in television in New York City. Then, she moved to South Africa to study creative writing at the University of Cape Town. Her first novel, Blood Kin, was written as part of her creative writing masters thesis. It was published in several countries in 2007 and was shortlisted for a number of prizes in 2007 and 2008. Dovey also completed graduate work at New York University in social anthropology before returning to Sydney, Australia. Only the Animals is her second book, and it also won several awards. Following the book’s publication, Dovey turned to writing full-time. She lives in Sydney with her husband and two sons.
Get the entire Only the Animals LitChart as a printable PDF.
"My students can't get enough of your charts and their results have gone through the roof." -Graham S.
Download 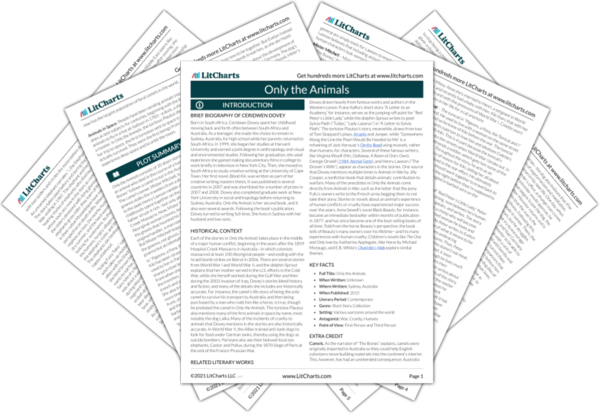 Historical Context of Only the Animals

Each of the stories in Only the Animals takes place in the middle of a major human conflict, beginning in the years after the 1859 Hospital Creek Massacre in Australia—in which colonists massacred at least 100 Aboriginal people—and ending with the Israeli bomb strikes on Beirut in 2006. There are several stories from World War I and World War II, and the dolphin Sprout explains that her mother served in the U.S. efforts in the Cold War, while she herself worked during the Gulf War and then during the 2003 invasion of Iraq. Dovey’s stories blend history and fiction, and many of the details she includes are historically accurate. For instance, the camel’s life story of being the only camel to survive his transport to Australia, and then being purchased by a man who rode him like a horse, is true, though he predated the camel in Only the Animals. The tortoise Plautus also mentions many of the first animals in space by name, most notably the dog Laika. Many of the incidents of cruelty to animals that Dovey mentions in the stories are also historically accurate. In World War II, the Allies trained anti-tank dogs to look for food under German tanks, thereby using the dogs as suicide bombers. Parisians also ate their beloved local zoo elephants, Castor and Pollux, during the 1870 Siege of Paris at the end of the Franco-Prussian War.

Other Books Related to Only the Animals

Dovey draws heavily from famous works and authors in the Western canon. Franz Kafka’s short story “A Letter to an Academy,” for instance, serves as the jumping-off point for “Red Peter’s Little Lady,” while the dolphin Sprout writes to poet Sylvia Plath (“Tulips,” “Lady Lazarus”) in “A Letter to Sylvia Plath.” The tortoise Plautus’s story, meanwhile, draws from two of Tom Stoppard’s plays, Arcadia and Jumper, while “Somewhere Along the Line the Pearl Would Be Handed to Me” is a rehashing of Jack Kerouac’s On the Road using mussels, rather than humans, for characters. Several of these famous writers, like Virginia Woolf (Mrs. Dalloway, A Room of One’s Own), George Orwell (1984, Animal Farm), and Henry Lawson (“The Drover’s Wife”), appear as characters in the stories. One source that Dovey mentions multiple times is Animals in War by Jilly Cooper, a nonfiction book that details animals’ contribution to warfare. Many of the anecdotes in Only the Animals come directly from Animals in War, such as the letter that the pony Fufu’s owners write to the French army begging them to not take their pony. Stories or novels about an animal’s experience of human conflicts or cruelty have experienced major success over the years. Anna Sewell’s novel Black Beauty, for instance, became an immediate bestseller within months of publication in 1877, and has since become one of the best-selling books of all time. Told from the horse Beauty’s perspective, the book tells of Beauty’s many owners over his lifetime—and his many experiences with human cruelty. Children’s novels like The One and Only Ivan by Katherine Applegate, War Horse by Michael Morpugo, and E.B. White’s Charlotte’s Web explore similar themes.
Key Facts about Only the Animals

Extra Credit for Only the Animals

Camels. As the narrator of “The Bones” explains, camels were originally imported to Australia so they could help English colonizers move building materials into the continent’s interior. This, however, has had an unintended consequence: Australia now has the largest population of feral camels in the world.

Animals in Space. People have been sending animals into the skies as test subjects for centuries, beginning with the first animals to fly in a hot air balloon in 1783—a duck, a sheep, and a rooster. In Only the Animals, the tortious Plautus died during her trip to space, the first tortoises sent to space in 1968 actually survived. They were the first beings from Earth to experience deep space and to orbit the moon. 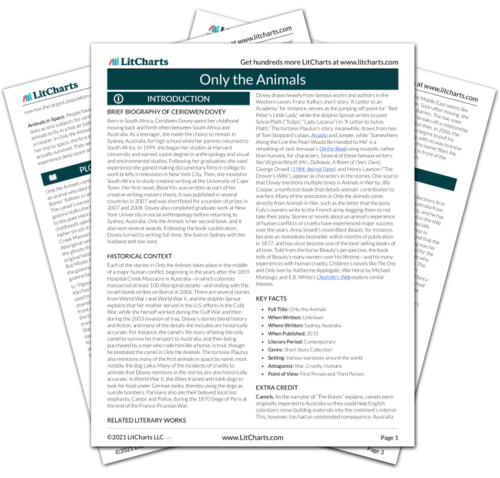 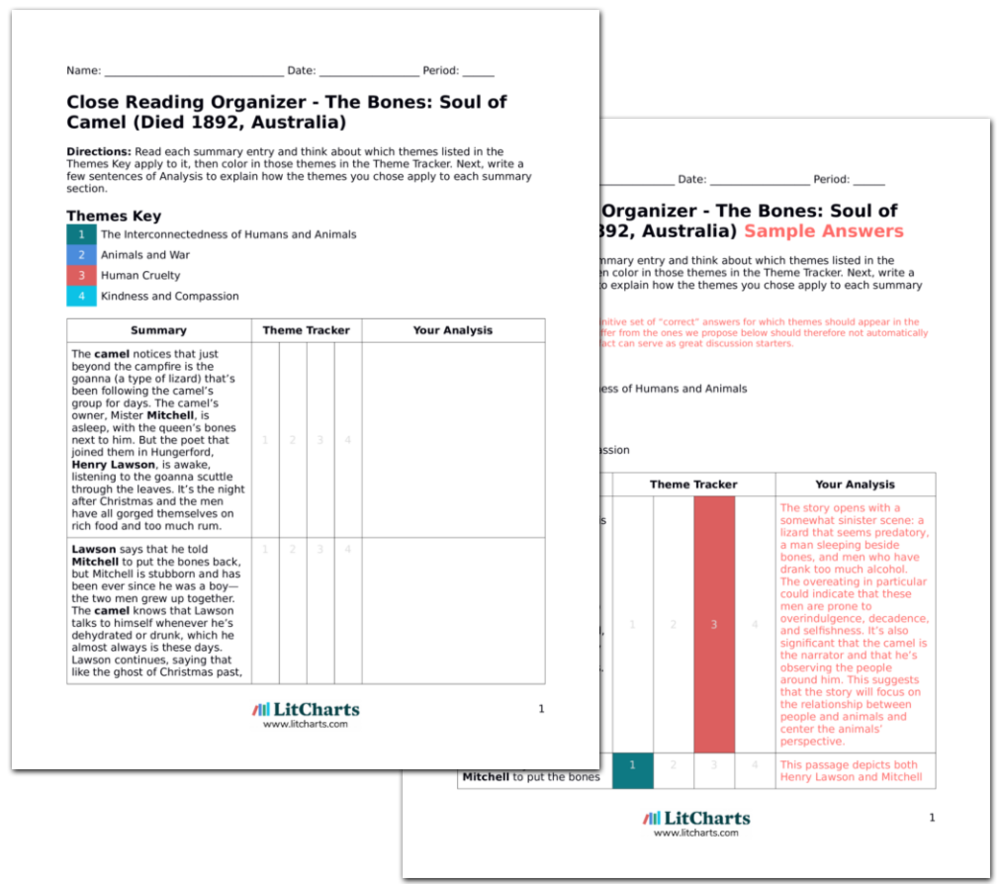