Download this LitChart! (PDF)
Teachers and parents! Struggling with distance learning? Our Teacher Edition on Past the Shallows can help.

Welcome to the LitCharts study guide on Favel Parrett's Past the Shallows. Created by the original team behind SparkNotes, LitCharts are the world's best literature guides.

Past the Shallows: Introduction

A concise biography of Favel Parrett plus historical and literary context for Past the Shallows.

Past the Shallows: Plot Summary

A quick-reference summary: Past the Shallows on a single page.

Past the Shallows: Detailed Summary & Analysis

In-depth summary and analysis of every chapter of Past the Shallows. Visual theme-tracking, too.

Past the Shallows: Themes

Explanations, analysis, and visualizations of Past the Shallows's themes.

Past the Shallows: Quotes

Past the Shallows's important quotes, sortable by theme, character, or chapter.

Past the Shallows: Characters

Description, analysis, and timelines for Past the Shallows's characters.

Description, analysis, and timelines for Past the Shallows's terms.

Past the Shallows: Symbols

Explanations of Past the Shallows's symbols, and tracking of where they appear.

Past the Shallows: Theme Wheel

An interactive data visualization of Past the Shallows's plot and themes.

Though born in mainland Australia, Favel Parrett was raised primarily in Hobart, Tasmania. Amidst their parents’ broken marriage, Parrett was (and remains) extremely close with her younger brother James, who served as the inspiration for Harry Curren’s character. As a teenager, Parrett spent summers in the far south coast of Tasmania with her mother. The stunning, majestic landscape and rough waters of the region made a significant impact on her that she drew upon to create the setting for Past the Shallows. Parrett always dreamed of being a writer and had a zine called Numb as a young adult, but it was not until her thirties that she began seriously honing her craft. After studying Professional Writing and Editing through a technical and continuing education program, Parrett published Past the Shallows as her debut novel in 2011. She has since gone on to publish a second novel titled When the Night Comes and has contributed to a variety of literary journals and other publications. Parrett’s books have been translated into several different languages and she has been nominated for a host of literary awards. In 2012, Past the Shallows won the Dobbie Literary Award as well as Newcomer of the Year at the Australian Book Industry Awards.
Get the entire Past the Shallows LitChart as a printable PDF.
"My students can't get enough of your charts and their results have gone through the roof." -Graham S.
Download 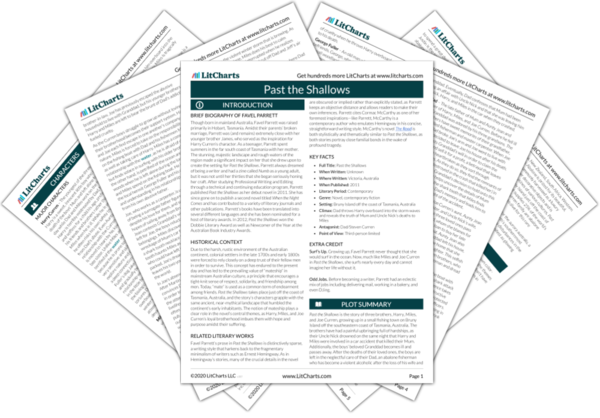 Historical Context of Past the Shallows

Due to the harsh, rustic environment of the Australian continent, colonial settlers in the late 1700s and early 1800s were forced to rely closely on a deep trust of their fellow men in order to survive. This concept has endured to the present day and has led to the prevailing value of “mateship” in mainstream Australian culture, a principle that encourages a tight-knit sense of respect, solidarity, and friendship among men. Today, “mate” is used as a common term of endearment among friends. Past the Shallows takes place just off the coast of Tasmania, Australia, and the story’s characters grapple with the same ancient, near-mythical landscape that humbled the continent’s early inhabitants. The notion of mateship plays a clear role in the novel’s central themes, as Harry, Miles, and Joe Curren’s loyal brotherhood imbues them with hope and purpose amidst their suffering.

Other Books Related to Past the Shallows

Favel Parrett’s prose in Past the Shallows is distinctively sparse, a writing style that harkens back to the fragmentary minimalism of writers such as Ernest Hemingway. As in Hemingway’s stories, many of the crucial details in the novel are obscured or implied rather than explicitly stated, as Parrett keeps an objective distance and allows readers to make their own inferences. Parrett cites Cormac McCarthy as one of her foremost inspirations—like Parrett, McCarthy is a contemporary author who emulates Hemingway in his concise, straightforward writing style. McCarthy’s novel The Road is both stylistically and thematically similar to Past the Shallows, as both stories portray close familial bonds in the wake of profound tragedy.
Key Facts about Past the Shallows

Extra Credit for Past the Shallows

Surf’s Up. Growing up, Favel Parrett never thought that she would surf in the ocean. Now, much like Miles and Joe Curren in Past the Shallows, she surfs nearly every day and cannot imagine her life without it.

Odd Jobs. Before becoming a writer, Parrett had an eclectic mix of jobs including delivering mail, working in a bakery, and even DJing. 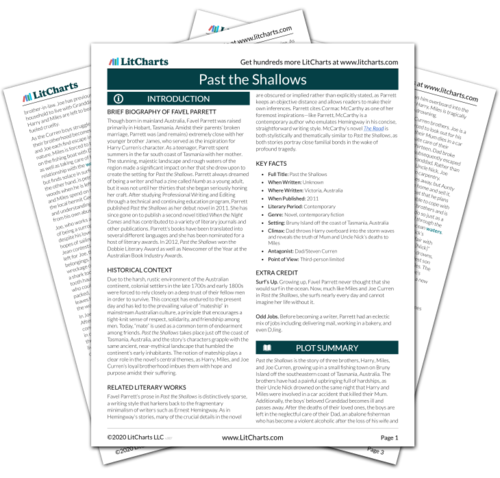 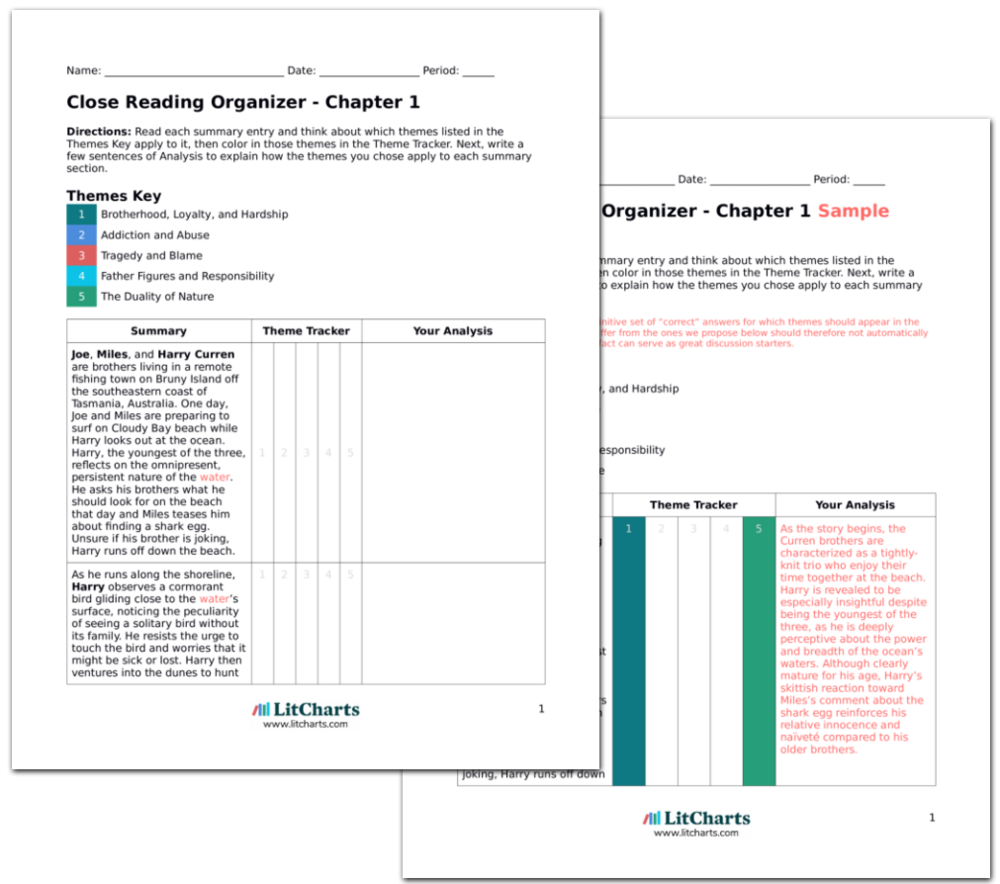