It’s late at night, and Catherine is sitting on her back porch in Chicago. Her father, Robert, comes outside, startling her by asking if she can’t sleep. She explains that she’s waiting for one of his students to leave, and he points to a bottle of champagne and wishes her a happy 25th birthday.

Robert asks Catherine to do some math with him, and when she refuses, he sternly tells her that she has been wasting her talent. Catherine isn’t convinced that she has much potential, especially in comparison to Robert, who was already famous by the time he was her age. Catherine then asks Robert when his illness set in. As he explains that he was in his mid-twenties when he “went bughouse,” he realizes that Catherine is afraid that the same thing will happen to her. He tries to reassure her that she’ll be okay, but Catherine points out that their conversation is a bad sign: Robert is dead, which means she’s imagining him.

Robert disappears when Hal, one of his former students, steps out onto the porch. Hal has been going through the 103 notebooks that Robert left behind, searching for publishable work. Catherine believes that Hal is wasting his time—she’s certain that the notebooks only contain gibberish. But Hal wants to be sure.

On a hunch that Hal is trying to steal Robert’s notebooks to take credit for his work, Catherine demands to see Hal’s backpack. When he refuses to hand over his bag, she snatches it, but there’s no notebook inside. As Hal starts to leave, Catherine sees that he has forgotten his jacket—when she picks it up, a notebook falls out. She calls the police. As she’s speaking with the dispatcher, Hal tries to explain, reading aloud an entry in which Robert thanks Catherine for taking care of him. She hangs up the phone, and Hal says that he was going to wrap the notebook and give it to Catherine as a birthday gift. After he leaves, Catherine cries.

The next morning, Catherine’s sister Claire is on the porch. Claire pesters Catherine with questions, asking whether she is feeling okay and what her plans for the future are now that Robert is gone. When Catherine asks why Claire is interrogating her, Claire says that some policemen stopped by that morning to check on Catherine, who was reported to have behaved erratically the previous night. When Catherine tells her sister about Hal, Claire doesn’t believe he exists. She’s worried that Catherine is going crazy and encourages Catherine to move in with her in New York City. But then Hal arrives to continue reading the notebooks, and Catherine insists that she doesn’t need Claire’s help—she’s not imagining people, and she’s fine on her own.

Following Robert’s funeral that afternoon, Claire hosts a party. During the celebration, Hal joins Catherine on the porch. The party is going late, which Hal says is because mathematicians are intense partiers—some of the older ones even take amphetamines to keep up with the younger men. After pointing out the sexism in his comment, Catherine tells Hal of Sophie Germain, an 18th century mathematician who was discriminated against because of her gender. Hal kisses her. He quickly apologizes, but she says it’s alright. They kiss some more.

The next morning, Hal joins Catherine on the porch. Things are awkward until Hal tells Catherine that he’d like to spend the day with her, which makes her happy. She then gives him a key and instructs him to use it to open a drawer in Robert’s office. As Hal leaves, an extremely hungover Claire joins Catherine on the porch. Claire asks Catherine again to move to New York City with her, but Catherine vehemently refuses, offended at Claire’s assumption that she’s unstable. Hal’s entrance interrupts their argument. He carries a notebook with him as he profusely thanks Catherine. When Claire is confused, Hal explains that the notebook contains an important proof. He credits Catherine with finding it, assuming that it’s Robert’s proof—but Catherine announces that she actually wrote it.

The story flashes back to a September afternoon four years prior. Robert and Catherine are sitting on the porch when Catherine reveals that she is going to start school at the end of the month. They begin to argue but are interrupted by Hal, who gives Robert an envelope containing his dissertation. Robert congratulates Hal before announcing that Catherine will also be studying math, starting that fall. Catherine is surprised but pleased. Hal asks Robert if he is doing any work at the moment, but he says he isn’t. Turning to Catherine, Robert says that she might “pick up where [he] left off.” Suddenly remembering that it’s Catherine’s birthday, Robert suggests that they go out that evening. After Hal and Catherine exit—Catherine to get ready and Hal to leave the house—Robert opens a nearby notebook and begins to write the journal entry that Hal finds years later.

Back in the present, neither Hal nor Claire believe that Catherine wrote the proof. They think Robert wrote it: the handwriting looks like Robert’s, and Hal insists that the math is beyond Catherine’s capabilities. Hurt, Catherine offers to go over the proof with him, but Hal says that he and several colleagues will determine whose work it is. When Catherine refuses to give Hal the notebook, he stalks off.

The next day, Hal returns to the house to see Catherine, but Claire won’t let him—Catherine is unwell. Claire accuses Hal of taking advantage of Catherine’s instability by sleeping with her, which he denies. Claire then hands him the notebook, telling him to call her when he has more information.

The play flashes back to a winter day three-and-a-half years prior. Catherine steps onto the porch to see Robert wearing just a t-shirt while writing in a notebook. He excitedly tells her that his mind is working creatively again, and he hopes that the two of them can work together on the proof that he has started. He hands Catherine one of his notebooks and instructs her to read it. She begins to read the notebook aloud, revealing that it’s gibberish. Robert starts to shiver, and Catherine leads him back into the house.

The play jumps back to the present, about a week after Claire gave Hal the notebook. Claire is on the porch, holding a plane ticket. Catherine joins her, carrying some bags. When Catherine says that she could stay on her own in Chicago if she wanted to, Claire is adamant that she couldn’t handle it. They keep arguing until Claire storms off in tears.

Catherine is still sitting on the porch when Hal runs up to her with the notebook. He tells her that he believes her now—the proof uses modern techniques that Robert wouldn’t have known. He asks her to go over the proof with him, but she refuses. She is upset and tells him that he should have trusted her. After a moment, Hal asks whether she’s really leaving Chicago. She tells him that it might be nice to be taken care of—she’s afraid that she really does suffer the same illness as her father. Hal says that she is “not him […] Maybe she’ll be better.” Catherine hesitates, then she opens the notebook and begins to read. 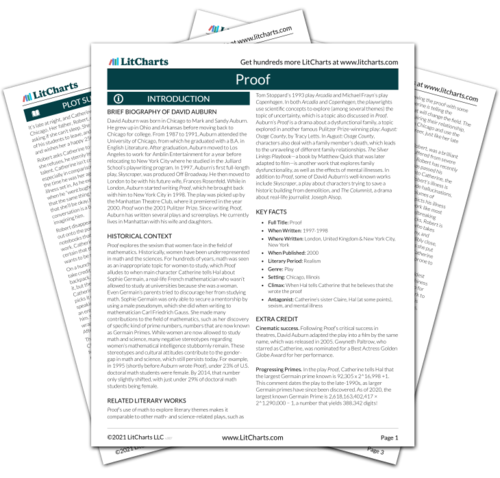 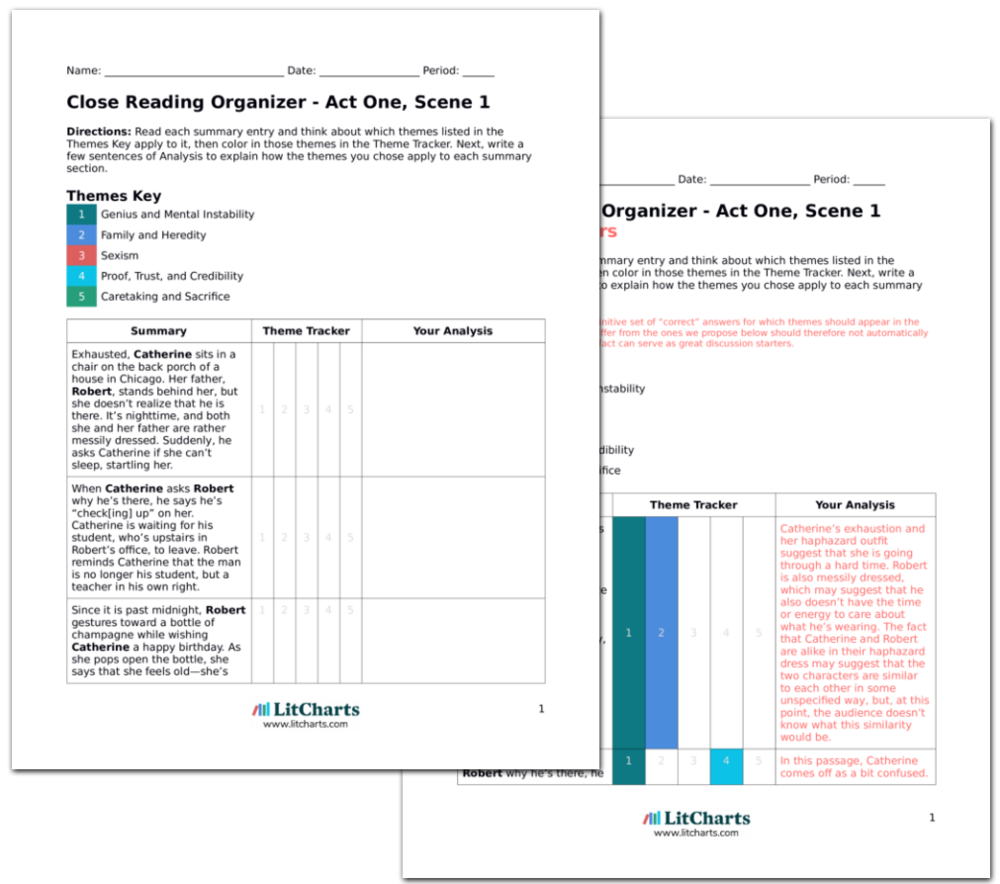