One of the central issues at stake in Shafana & Aunt Sarrinah is the relationship between identity and self-presentation. Aunt Sarrinah worries about Shafana’s decision to wear a hijab because of the message she fears it will send to other people. Aunt Sarrinah is afraid that ignorant people who are prejudiced against Muslims will see her niece not as an individual human being, but as a representative of the entire Islamic faith—which unfortunately includes the small minority of terrorists who use violence to set forth an extremist, fundamentalist approach to Islam. But such things won’t stop Shafana from wearing a hijab, since she feels that doing so would be deeply meaningful— the hijab would represent something central to her newly developing identity as a religious woman. For her, wearing a hijab feels like a very genuine expression of who she is (or, more specifically, who she has become since reconnecting with her Islamic faith). The hijab itself is therefore not just a garment, but an embodiment of her identity. “It is for me, not for anyone else,” she says, explaining that she wants to wear a hijab because it aligns with and reaffirms her sense of self on a very deep level. In other words, the way she presents herself to the world is closely linked to her identity. And though it might disconcert Aunt Sarrinah to see Shafana present herself as a devout Muslim, the fact of the matter is that this is how Shafana sees herself. To not wear a hijab, then, would be to deny what she feels is her true identity.

Although Aunt Sarrinah doesn’t want Shafana to wear a hijab, she doesn’t actually stand in the way of her niece’s decision. It seems that she understands—on some level, at least—that certain forms of self-presentation are highly personal because they’re directly tied to essential elements of a person’s identity. In this way, the play shows that while appearances are often superficial and don’t accurately represent who people are, certain kinds of self-presentation are especially meaningful because they really can embody and reaffirm central aspects of a person’s identity.

The ThemeTracker below shows where, and to what degree, the theme of Identity and Self-Presentation appears in each chapter of Shafana and Aunt Sarrinah. Click or tap on any chapter to read its Summary & Analysis.
How often theme appears:
chapter length:
Chapter
Shafana & Aunt Sa...
Get the entire Shafana and Aunt Sarrinah LitChart as a printable PDF.
"My students can't get enough of your charts and their results have gone through the roof." -Graham S.
Download 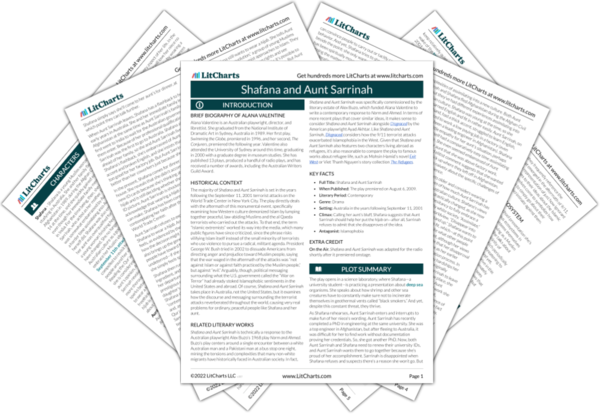 Below you will find the important quotes in Shafana and Aunt Sarrinah related to the theme of Identity and Self-Presentation.
Shafana & Aunt Sarrinah Quotes

SHAFANA: I want to put on the hijab.

SARRINAH: Hijab is an Arabic word. Meaning partition. We are not Arabs. We are Persians.

SHAFANA: What do you think?

SARRINAH: This is an option for all Muslim women. Down the trail.

SHAFANA: Mum said that she had been contemplating on it for the past five years but had never taken the step to do it. Dad asked me if I was sure of what I was doing. Had I thought about all the consequences, all the things that are going on around the world, all the employment considerations.

SARRINAH: But if you really feel it in your heart these are not reasons not to do it.

SARRINAH: And is that how you feel?

SHAFANA: I want to make real the change that has happened to me, that God really is there and I believe that.

SHAFANA: Yes, but I went to the primary sources.

SARRINAH: You are reading the Qur’an?

SHAFANA: I am reading specific explicit verses of mercies, insight, knowledge and understanding. The scope and the breadth and the depth of Islam is overwhelming, so much connecting to me, and it’s like answering one of the most profound questions that I have been asking all this time. Aunt, all at one go it just made me literally ecstatic.

SHAFANA: But I do not believe it is a holy war.

SARRINAH: Don’t get into that.

SHAFANA: But I don’t. This killing people, this one human being doing such things to another.

SHAFANA: This is not Islam.

SARRINAH: Don’t open it up.

SHAFANA: But I read it myself. Specific verses of mercies, insight, compassion, kindness.

SARRINAH: But that is not what your assignment is asking of you. It is asking you to analyse the crisis, analyse the discourse around it, compare and contrast various points of view, summarise, and provide a lucid overview.

SHAFANA: I am not thinking of it for any of those reasons. All you have mentioned is about consequences. I am not motivated by any of that.

SHAFANA: No. Do you want to hear? Do you want to hear me when I say that I want to put on the scarf because this is who I am and I feel this is what I want to do? It is for me, not for anyone else. One night I was reading the Qur’an and it just occurred to me, I don’t even recall what passage or where, and it just occurred to me, ‘Why am I not wearing the scarf, what is stopping me?’

SHAFANA: Have you heard of the soft revolution?

SHAFANA: It’s young Muslims who reject both extremists and liberals. They… fight… for human rights… for change to the Hadith… There is a project. It could be the most intellectually active period for Islam since the height of scholarship in the Middle ages.

SARRINAH: And you want to be part of it?

SHAFANA: I don’t know. But for them, for some, the veil is a mask in the power struggle against the dictatorship of men.

SARRINAH: You think you can synthesise Qur’anic values with the twenty-first century?

SARRINAH: You want to participate in a faith that judges others by the rules it fashions.

SARRINAH: The rules. The outward cladding of piety.

SARRINAH: Yes. You want to judge my faith.

SARRINAH: My faith is between me and God. The Qur’an speaks directly to me, Sarrinah, today.

SARRINAH: It is a fundamental part of who I am.

SHAFANA: It is all of who I am.

SHAFANA: But your faith touches every part of your life.

SARRINAH: No. My faith is private and cultural. But it is not the answer to all the freedoms we have struggled for.

SHAFANA: But how can you say that?

SARRINAH: You’ll see me. I’ll see you. But we won’t be able to… see each other.

SHAFANA: Why are you being so ruthless?

SARRINAH: We can pretend. We can pretend that this is a disagreement about… oh, I don’t know… what TV chef we like best. Let’s pretend it’s just like that. And say… nothing. But, deeply, I am opposed to the path you advocate. Now. 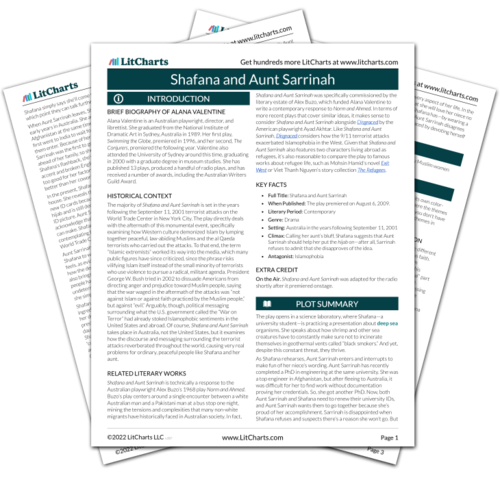 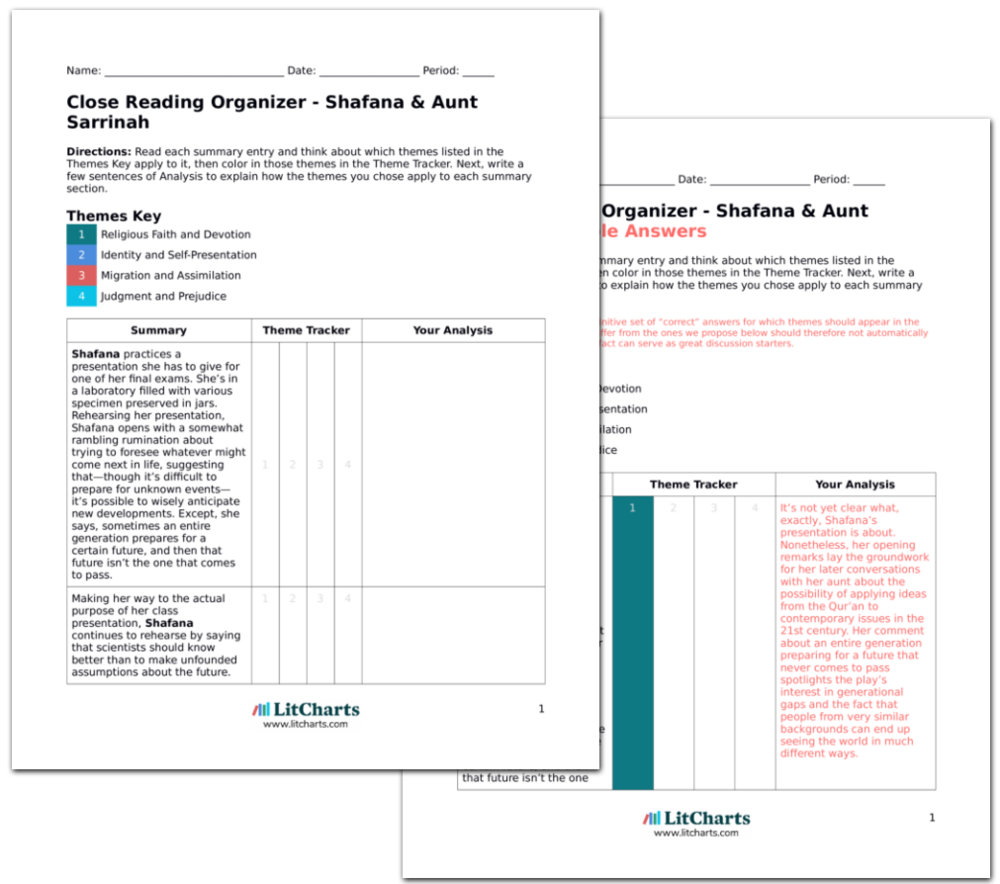