It’s important to keep in mind that Sophie Amundsen isn’t just a young philosophy student—she’s also a young woman. Because of her gender, Sophie has to contend with various expectations about how she should behave—for example, that she should have a boyfriend, should enjoy hosting parties, etc. Because Sophie faces sexism so often in the novel, it’s strongly implied from the beginning that philosophy might be a way for her to escape this sexism, or to find ways around it.

As Sophie proceeds with her studies of philosophy, however, she finds that Western philosophy is full of sexism. There are dozens of important philosophers—Aristotle is a good example—who had backwards ideas of what women were capable of and what they should do with their lives. Even philosophers like Plato, who argued for some form of equality between the sexes, believed that women were usually inferior to men.

But even if the history of philosophy is strewn with sexist reasoning—i.e., reasoning that assumes without proof that women are less important than men—Sophie finds that philosophy in itself can still be a powerful tool for fighting sexism. As she proceeds with her studies, she learns to reject the sexist aspects of philosophers’ thinking while embracing other components of their ideas. In this way, Sophie learns to use philosophers’ own ideas against them. This becomes especially clear toward the end of the novel when Sophie learns about Simone de Beauvoir, who argued that the supposed differences between the sexes were social constructs—illusions caused by society’s mistaken assumptions about the relationship between existence and essence. Sophie understands and embraces de Beauvoir’s ideas about gender and essence precisely because she hasn’t entirely rejected the ideas of de Beauvoir’s sexist predecessors. Like de Beauvoir herself, she uses philosophical reasoning to undermine what might be called a traditional tenet of Western philosophy—the inferiority of women.

In general, Sophie learns that philosophy is an important feminist weapon, in the sense that it teaches her to question things that some people take for granted—like sexist views on women. It’s important to contrast Sophie’s attitude with her Mom’s. Sophie’s mother seems to have little patience for philosophy; when her daughter sneaks out of the house to continue her lessons, she assumes that Sophie is meeting a boyfriend, not educating her mind. The implication is that Sophie’s mother’s unconscious sexism (assuming that her daughter is more interested in romance than knowledge) is somehow the product of her general lack of curiosity about the world—precisely the kind of curiosity that philosophy tries to generate. While there isn’t much explicit talk about the feminist uses of philosophy, Sophie’s World makes it clear that Sophie, a young woman, uses philosophy to find freedom, confidence, and maturity—and this makes her education a feminist endeavor as well as a philosophical one. 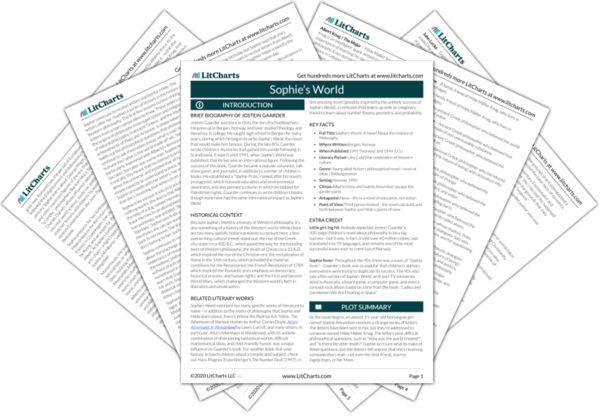 Below you will find the important quotes in Sophie’s World related to the theme of Women and Sexism.
Chapter 9 Quotes

The thought of the “young girl” led Sophie to the last question: Are women and men equally sensible? She was not so sure about that. It depended on what Plato meant by sensible. Something the philosopher had said about Socrates came into her mind. Socrates had pointed out that everyone could understand philosophical truths if they just used their common sense. He had also said that a slave had the same common sense as a nobleman. Sophie was sure that he would also have said that women had the same common sense as men.

Finally, let us look at Aristotle’s views on women. His was unfortunately not as uplifting as Plato’s. Aristotle was more inclined to believe that women were incomplete in some way. A woman was an “unfinished man.” In reproduction, woman is passive and receptive whilst man is active and productive; for the child inherits only the male characteristics, claimed Aristotle. He believed that all the child’s characteristics lay complete in the male sperm. The woman was the soil, receiving and bringing forth the seed, whilst the man was the “sower.” Or, in Aristotelian language, the man provides the “form” and the woman contributes the “substance.”

“It’s interesting to note that the eggs of mammals were not discovered until 1827. It was therefore perhaps not so surprising that people thought it was the man who was the creative and lifegiving force in reproduction. We can moreover note that, according to Aquinas, it is only as nature-being that woman is inferior to man. Woman’s soul is equal to man’s soul. In Heaven there is complete equality of the sexes because all physical gender differences cease to exist.”