Storm of Steel
Introduction + Context
Plot Summary
Detailed Summary & Analysis
In the Chalk Trenches of Champagne From Bazancourt to Hattonchâtel Les Eparges Douchy and Monchy Daily Life in the Trenches The Beginning of the Battle of the Somme Guillemont The Woods of St-Pierre-Vaast Retreat from the Somme In the Village of Fresnoy Against Indian Opposition Langemarck Regniéville Flanders Again The Double Battle of Cambrai At the Cojeul River The Great Battle British Gains My Last Assault We Fight Our Way Through
Themes
All Themes Manliness and Duty Modern Warfare Suffering and Death Foreigners, Enemies, and Empathy The Complex Reality of War
Quotes
Characters
All Characters Ernst Jünger
Symbols
All Symbols Steel Death

Download this LitChart! (PDF)
Teachers and parents! Struggling with distance learning? Our Teacher Edition on Storm of Steel can help.

Welcome to the LitCharts study guide on Ernst Jünger's Storm of Steel. Created by the original team behind SparkNotes, LitCharts are the world's best literature guides.

A concise biography of Ernst Jünger plus historical and literary context for Storm of Steel.

A quick-reference summary: Storm of Steel on a single page.

In-depth summary and analysis of every chapter of Storm of Steel. Visual theme-tracking, too.

Explanations, analysis, and visualizations of Storm of Steel's themes.

Description, analysis, and timelines for Storm of Steel's characters.

Explanations of Storm of Steel's symbols, and tracking of where they appear.

An interactive data visualization of Storm of Steel's plot and themes.

Ernst Jünger was the eldest of six children born to Ernst Georg Jünger and Karoline Lampl. His father was a wealthy chemical engineer, and Ernst enjoyed a comfortable youth of attending boarding schools, writing poetry, and joining the Wandervogel movement—a youth movement that protested industrialization by encouraging young people to spend time in nature. Seeking adventure, he also ran away to join the French Foreign Legion, enlisting to serve in Algeria for five years, but being dismissed after several weeks due to his father’s intervention. The following year, on August 1, 1914, Ernst volunteered for the German army and was sent to the front lines at Champagne. During the war, Ernst distinguished himself both in combat and as a leader, and he received many battle wounds and many awards—including the Pour le Mérite, the highest military honor awarded by the German Empire. He also kept 16 volumes of diaries which were adapted to become Storm of Steel. After the war, he became a noted entomologist, married Gretha von Jeinsen, and had two sons. Although Jünger was a critic of the postwar Weimar Republic, he also rejected the growing Nazi Party’s attempts to win him over, twice turning down the offer of a Nazi seat in the Reichstag. Though he served as an army captain in World War II,  his role was limited to an administrative post in Paris. His reputation as a staunch nationalist led to the suppression of his writings after that war, but his image was rehabilitated in the 1950s, and he became a major figure of West German literature; he published more than 50 books during his lifetime, including dystopian and science fiction novels. An atheist for almost all his life, Jünger converted to Roman Catholicism shortly before his death at age 102.
Get the entire Storm of Steel LitChart as a printable PDF.
"My students can't get enough of your charts and their results have gone through the roof." -Graham S.
Download 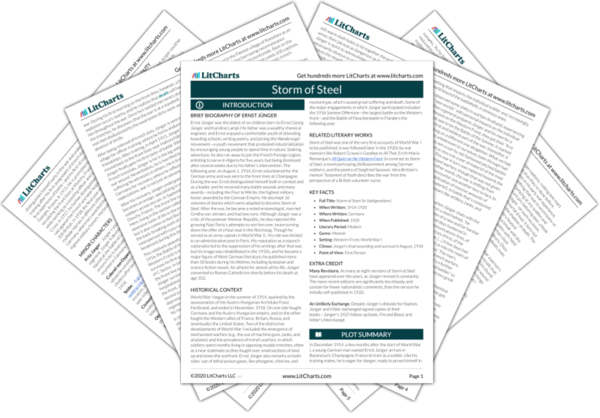 Historical Context of Storm of Steel

World War I began in the summer of 1914, sparked by the assassination of the Austro-Hungarian Archduke Franz Ferdinand, and ended in November, 1918. On one side fought Germany and the Austro-Hungarian empire, and on the other fought the Western allies of France, Britain, Russia, and (eventually) the United States. Two of the distinctive developments of World War I included the emergence of mechanized warfare (e.g., the use of machine guns, tanks, and airplanes) and the prevalence of trench warfare, in which soldiers spent months living in opposing muddy trenches, often at a near stalemate as they fought over small sections of land up and down the warfront. Ernst Jünger also remarks on both sides’ use of lethal poison gases, like phosgene, chlorine, and mustard gas, which caused great suffering and death. Some of the major engagements in which Jünger participated included the 1916 Somme Offensive—the largest battle on the Western front—and the Battle of Passchendaele in Flanders the following year.

Other Books Related to Storm of Steel

Storm of Steel was one of the very first accounts of World War I to be published; it was followed later in the 1920s by war memoirs like Robert Graves’s Goodbye to All That, Erich Maria Remarque’s All Quiet on the Western Front (in contrast to Storm of Steel, a novel portraying disillusionment among German soldiers), and the poetry of Siegfried Sassoon. Vera Brittain’s memoir Testament of Youth describes the war from the perspective of a British volunteer nurse.
Key Facts about Storm of Steel

Extra Credit for Storm of Steel

Many Revisions. As many as eight versions of Storm of Steel have appeared over the years, as Jünger revised it constantly. The more recent editions are significantly less bloody, and contain far fewer nationalistic comments, than the version he initially self-published in 1920.

An Unlikely Exchange. Despite Jünger’s distaste for Nazism, Jünger and Hitler exchanged signed copies of their books—Jünger’s 1925 follow-up book, Fire and Blood, and Hitler’s Mein Kampf. 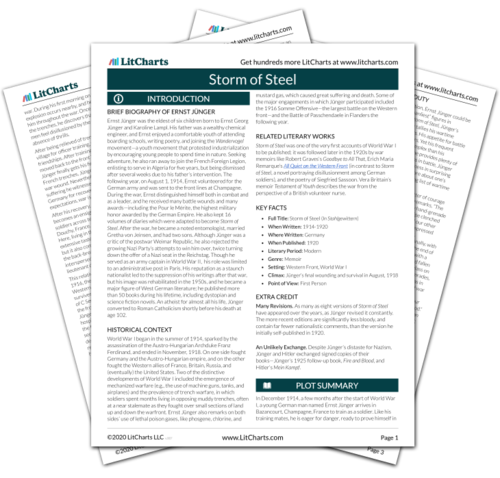 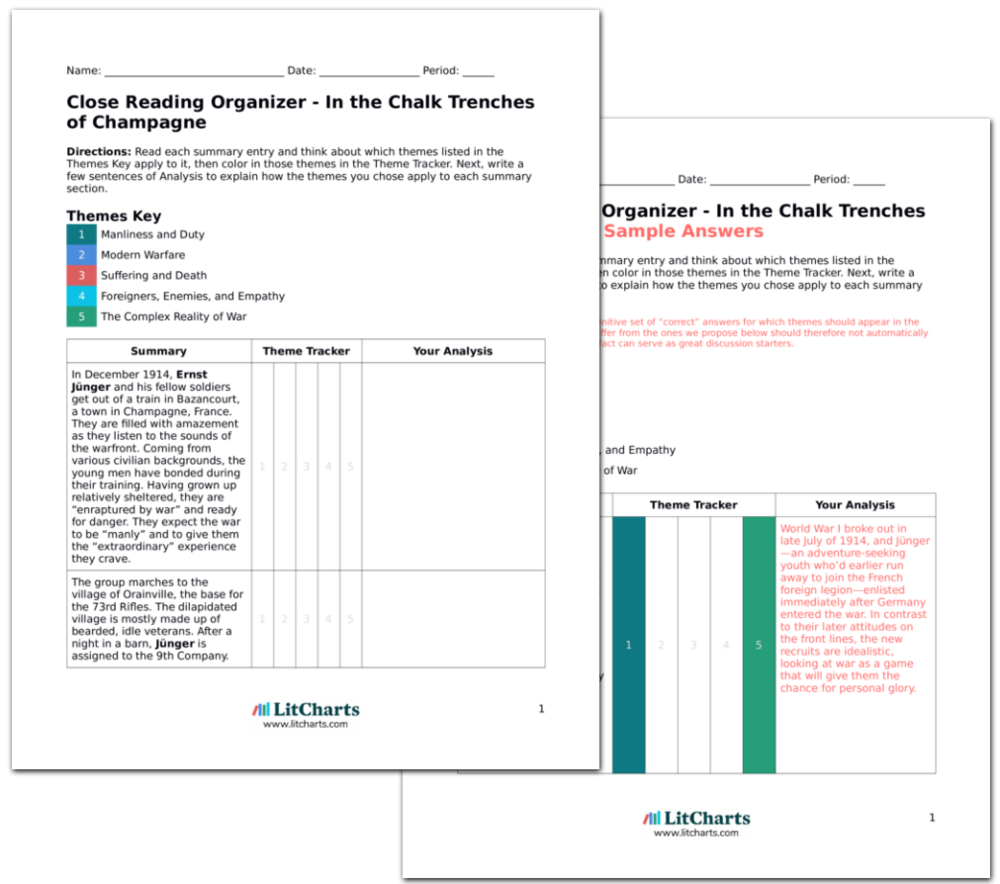